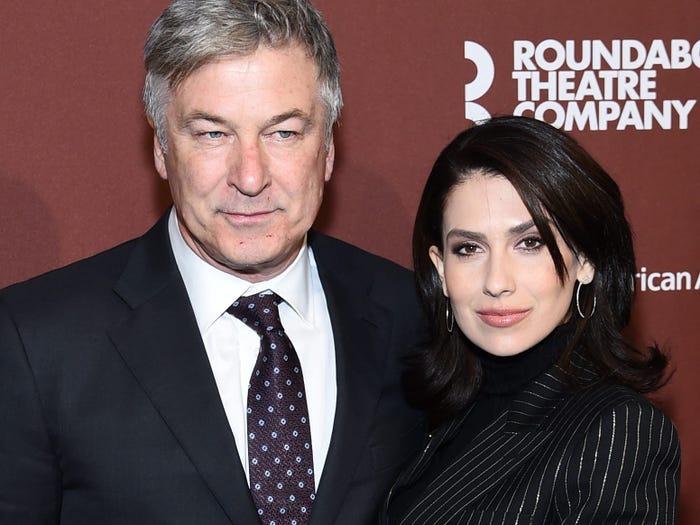 In a rambling Instagram video posted on Sunday, Alec Baldwin defended his wife Hilaria Baldwin after people on social media accused her of faking her Spanish heritage and accent.

"We live in a world now where we're hidden behind the anonymity of social media. People feel that they can say anything. They can say anything," Alec said. "They probably would like to do anything if they weren't at risk of getting caught and going to prison."

"Because they can't do that, because that involves real commitment to do something, to express those feelings," he continued, "they say things, no profile picture very often, sometimes yes, no identifying features there, hidden behind the anonymity of social media, they want to just shoot it all over you and spray it all over you, their venom and their hate."

The "30 Rock" actor concluded his message by urging followers to "consider the source" of news reports and social media chatter.

"There's things that have been said lately about people that I love, that I care about deeply, which are ridiculous. I mean, just ridiculous," Alec said.

Alec's video comes after social media uproar over Hilaria's Spanish heritage reached a fever pitch in the past week.

When Hilaria posted an Instagram video on Wednesday, followers noticed that she was speaking with a very American accent — in contrast to past interviews in which she had a Spanish accent.

Around the same time, a Twitter thread by user @lenibriscoe, in which they said Hilaria was "impersonat[ing] a Spanish person," went viral.

The thread included numerous instances of Hilaria speaking with a Spanish accent, which @lenibriscoe implied was "fake" since Hilaria "grew up in Massachusetts." Also included in the thread was a breakdown of Hilaria's family history — used by some as further evidence that she was "faking" her Spanish heritage.

In the first, she tells viewers that "there's some stuff that needs to be clarified," and says her past explanations of her upbringing weren't always reported correctly. Hilaria then goes on to reveal that she was "born in Boston," but spent her childhood in both Spain and the US.

According to Hilaria, she is bilingual, but her accent changes depending on what language she's been speaking most recently or if she's "nervous or upset."

"We celebrate both cultures in our home," she added in an Intagram caption. "Alec and I are raising our children bilingual, just as I was raised. This is very important to me. I understand that my story is a little different, but it is mine, and I'm very proud of it."

And in yet another Instagram video posted shortly thereafter, Hilaria doubled down on her defense of her upbringing, telling followers she was going to go through the backlash "point by point."

"My thing is about being authentic and when people say I'm not being authentic, it hurts my feelings … I don't really understand why this is turning into such a big thing," she said Sunday.

"I want to take it seriously, but I also don't want it to be all of a sudden I'm apologizing for who I am. Because at this point, I'm starting to feel that I'm being attacked for who I am, and that no answer is the right answer," she added.

Insider reached out to reps for both Alec and Hilaria, but didn't hear back immediately.