In 2009 Yael Aflalo, a model turned fashion entrepreneur, opened a vintage clothing resale business she ran part time from the back room of a Los Angeles retail store. Called Reformation, it sold stylish secondhand items or garments made from repurposed materials.

In 2013, the brand was scaled into an e-commerce business with a downtown factory and three boutiques — a vision honed by Ms. Aflalo’s experience, gained earlier in her career, of the environmental and human toll the global fashion industry was taking.

“I want to build a ‘conscious’ mega brand that proves fast fashion and sustainability can coexist,” she wrote in a journal entry at the time. “I want to work with smart talented people, grow a sustainable manufacturing facility and revolutionize the fashion industry.”

Several years on, Reformation has expanded to meet those ambitions, fueled by $37 million in two rounds of funding raised from investors including Stripes Group, 14W and Imaginary Ventures.

This week, it also gained a major new shareholder. Permira Advisers, a global private equity firm and previous stakeholder in the luxury brands Hugo Boss and Valentino, said it would acquire a majority stake in Reformation. The label is now a brand of choice for mindful female millennial shoppers who like its humorous and informative Instagram marketing and its celebrity following, and who are willing to spend between $60 and $550 on its flattering skater skirts, billowy blouses and floral dresses in eco-friendly fabrics.

Sales are projected to exceed $150 million in 2019, the company said. Although it is profitable, a spokeswoman declined to confirm specific figures. 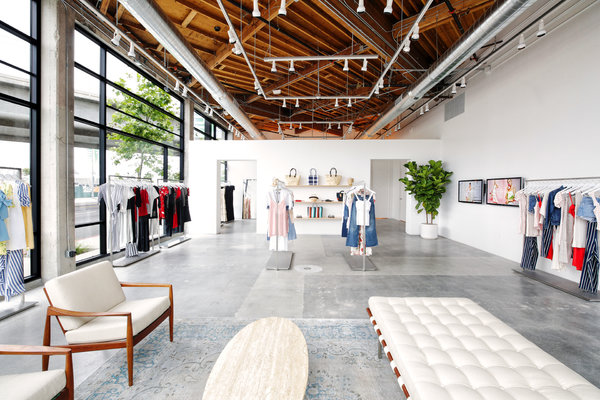 Permira said Wednesday that the deal, made through a company backed by its money, was expected to be completed in the third quarter. Ms. Aflalo will remain chief executive officer and a significant owner of the company. The move will fortify its stable of consumer businesses, which include the footwear label Dr. Martens (around which there is speculation of an impending sale or initial public offering).

The Reformation deal is the latest in a series of transactions that underscore growing private equity interest in a new generation of contemporary fashion businesses. This comes despite a historically checkered run of investments at the high end of the sector, buffeted by volatile growth patterns, fragmented demand, long turnaround times and dependence on creative directors’ output.

Permira declined to disclose either a valuation for Reformation or what it had paid.

“We feel that the business has reached a stage where we need a significant partner in order to really grow and meet our ambitions, be it entering into new international markets or opening new stores or developing new product lines,” Ms. Aflalo said this week. She added that she had been “shocked” that some prospective investors “still see sustainable fashion as a fad.”

“Permira was very convincing in proving to us that they respected our values and that they had a great deal of past experience in helping brands achieve what we want to achieve,” she said. “We are excited for all that comes next.”

Traditionally, private equity firms have profited by selling companies’ real estate or using debt to pay themselves dividends before exiting through an initial public offering or a sale. In 2012, Tamara Mellon, a co-founder and former chief creative officer of Jimmy Choo, a shoe brand that passed through the hands of three private equity owners, complained about the firms’ short attention spans.

“They say, ‘We want to hold this long term, and we’re going to help you nurture and build this brand.’ The day after signing, they talked about selling the business,” she said.

Some investors also found themselves disappointed. Luca Solca, a luxury analyst at Bernstein, said many private equity firms realized that the fast growth and high margins enjoyed by a handful of big brands were far from ubiquitous. For every successful private-equity exit from the fashion sector over the past decade, there have also been numerous high-profile letdowns, such as at Roberto Cavalli, Jack Wills, J Crew and Valentino.

In 2012, Permira, which acquired Hugo Boss and Valentino as part of a 5.3 billion-euro deal, sold the Valentino unit for €710 million, having effectively written down its investment in the Italian luxury house by more than half by the end of 2009. That sale allowed Permira to pay down the debt on Hugo Boss as it reduced its holdings in the German brand, leading to a sale of its remaining stake in 2015. It made 2.3 times its investment.

“High fashion in particular was where private equity found its greatest challenges, which was no wonder given global retail economics, and that creative success can be a hit-and-miss business,” Mr. Solca said. “In particular, many firms failed to recognize the importance of scale. All is easy when you are big. Those who focused on growing small brands in order to create new value for shareholders, however, found it could be very difficult and expensive.”

But with few luxury opportunities left and millennials, price wars and the rise of e-commerce driving big changes in the retail and consumer market, private equity now appears to be trying its luck once again with contemporary fashion.

A 2018 survey by Deloitte showed that, as firms embrace these midsize businesses, average deal values in the fashion and luxury sector have significantly decreased in recent years while still presenting an increase in returns on investments. Nearly 90 percent of private equity funds had considered an investment in a fashion and luxury asset as part of their 2018 investment strategy, the report said.

So what sort of companies have become top targets? Consider the likes of the streetwear label Supreme, in which Carlyle made an investment in 2017, and the fashion e-commerce retailer Matchesfashion.com, in which Apax Partners acquired a majority. Contemporary fashion brands with strong omnichannel sales and social media presence like Ganni, Isabel Marant, SMCP and the Kooples have been subject to a recent string of private equity stake building or buyouts.

“Growth in the midprice area of fashion is apparent, and — most importantly — it is also more easily predictable,” Mr. Solca said, adding that he expected more such investments to come.

To David Brisske, the principal at Permira who led the Reformation deal, the opportunities offered by the contemporary fashion market segment are plentiful. Ms. Aflalo’s company encapsulates many of most important characteristics the firm currently seeks from consumer investments with a strong digital focus.

“Reformation offers consumers a distinctive, empowering voice and is also a leader in the sustainable fashion movement — a fast-moving growth market — at a time when shoppers increasingly want both great product and a company that they can interact with and that shares their values,” Mr. Brisske said.

With its banner “Sustainable Fast Fashion,” Reformation has an agile, Zara-like production model that was another major draw. The company produces 15 to 20 new styles on a weekly basis, with most of its clothing moving from sketch to store hanger in less than four weeks, rather than the six months of the conventional fashion cycle. This minimizes inventory waste and allows for constantly fresh items at a time when consumer appetite for newness is soaring.

Reformation’s packaging is made from 100 percent recycled paper products or bio-based materials, and its RefScale tool allows customers to track each product’s environmental footprint by adding up the pounds of carbon dioxide emitted, gallons of water used and pounds of waste generated. Both features have proved extremely popular, according to the founder.

“We cater for a powerful customer who wants to be both brand- and style-conscious but also be a good person,” said Ms. Aflalo, who now has 500 employees and 14 stores, with new boutiques opening in Canada this week and in London in the fall.

“I have said it before, and I’ll say it again: I want altruism and narcissism to be combined.”

Elizabeth Paton is a reporter for the Styles section, covering the fashion and luxury sectors in Europe. Before joining The Times in 2015, she was a reporter at the Financial Times both in London and New York. @LizziePaton