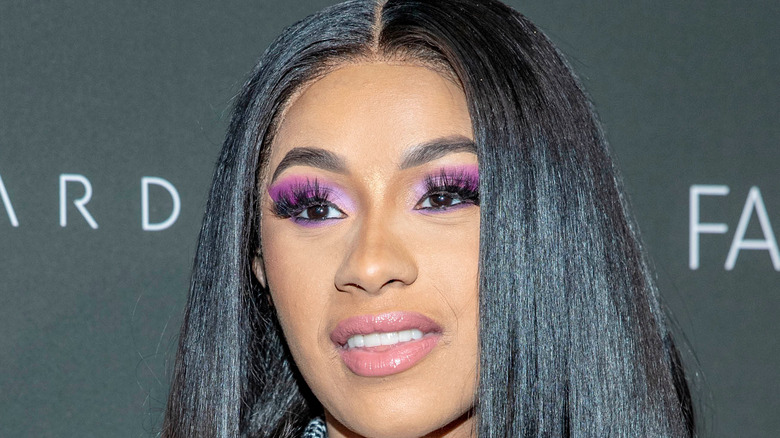 Cardi B has a tremendous presence. Everywhere the 28-year-old goes, her larger-than-life personality shakes things up. Cardi is very expressive and creative, so it makes sense that she’s a fan of getting tattooed. Cardi, whose full name Belcalis Marlenis Almánzar, loves to show off her body art in her performance outfits.

Altogether, Cardi has 10 tattoos. Three of those tattoos were men’s name, she revealed during an appearance on “The Ellen DeGeneres Show.” “I have like three different men tatted on me, you know what I’m saying? They gotta go!” she told the talk show host (per PopSugar).

One of those men’s names was Samuel, which was tattooed on the back of her neck in red ink. Cardi has never commented on the ex the tattoo belongs to, but she did have it covered up with a beautiful, colorful butterfly in June 2020. Another is ex-boyfriend Tommy Geez, who Cardi was on and off with throughout her time on “Love & Hip Hop: New York” (per Style Caster).

Of course, Cardi also has “Offset” tattooed, the rap persona of husband Kiari Cephus (per Insider).

Cardi also has tattoos on her arms 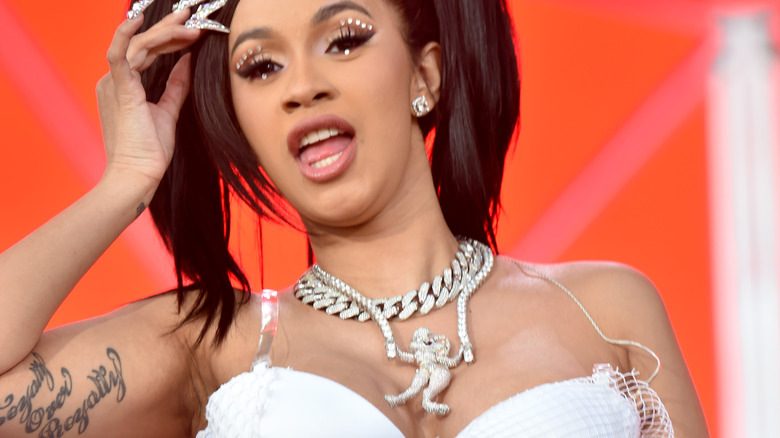 On her right arm, Cardi B has a tattoo that reads “loyalty over royalty” (per Body Art Guru). Cardi has never explained that tattoo, but many believe it’s commenting on keeping those who have been there for you closer than those who become close to you after you’re rich or famous.

On the inside of Cardi’s left bicep, she has sister Hennessey’s name tattooed. The adorable name tattoo is decorated with three roses, all in black and grey. It’s a sweet tribute between sisters who are really close and love each other.

Love also lives on the tattoo behind Cardi’s right ear. It shows the American Sign Language for “I love you” with a little red star next to it (per Cosmopolitan).

Cardi's biggest piece is the peacock on her right side 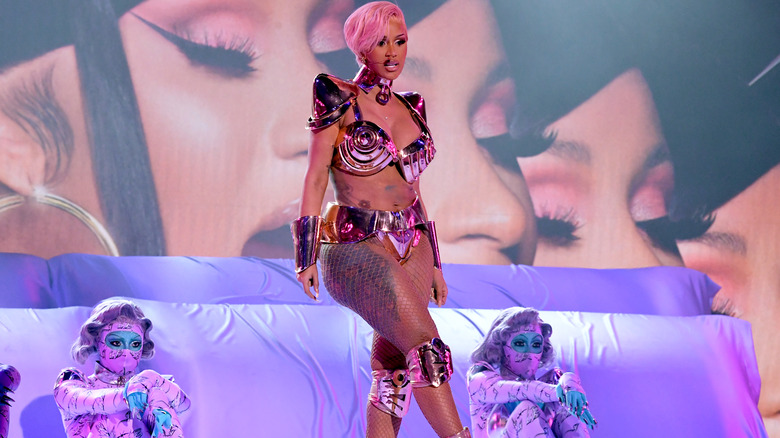 Cardi B has a massive peacock tattoo that takes up a good portion of the right side of her body (per People). She originally got the ink done in 2010. To celebrate 10 years of the tattoo, she got it touched up, revealing it in June 2020. “This whole week I been takin’ hours of pain getting tatted,” Cardi revealed on Instagram, where she thanked artist Jamie Schene.

Just a month prior, Cardi unveiled another big tattoo she got from Schene. “Okay guys! Soooo here it is!” Cardi captioned a video showing a detailed look at the large piece. “It took me several months but I’m finally finished. This is my back tattoo! It goes from the top of my back to the middle of my thigh. Thank you @jamie_schene.”

Schene went into further detail about the undertaking in a repost to his Instagram. “Thank you @iamcardib ! 60+ hours, more than 10 cities, it was an awesome project and a crazy experience. Thanks for the dedication, strength, and hospitality,” he wrote, in part.

Cardi has two other tattoos 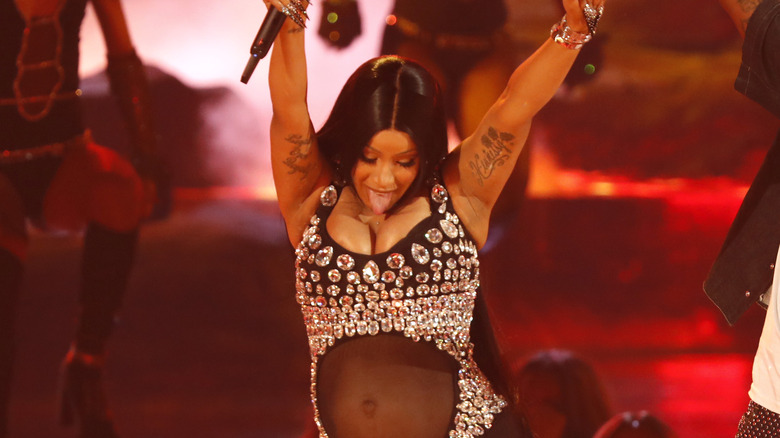 Cardi B has just two other tattoos. On her inner right wrist, she has “Belkis.” It’s believed to be a derivation of her full name, Belcalis (per Body Art Guru). Cardi’s never commented on the tattoo, but some have speculated it may be a reminder to stay true to who she really is.

The last tattoo is a small cheetah, positioned on the left side of her waist. It seems like this may have been one of Cardi’s earlier tattoos, despite the fact she’s never commented on when or why she got it (per Net Luxury). Some have suspected she may regret the tattoo, since it’s arguably the least seen of Cardi’s tattoos. Still, she’s made no moves to cover it or have it removed.

Cardi’s tattoos cover a lot of different sizes and styles. It’s clear she’s not afraid to add to or tweak her body art, so chances are we’ll see more tattoos from the rapper in years to come.