Cody Simpson reflected on his experience preparing for the Olympic swim trials in Australia with ‘less than a year of training,’ sharing his gratitude to his team and revealing his plans for the future.

Cody Simpson won’t be going to the Tokyo Olympics in a few weeks. The singer-turned-athlete, 24, qualified for the final of the Australian Olympic swim trials on Thursday, June 17, but was edged out by his compatriots. Cody finished his Olympic run by posting a 52.94 seconds swim, which was over the 51.7 seconds mark to qualify, per Yahoo Sport.

Despite the setback, Cody was still incredibly proud of what he had accomplished and took to Instagram on June 17 to share his thoughts. “What an experience racing at my first Australian Olympic Trials. To make a final was our goal this year and with less than a year of training we did just that,” Cody wrote in the caption to his post, which featured a photo of the swimmer in the pool with his goggles and Speedo swim cap on. 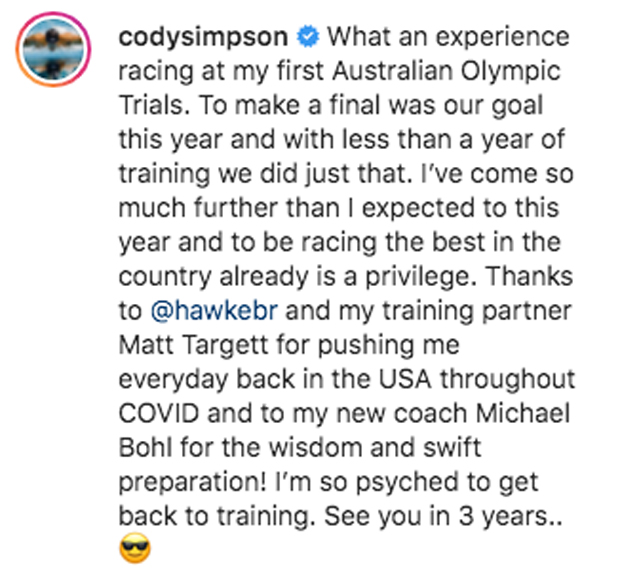 “I’ve come so much further than I expected to this year and to be racing the best in the country already is a privilege,” Cody continued. “Thanks to [Brett Hawke] and my training partner Matt Targett for pushing me everyday back in the USA throughout COVID and to my new coach Michael Bohl for the wisdom and swift preparation!”

For fans who were concerned that this was the last time they’d see Cody on a journey to go for gold, the Aussie confirmed that he would be back in the coming years, and even hinted at another Olympic run. “I’m so psyched to get back to training. See you in 3 years,” Cody wrote, teasing that his swimming career is just getting started.

Cody was rigorously training for a number of months prior to his recent defeat at the Australian Olympic swim trials final. Along with spending hours in the pool each and everyday, Cody completely adjusted his diet and lifestyle in order to fully commit to his goals. Although he didn’t make the cut this year, fans can rest assured knowing the star is heading back to training and gearing up for the 2024 Olympics in Paris!