Sean ‘Diddy’ Combs’ twin daughters, D’Lila Star and Jessie James, shared the sweetest birthday message to their dad on November 4, telling the music mogul how much they ‘love and appreciate’ him.

It seemed that Sean ‘Diddy’ Combs had one of the best birthdays ever on November 4! The music mogul celebrated his 51st birthday with a slew of happy wishes sent his way, including from his own youngsters. In the late hours of November 4, Diddy’s 13-year-old twin daughters — D’Lila Star and Jessie James — took to their official Instagram account to wish their dad the happiest birthday. 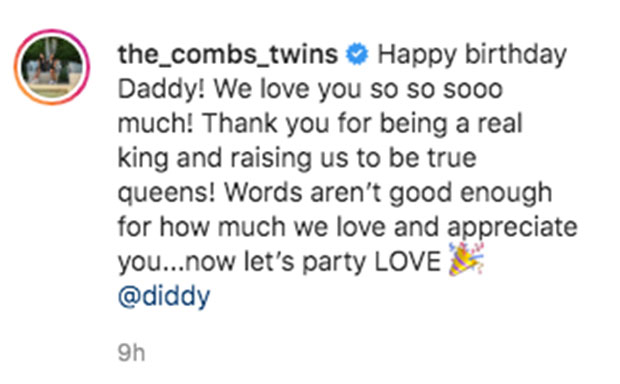 In the post, D’Lila and Jessie shared a throwback photo of their dad on, what appeared to be, a talk show. D’Lila and Jessie were dressed in matching pink and black tracksuits and were just toddlers at the time the photo was taken! But it was the message from the twins that totally pulled at the heartstrings of their fans and Diddy’s longtime admirers.

“Happy birthday Daddy! We love you so so sooo much! Thank you for being a real king and raising us to be true queens! Words aren’t good enough for how much we love and appreciate you…now let’s party LOVE,” the 13-year-olds wrote in the caption. It was such an adorable message from the youngsters, and we can only image how touched their dad was by the endearing, heart felt words.

Diddy shared his beautiful girls with their late mother Kimberly Porter. Kim and Diddy had an on-again, off-again relationship that lasted from 1994-2007. In that time, the couple welcomed their son Christian, born in 1999, and their twin daughters. Although they officially split in 2007, Diddy always remained friendly with and supportive of his former love. But the family was struck with unimaginable tragedy just over 10 years later.

Kim sadly passed away on November 15, 2018 after battling pneumonia. In the time following her death, Diddy has paid tribute to his dearly departed love by sharing images of the gorgeous model and actress throughout her life. Although the music mogul has surely experienced a lot of pain in the last few years, having his incredible kids by his side to celebrate his special day has definitely brought so much joy to his life!