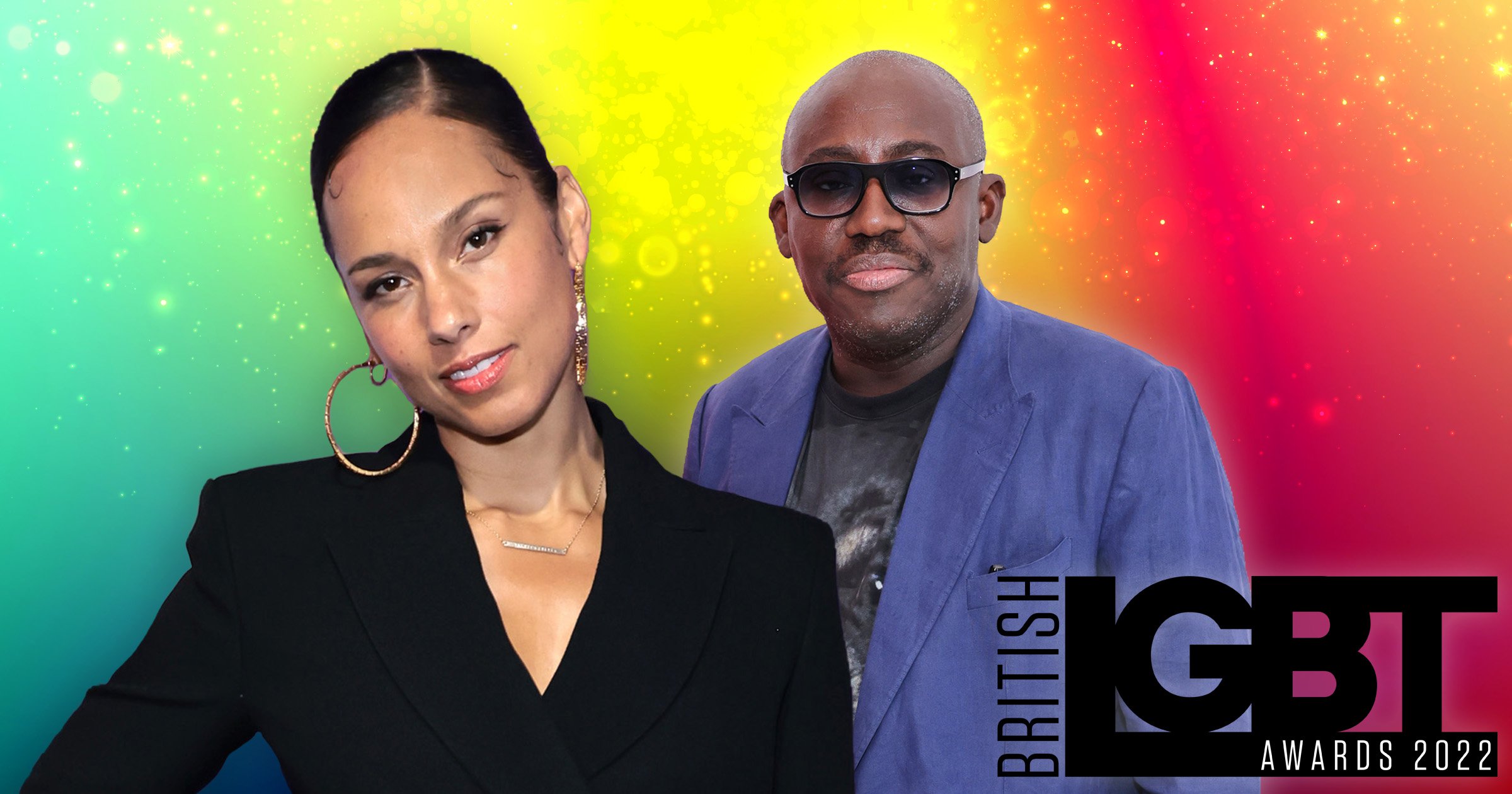 The British LGBT Awards 2022 have honoured an array of influential and inspiring individuals, with people including British Vogue editor-in-chief Edward Enninful OBE and singing superstar Alicia Keys among the big winners of the event.

Meanwhile, Alicia – who recently performed at the Queen’s Platinum Jubilee Concert – delivered a special video message when she was awarded the Celebrity Ally of the Year prize at the award ceremony.

Enninful, who recently helped break the internet with British Vogue’s stunning cover spread for Beyoncé ahead of her new album release, was dubbed Global Media Trailblazer, an award he was given by model Munroe Bergdorf.

In his acceptance speech, he said: ‘I am so honoured to be part of the 2022 LGBT Awards, especially as the UK celebrates 50 years of pride.

‘Growing up as a young, Black gay man in West London, I could only have imagined the day when events like this would celebrate people like me, and the other incredible trailblazers recognised tonight. My hope is that we all continue to push for positive change for the next generation.’

Alicia was given her Celebrity Ally of the Year prize by British singing legend Lulu, beating Liverpool manager Jurgen Klopp and Harry Potter actor Daniel Radcliffe after a public vote.

In her video message, she said that ‘on a personal level’, she felt ‘honoured’ to accept the award.

‘I’ve been blessed to know all kinds of people since I was a little girl and fortunately exposed to the beauty and richness of diversity. That’s all colours, all religions, all styles, all beliefs, all loves, all people,’ she said.

‘Believe me, I know that hate is taught and judgement is taught, but we are the light and we are the love. I sometimes can’t believe how much hate there is to overcome, but where there is light and love, darkness and hate cannot exist.’

The Empire State of Mind singer emphasised how the ‘powerful LGBTQI+ community has a lot to fight for, stand up to and care about’, adding: ‘So just like all of you here tonight, I am here with you to keep showing up, representing and reminding each other we are not alone.’

She continued: ‘You’ll never be alone and we have to show each other we’re all here for each other, let’s scream at the top of our lungs everyone deserves love, kindness, equanimity and most of all respect! Period, end of story.

Olympic diver Tom Daley picked up the gong for Swinton Insurance Sports Personality of the Year, while Dame Kelly Holmes – who recently came out as gay after 34 years – made a surprise appearance to present LGBT+ Celebrity award to Lady Gaga.

Steps won Music Artist of the Year, with Rylan being given Broadcaster of the Year and Strictly runners-up Johannes and John winning Media Moment of the Year, a prize given to them by judge Shirley Ballas.

BBC Radio 1’s Adele, who has been open in recent months about her bowel cancer diagnosis, won Role Model of the Year, while Lego Group won Best Brand or Marketing Campaign and Natwest’s Rishi Madlani received the Inspirational Leader prize.

Award host Sue praised all those who had been honoured at the ceremony, saying: ‘Well done to all of the incredible winners and nominees, it was fantastic to be a part of this fun yet hugely important ceremony.’

Sarah Garrett MBE, the founder of the British LGBT Awards, said they were ‘delighted to be able to host a celebration of the people working hard to advocate for and advance LGBT+ rights’, adding: ‘All of the winners and nominees are incredibly deserving.’

Rachel Palmer, EMEA chief operating officer and LGBTQ+ executive sponsor at Macquarie Group, sponsors of the British LGBT Awards sponsors, said they were ‘so proud to be part of such an important event for the LGBT+ community, supporting and celebrating all the incredible role models and change makers who have been awarded and nominated this year – congratulations’.

A spokesperson for Tesco, also sponsors of the event, said: ‘Everyone at Tesco is very proud to support the British LGBT Awards. The ceremony was a true celebration of inspiring individuals, highlighting the incredible contributions of those creating an inclusive world.

‘We are grateful to everyone involved for being part of this memorable event and helping to shine a light on every aspect of the LGBT+ community and its allies. A big congratulations to the deserving nominees and the winning individuals and organisations.’

Full list of winners at the British LGBT Awards 2022

This year marks 50 years of Pride, so it seems only fitting that Metro.co.uk goes above and beyond in our ongoing LGBTQ+ support, through a wealth of content that not only celebrates all things Pride, but also share stories, take time to reflect and raises awareness for the community this Pride Month.

And we’ve got some great names on board to help us, too. From a list of famous guest editors taking over the site for a week that includes Rob Rinder, Nicola Adams, Peter Tatchell, Kimberly Hart-Simpson, John Whaite, Anna Richardson and Dr Ranj, we’ll also have the likes Sir Ian McKellen and Drag Race stars The Vivienne, Lawrence Chaney and Tia Kofi offering their insights.

During Pride Month, which runs from 1 – 30 June, Metro.co.uk will also be supporting Kyiv Pride, a Ukrainian charity forced to work harder than ever to protect the rights of the LGBTQ+ community during times of conflict, and youth homelessness charity AKT. To find out more about their work, and what you can do to support them, click here.