Welp, all that speculation around Florence Pugh and Zach Braff ending their nearly 3-year ‘ship has officially come to a halt since Florence herself has set the record straight: They have indeed broken up.

As one of the four cover stars for Harper’s Bazaar‘s September 2022 issue, Florence gave a fair amount of intel on her and Zach’s breakup, which happened under-the-radar earlier this year. TBH, it’s no surprise that Florence and Zach kept the news of their split low-key since their entire ‘ship was fairly private, which made sense since the exes were regularly critiqued over their 21-year age gap. (Florence is 26 and Zach is 47.)

“We’ve been trying to do this separation without the world knowing, because it’s been a relationship that everybody has an opinion on,” Florence said in the interview. “We just felt something like this would really do us the benefit of not having millions of people telling us how happy they are that we’re not together. So we’ve done that. I automatically get a lumpy throat when I talk about it.”

Back in May 2022, rumors started swirling about whether or not Florence and Zach broke up, mainly after paps photographed her on an Ibizia beach with her Midsommar co-star Will Poulter. The Daily Mail said the actors were on the island for a luxury hotel opening (and to celebrate a friend’s birthday), so of course the internet just *assumed* Florence and Will were now a full-blown couple. It was…a lot, especially since Zach was allegedly chilling in Los Angeles while all of this was going down, according to Daily Mail. 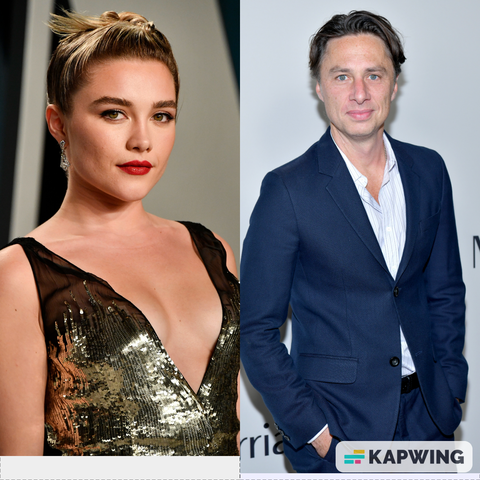 Florence later pushed back on all the gossip about her and Will in an Instagram Story, but she never addressed her and Zach’s status. She wrote: “This is getting a little silly now. No, Will Poulter and I are not dating. We went to the beach with our friends, who are always about a half a meter away from us in every picture, but have been cleverly cut out/framed out so that it looks otherwise. I understand that the nature of this job is that you sometimes get your privacy completely bulldozed by paparazzi, but to fabricate this stuff actually does more damage than good. Thanks for saying we look sexy.. doesn’t mean we’re doing the sexy.” 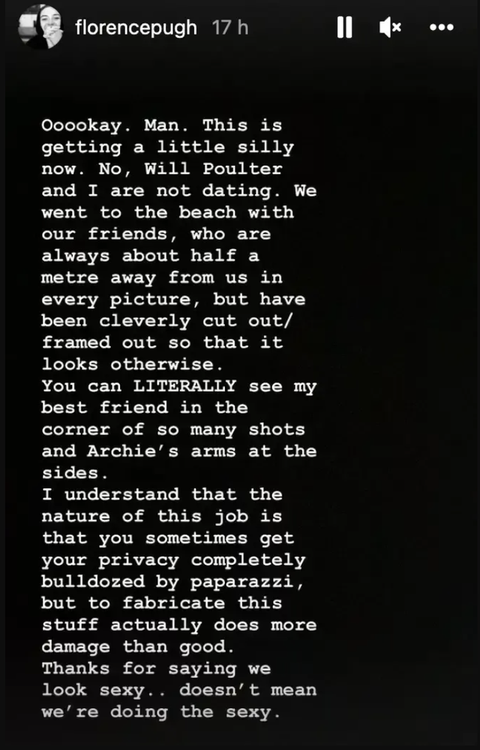 This PSA, coupled with an April birthday post to Zach on her Instagram Story, essentially quieted the rumor mill until today’s cover. In her interview with Bazaar, Florence was vocal about her distaste for the way the public consumes famous people’s private lives: “Whenever I feel like that line has been crossed in my life, whether it’s paparazzi taking private moments, or moments that aren’t even real, or gossip channels that encourage members of the public to share private moments of famous people walking down the street, I think it’s incredibly wrong,” she told the magazine. “I don’t think that people, just because they have this job, that every aspect of their life should be watched and written about. We haven’t signed up for a reality TV show.”

As far as A Good Person, the movie Florence and Zach made together (he wrote the script with her in mind and directed the project), it’s still set to be released next year. “The movie that we made together genuinely was probably one of my most favorite experiences,” said Florence in the interview. “It felt like a very natural and easy thing to do.”