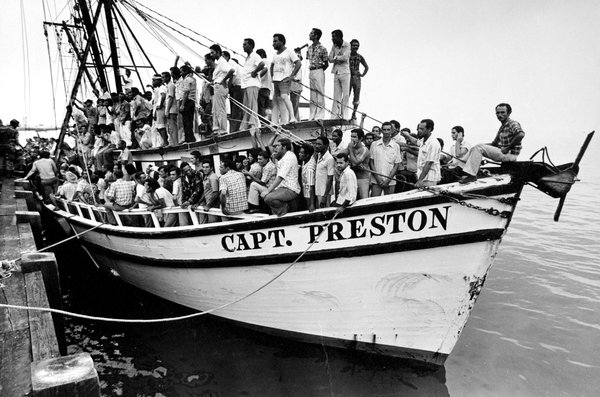 El Espace is a column dedicated to news and culture relevant to Latinx communities. Expect politics, arts, analysis, personal essays and more. ¿Lo mejor? It’ll be in Spanish and English, so you can forward it to your tía, your primo Lalo or anyone else (read: everyone).

On April 20, 1980, Fidel Castro, then the president of Cuba, proclaimed that any citizen who wanted to leave the island could depart from the nearby port of Mariel. In the six months that followed, nearly 125,000 Cubans journeyed across the Straits of Florida, including thousands of queer men and women fleeing persecution. Casimiro González and Manuel Rodríguez were among them.

Theirs is one of the many stories highlighted in Queer Miami: A History of L.G.B.T.Q Communities, a new exhibition at the HistoryMiami Museum tied to the 50th anniversary of the Stonewall Rebellion. Using archival footage, photographs and memorabilia, the curator Julio Capó Jr., an associate professor of history at the University of Massachusetts in Amherst, traces Miami’s L.G.B.T.Q history (and struggles) from 1890 to the present, including how the city was shaped by Cuban immigrants.

The Mariel boatlift was, among other things, a “homophobic purge,” said Dr. Capó Jr. “Fidel Castro claimed that those who wanted to leave were the dregs of society who could never be productive to the Cuban revolution,” he added.

Mr. González and Mr. Rodríguez met in a movie theater in Havana when they were in their 20s. They arrived in the United States in 1980, and, after nearly half a century together, they married in 2015. When I spoke to them over the phone, they alternated between finishing each other’s sentences and cracking jokes at the other’s expense. These are edited excerpts from the conversation.

What was the Cuban government’s attitude toward gay people in the ’70s?

GONZÁLEZ: It wasn’t safe for us. Police officers would often raid movie theaters. The lights would come on, and they’d round up anyone they didn’t like the look of into buses, and haul them off to jail. They’d do that at cabarets, too.

RODRÍGUEZ: When Fidel Castro said people could leave, I went to the Committee for the Defense of the Revolution, and told them I stole clotheslines, that I was a homosexual and was against the revolution. I really piled it on. Afterward I hid in my house for two days, afraid to even come near the window, while I waited for my exit permit. Mobs would throw eggs or worse at people like us. Casimiro would walk to my house to see me. On the third day a police officer in a motorcycle came by and called out my name, signaling that it was time for me to go. My mother had made me a steak sandwich, but I could barely get it down.

RODRÍGUEZ: It was almost 7 p.m. when I left Cuba on May 15, 1980. They piled 289 of us on a little shrimp boat. All but around 17 of us were prisoners the government had forced the boat owner to take with him. There was no space to sit or even puke if you got seasick.

GONZÁLEZ: After he left I stayed in bed, chain-smoked and drank coffee. I couldn’t eat anything. I finally got my exit permit 11 days later. Our boat ran out of gas and we drifted. Eventually we were rescued by an American military ship, a battleship. These doors opened up, and I was sure cannons would come out of them. Incredibly our boat went inside the belly of the ship. I thought, “This is the end! They’re going to make picadillo out of us and throw us back in the water!” But the Americans were nice to us. They gave us something to eat, and then I had the luxury of arriving in Miami in a helicopter.

RODRÍGUEZ: Llegó en estilo, but he didn’t have a penny in his pocket.

When you arrived, the United States was on the precipice of the AIDS crisis, and homophobia was rampant, yet you were free from the neighborhood watches back home. What was that like for you?

RODRÍGUEZ: I remember how free I felt. The first time we went dancing, we stood with our mouths agape. Men were dancing with men, women with women. We began adapting to all these things, which were new to us. Though back then the Latino community criticized people like us, so we were still very private. None of my co-workers ever knew.

GONZÁLEZ: He told them he was married in Cuba and that he left 40 kids behind! Things have changed so much since then. We lost so many friends to AIDS.

In the days before FaceTime and email, leaving home felt more permanent. Did you ever doubt your decision to leave? At this point you’ve lived in the United States longer than you did Cuba — do you feel American?

GONZÁLEZ: I didn’t know what would happen to us once we got here. I was scared. Then when we established ourselves, nostalgia set in. You longed for family, for Cuban things.

RODRÍGUEZ: Now I consider myself an American. This was the country I was destined to live in.

GONZÁLEZ: Yeah. You never forget your roots, but I feel American.

“Queer Miami: A History of LGBTQ Communities,” will be on view at the HistoryMiami Museum in downtown Miami, Fl., until Sept. 1.

?Ten Latinx artists and creative thinkers discuss how their culture influences their art.

?Instead of assimilating to Western style, Rarámuri women in Chihuahua, Mexico are using fashion to make a statement by wearing styles that reflect their indigenous culture.

?Damaris Hernández, the first Latina woman to make partner at a prestigious law firm, spends her Sundays shuttling from church to her daughter’s dance class before landing back home for dinner. “We’re Puerto Rican; we eat a lot,” she said. On the menu? “Rice, beans, avocado and carne or lasagna.”

Do you have suggestions for El Espace? Want to receive it as a newsletter? Let me know: [email protected]

Concepción de León is a staff writer covering news and culture for the Books section.