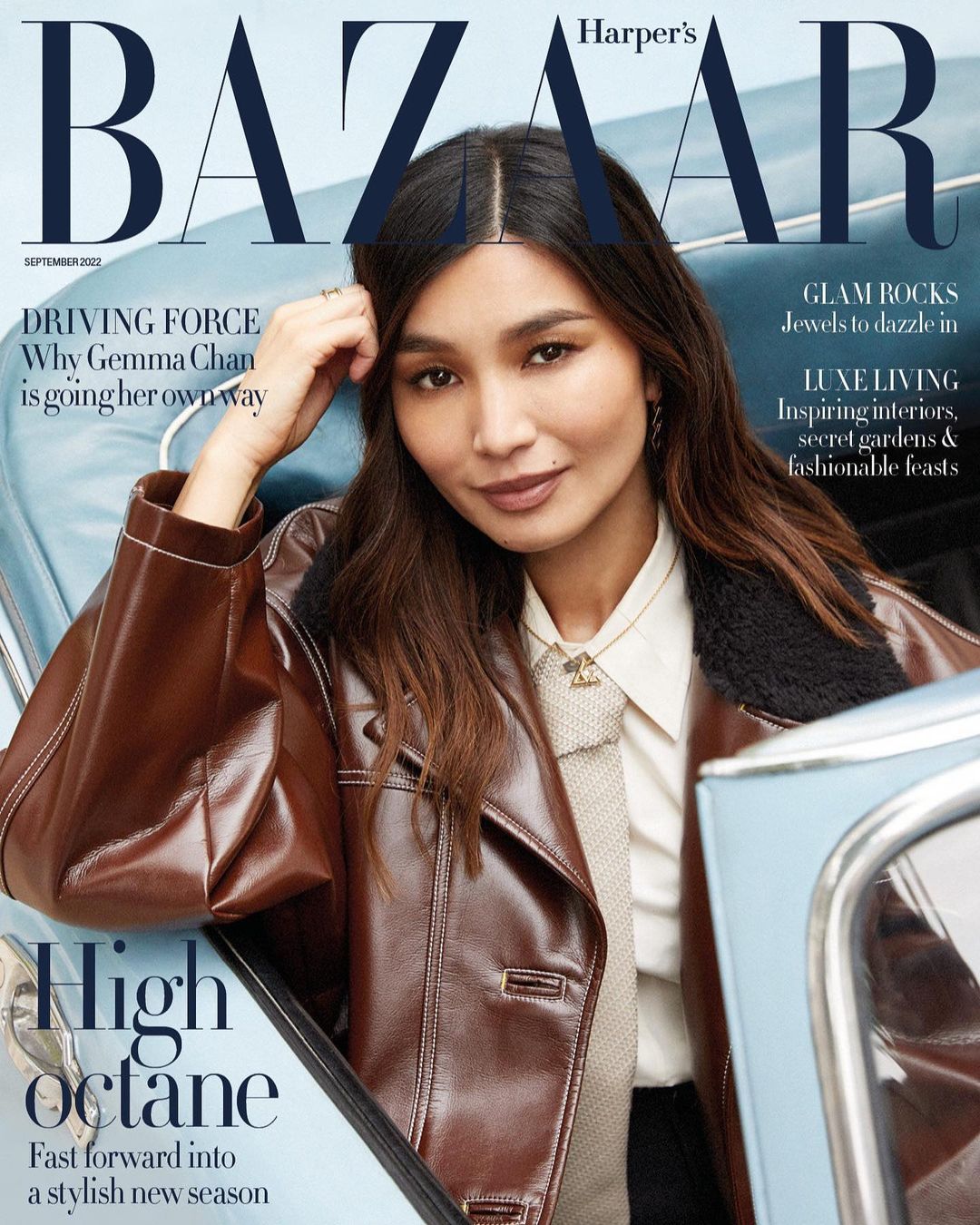 I think so much of Gemma Chan’s beauty, and I’m always interested to see what a team of professional stylists, hair and makeup artists and photographers will do with her for magazine editorials. Harper’s Bazaar UK got their hands on her and the cover shoot is a complete snooze. I am begging magazines to do dramatic editorials with Chan! Come on! Anyway, Gemma is promoting her roles in Don’t Worry Darling and AppleTV+’s Extrapolations. She chats about assimilation, being the daughter of immigrants, her long-time relationship with Dominic Cooper and more. Some highlights:

Working with Meryl Streep: “She is really lovely, but I mean – I wouldn’t want to get on the wrong side of her.”

Her early jobs playing sometimes-racist tropes: “You know what? At the beginning, the question was very much, ‘Will I be able to make a living? Will I be able to survive doing this job?’ I would do anything – bit parts, one-line parts… It’s really difficult in my industry to speak up, with the power structures that are there. I know you can be penalised in a way that means your livelihood has gone. Even if you try to do the right thing, speaking up against bad behaviour, all it takes is someone to interpret what you say the wrong way, or decide that you’re trouble… It’s a hierarchical, word-of-mouth kind of industry where, traditionally, bad behaviours have been indulged. There’s a lot of fear. It’s hard to change that culture. It takes years.”

Contributing to a book about British Asian people: “Reading East Side Voices, I was so emotional. It’s the book I wish existed when I was growing up. When you or I were young, it was just: assimilate.”

Red carpet qualms: “It’s still nerve-racking. You still have to sort of fake it a bit and just get through it. You know what? It is fun to get dressed up. But I’m also really happy and comfortable not doing that, and wearing sweatpants.” And, of course, as a child of the Nineties, there have been fashion mistakes. “I swear my sister and I were put in flammable shell suits, and then taken to a firework display. I’m lucky to be alive!”

Her private life: She lives a mile or two away in Primrose Hill (“I couldn’t live in the country – no Deliveroo…”) with her boyfriend, the actor Dominic Cooper, and their rescue cat Mr Kitty (“the most affectionate cat in the world!”). We talk a little about fame, and the responsibility she felt to speak out on behalf of the Asian communities during the pandemic. “I think I’m so fortunate to be in a relationship where we can talk about anything. Dom was very understanding and empathetic. I was quite open about how I was feeling during that time, and he was just incredibly supportive. I definitely didn’t feel I had to shoulder everything on my own. I’m really, really lucky.”

I don’t think Gemma should be “blamed” or criticized for taking some roles which were absolutely full of (racist) tropes about Asian women or Chinese immigrants. I remember seeing her at the start of her career in an early Sherlock episode and what stands out is that the WRITING was awful and Gemma did the best she could with the material. Plus, she’s right – she’s a working actress and there are so few roles out there for Asian actresses. I also love that she has a rescue kitty! I glanced through her Instagram to see if she ever posts photos of Mr. Kitty, but no, I didn’t see any. She mostly uses her Insta for work and charity.