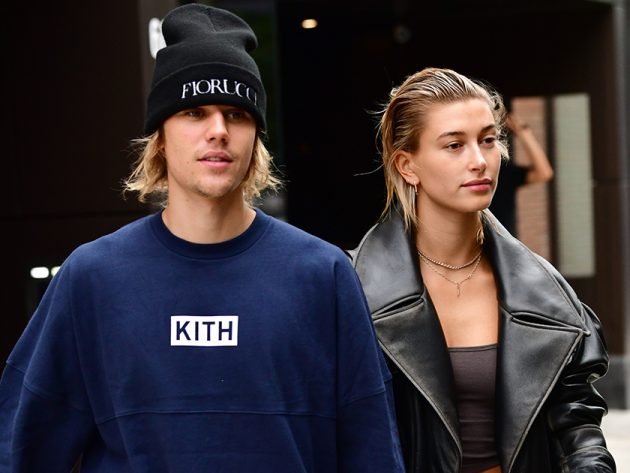 The model, who is the daughter of actor Stephen Baldwin, had a lavish wedding with singer husband Justin Bieber publicly earlier this year after tying the knot in secret last year.

Since then the celeb pair have been plagued with pregnancy rumours, with fans desperate for the couple to have a mini Bieber.

And this past week fans were convinced that the pair were expecting their first child after a photo was apparently circulating around the Internet that showed Hailey holding her stomach.

Husband Justin also took to his Instagram with a rather cryptic post that got fans speculating about a possible pregnancy.

In honour of his wife’s birthday last week, the Sorry singer shared a pair of sweet photos from the duo’s nuptials back in October – one of the couple sharing a kiss and another black and white snap of the gorgeous bride in her lace off-the-shoulder dress.

Alongside the picture, he wrote, ‘Happy birthday babes! You make me want to be better everyday! The way you live you life is so attractive.. ps you turn me on in every way 😍😍😍😍 next season BABIES’.

Happy birthday babes! You make me want to be better everyday! The way you live you life is so attractive.. ps you turn me on in every way 😍😍😍😍 next season BABIES

And fans were convinced that the way Justin ended his post meant that the pair were expecting a baby.

However, Hailey has now taken to her own social media to speak out about the pregnancy rumours, saying that she finds them ‘funny’.

The model, who is famously good pals with Victoria’s Secret angels Kendall Jenner and Gigi Hadid shared an Instagram story with her nearly 24 million followers to light-heartedly shut down the rumours.

‘The internet is funny!!’ she wrote. ‘No, I’m not pregnant I just really love food’.

So bad news for hopeful fans.

But lets hope we won’t have to wait too long to see some baby Biebers running around!