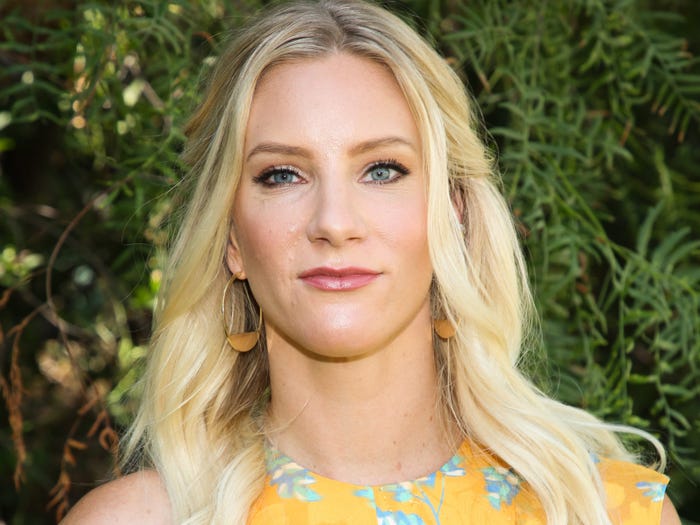 "Glee" star Heather Morris didn't hold back in her criticism of a fan's post commemorating the Fox musical comedy-drama, which put a vomiting-face emoji over her late costar Mark Salling's face.

A fan tweeted out a series of screen grabs from the show's 2010 episode "A Very Glee Christmas" to commemorate the episode's 10th anniversary.

"Ten years ago today 'a very glee christmas aired,'" they wrote on December 7. "Artie got his magic legs, we all fell in love with coach beiste, and brittany reignited the magic of christmas for everyone."

Kevin McHale, who played Artie on "Glee," shared the fan's tweet with his followers on Thursday, writing, "This album goes hard tho."

But Morris, who played Brittany on the show, took issue with the fact that the fan had covered Puck's face, the character that Salling played, with a vomiting-face emoji — an apparent reference to Salling's real-life arrest for possession of child pornography in 2015. The actor would later go on to plead guilty for the charge two years later.

"[T]he vomit on Marks face is offensive," Morris said in the replies to McHale's retweet.

After numerous Twitter users called her out over the comment, Morris doubled down in a series of tweets posted to her own page on Friday.

"I don't feel the need to ever justify something because some things are better left unsaid," she wrote.

While Morris noted that Salling's possession of child pornography was "unforgivable" for some people, she still urged fans to be respectful of the actor, who committed suicide in 2018 while awaiting sentencing for his possession charge.

"We did not loose just 2 cast members, we lost 3," Morris continued on Twitter. "And it is SO incredible [sic] tough to have to act like that 3rd one is invisible, because even though his actions are unjustifiable, he was a part of our family at one point and he was mentally SICK."

"Although I don't want to have to say all that, its truthful," the actress wrote in another tweet, concluding her message by sarcastically thanking fans for treating her with "such disrespect and unkindness during a time that I can't get through a day without balling my eyes out at the loss of my entire 'Glee' family."

In addition to Salling, several other "Glee" cast members have died in the years since the show premiered in 2009. The hit Fox musical-dramedy ran for six seasons before going off the air in 2015.

Cory Monteith, who played quarterback-turned-glee club star, Finn Hudson, on the show, died in 2013 from an overdose of heroin and alcohol. He was 31.

And earlier this year, "Glee" star Naya Rivera accidentally drowned while boating with her young son on California's Lake Piru.

Morris, who played Rivera's onscreen best friend on "Glee," posted a heartfelt tribute to the actress on Instagram following her July drowning.

"I know you're still with me and even though I'm feeling greedy that we don't get more time together, I cherish every moment we had and hold it close to my heart," Morris said then.