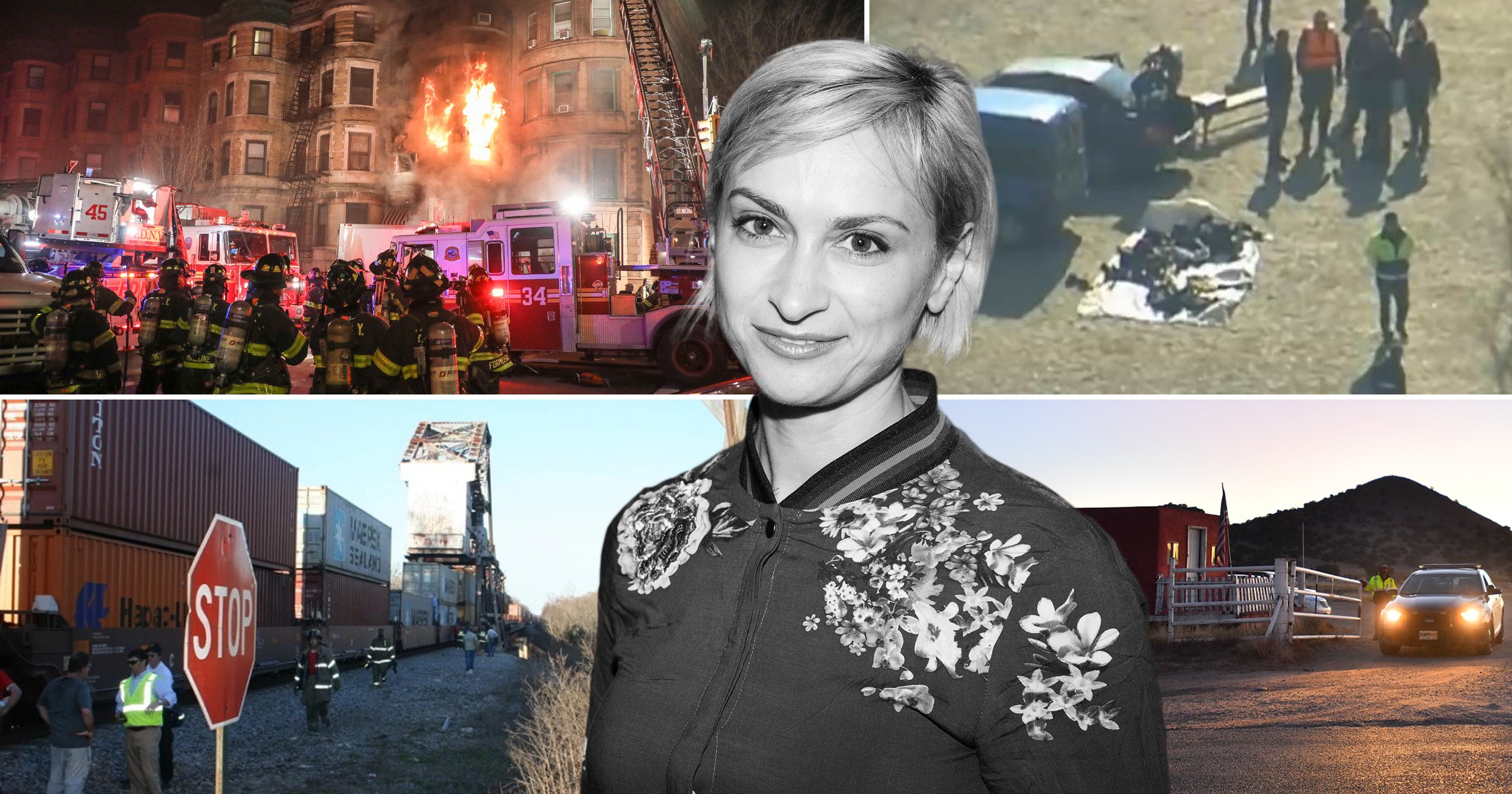 Halyna Hutchins, a cinematographer on upcoming film Rust, is the latest crew member to die during the production of a Hollywood film, after accidentally being shot by Alec Baldwin.

The 42-year-old had been killed when a prop gun Alec had been holding went off accidentally, also injuring director Joel Souza, who was later released from hospital.

Investigation is ongoing into how the tragic incident occurred on the set in New Mexico, but it is not the first time an actor or crew member has been fatally injured on set.

While rare, there have been many fatal incidents during production of Hollywood movies, as actors and crew work with death-defying stunts and dangerous props.

Here is a look back at some of the worst tragedies to occur during filming:

1994 – Brandon Lee fatally shot on set of The Crow

Legendary martial arts star Bruce Lee’s son Brandon Lee lost his life at the age of 28 during filming for The Crow, after he was shot during a take.

In the scene, his character was set to walk in to his apartment to find his fiancée being attacked, before the intruder fires a gun at him.

The prop gun, which was a real Smith & Wesson revolver, had been loaded with improperly crafted dummy rounds which were made to mimic real bullets in close-ups.

The cartridges were supposed to have the powder charges removed, but the crew had failed to remove the primer, meaning one of the rounds was fired.

Although there was no powder cartridge, the energy from the ignited primer separated the bullet from the casing and pushed it up into the gun barrel where it got lodged, and while the dummy cartridges were removed and replaced by blanks for the take, the gun was not properly checked and cleared.

When it came to filming, the gun was due to be fired from 12ft away, but the bullet lodged inside the weapon was discharged and struck Lee in the abdomen.

He was rushed to hospital but died after six hours of surgery, which was unable to save his life.

A tragic accident on set of The Twilight Zone: The Movie claimed the life of actor Vic Morrow as well as two child actors, Myca Dinh Le, seven, and Renee Shin-Yi Chen, six.

The trio were filming a scene in which Morrow’s character was transported back to Vietnam to protect the two children, but disaster struck when a helicopter flying above them was sent plummeting to the ground by a badly-timed explosion during a chase scene.

The tail-rotor was blown off by the explosion which sent the low-flying helicopter spinning wildly, decapitating Morrow and Le as it fell to the ground, and crushing Chen while it skidded to a halt.

The incident and resulting 10-year legal case resulted in a change in safety regulations going forward after it was determined that the explosion had been too close to the helicopter.

During filming for the seventh episode of TV series Cover Up, Jon-Erik Hexum was fatally shot with a blank from a gun.

He was playing an undercover CIA agent who was posing as a male model and was given a gun loaded with blanks.

However, the day of filming had been subjected to many delays and Hexum began playing around with the gun during his downtime between takes, simulating a game of Russian roulette.

Hexum had unloaded all but one of the blanks from the chamber and had been spinning the cylinder around before re-engaging it, and put the gun up to his head.

He had been unaware of the danger, as blanks use paper or wadding to seal gunpowder inside a cartridge, meaning huge pressure is built up which can send lethal fragments out of the barrel.

Paper wadding had shot out of the barrel and shattered his skull, causing massive haemorrhaging in his brain.

He had been rushed to hospital and underwent emergency surgery but died five days later from his injuries.

2014 – Camerawoman hit by train on set of Midnight Rider

A CSX freight train had hit the crewmembers during a camera test, with CSX claiming permission had not been granted for them to be filming on the trestle bridge.

Joi ‘SJ’ Harris lost her life in a freak low-speed accident in 2017 while filming for Deadpool 2, after the experienced rider lost control of her bike.

She had been filming a stunt sequence at Shaw Tower in Vancouver, when she crashed into a plate glass window.

Harris had not been wearing a helmet at the time as the character she was portraying, Domino, played by Zazie Beetz, didn’t wear one in the scene.

She had been rehearsing stunt scene that involved driving a motorcycle out of the open doors of a building, across a concrete pad and down a ramp that had been built over three stairs and coming to a stop on the stair landing.

However, during the initial shooting of the scene, she had continued driving beyond the planned stopping spot on the stairway landing and continued down a second ramp which was built over the bottom stairs and across the road, striking a concrete curb which caused her to be thrown off the motorbike and hit the plate glass window of a building resulting in her death.

2018 – FDNY firefighter killed by fire on set of Motherless Brooklyn

Fireman Michael Davidson was killed during the filming of Motherless Brooklyn in 2018 after being called when a fire broke out on set.

The fire had begun in the basement of a building while the film crew was inside on the ground floor, filming a scene set in the 1950s.

Davidson was reportedly the first fireman to go into the building and suffered serious injuries after being separated from his crew, being found unconscious and despite efforts to revive him, tragically died.

2012 – Stuntman killed in explosion on The Expendables 2 set

Stuntman Ken Liu was killed while taking part in a stunt on the water in Bulgaria when an explosion scene went wrong.

The 26-year-old died of injuries sustained resulting from a nearby explosion while he filmed scenes on an inflatable boat.

John Jordan, an aerial photographer for the film Catch-22, died when he fell out of a plane being used for aerial shots.

He had been known for his fearless photo-taking, including leaning out of helicopters while wearing a harness to get the perfect shot.

On the set of Catch-22, he had reportedly refused to wear a harness while filming in the B-52 Bomber over the Gulf of Mexico, and ended up falling out when a sudden gust of wind caused the plane to tilt sideways, ending up with him plunging 4,000 feet to his death in the sea.

Crew member Ricardo Cornelius lost his life on set when an unsecured car slid off a rotating platform and crashed into him.

He had been assisting with a US army issue Hummer, which was parked on a rotating platform, when it tilted and fell, pinning him to a wall, crushing his chest.

He had been rushed to hospital where doctors tried to save him, but succumbed to his injuries.

H.B. Halicki was killed while directing Gone in 60 Seconds when a water tower, which had been planned to fall during a scene, dropped unexpectedly when a supporting cable snapped.

He was killed instantly in the accident and production was halted, never making it to completion.

Stuntman Conway Wickliffe was killed during rehearsals for a scene in which he had to lean out of the Batmobile, when the driver crashed into a tree at 20mph.

The driver manager to escape unscathed but Wickliffe died at the scene after suffering a catastrophic head injury.

Art Scholl, a renowned stunt pilot, died during the filming of Top Gun when he entered a spin manoeuvre in his plane, but was unable to maintain altitude.

The aircraft crashed into the sea and was never recovered, meaning investigators still do not know what went wrong to cause the tragic incident.