There's great joy in seeing experts in their element, thriving, like Serena Williams serving a ball with precision and force, Harry Styles going wild on stage, or Heidi Klum on Halloween.

Yes, Klum is a supermodel and a veteran TV host. And she's really, really good at those things. But one of her crowning achievements has been being adoringly named "Queen of Halloween" by the public. Her transformations are often jaw-dropping: She becomes unrecognizable. The sheer amount of time it takes to pull the costume off is applause-worthy. Each year, there are roundups upon roundups of her incredible Halloween executions.

Of course, Klum doesn't just slap on a costume and some paint and call it a day. She's partnered with one of the most heralded special-effects makeup designers in the business, Mike Marino, to bring her wildest costume ideas to life. Marino, lead designer and owner of Prosthetic Renaissance, has worked with Klum since 2011. He has plenty of tricks up his sleeve, not limited to Halloween costumes: he was behind Natalie Portman's aerian transformation in Black Swan, John Travolta's metamorphosis into John Gotti, took Mahershala Ali through three decades of life in True Detective Season 3, and has worked with The Weeknd to make him look like he endured extensive plastic surgery to become The Nutty Professor for Halloween.

"Heidi would do anything for Halloween," says Marino. "She loves makeup and she's open to doing any type of Halloween costume, as long as it's cool and fun." A few months before Halloween, Marino starts working with Klum on an idea for a costume, and then Prosthetic Renaissance designs it after lifecasting (creating a copy of her face and/or body using silicone and plaster molds) and taking measurements, and whatever design comes out is the final form: there are no iterations or revisions done on the costumes.

We spoke with Marino about working with Klum on some of her most dramatic transformations ahead of Halloween and what the process entails.

Marino, keeping his cards close, says all of the costumes are expensive and take a lot of time, presenting different challenges. All of that work is essentially destroyed at the end of the night — the appliances for the costumes are traditionally single-use and cannot be salvaged after removal. "The removal process involves a lot of very tired makeup artists taking her makeup off at 5 a.m. It takes an hour to remove [because] we are careful to be gentle on Heidi's skin."

Bonus behind-the-scenes detail: While the prosthetic application process takes place, Marino says Klum loves to listen to loud music. "Everybody has fun, drinks champagne, and eats french fries. It's a lot of work, but it's always a good time," he says. 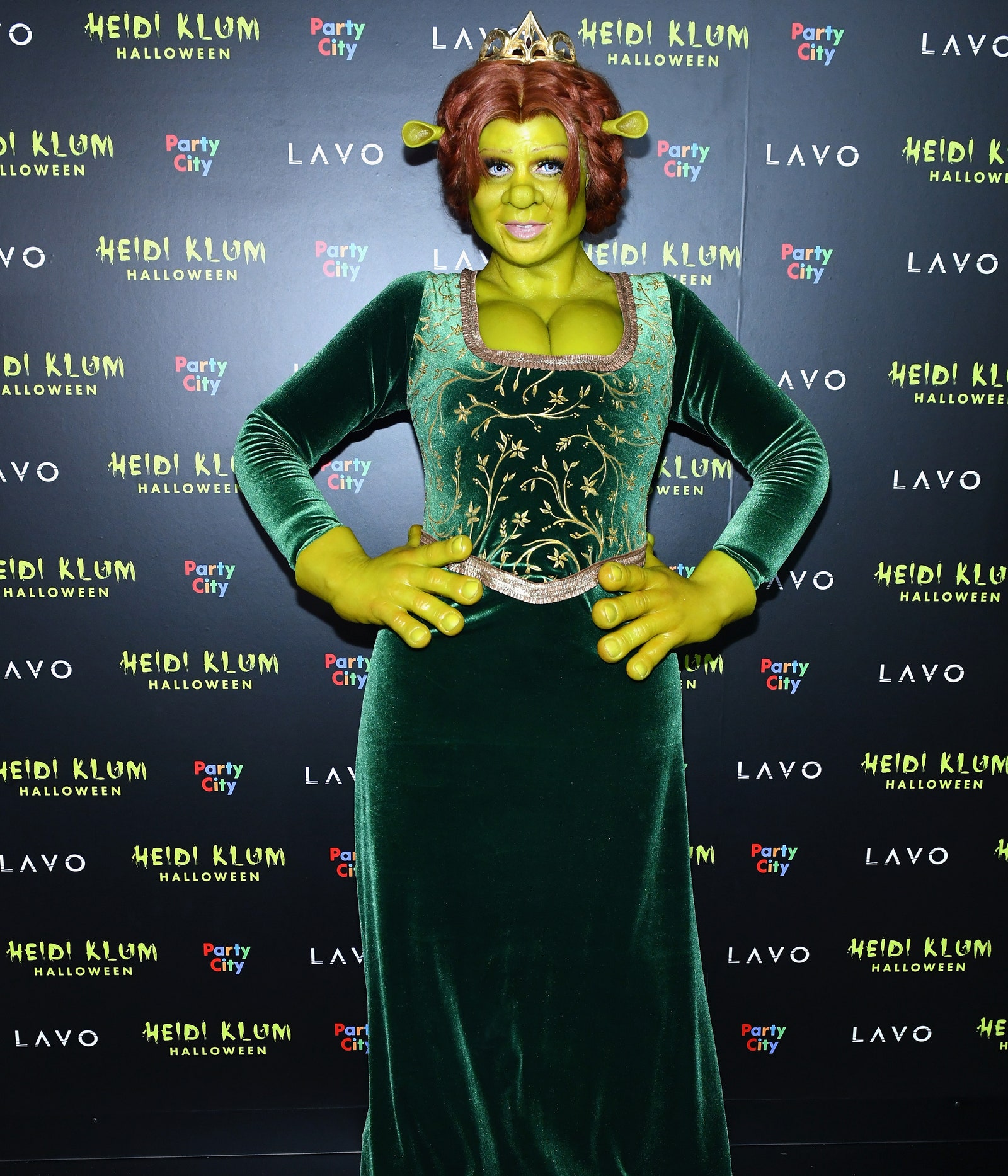 In 2018, Klum arrived at her annual Halloween party as Fiona from Shrek, with husband Tom Kaulitz in tow as the green ogre himself. Considering the movie premiered 17 years prior, we asked Marino why the costume came to life when it did.

"She could never find a willing partner to do it with her until [Tom]. He was totally cool with doing the makeup, so she finally found her ultimate partner," said Marino.

The costume included two pounds of hair — equivalent to the weight of a quart of milk — along with large green appliances to be worn on her hands, feet, and even an enlarged cleavage, which Marino noted was uncomfortable to wear. Both Klum and Kaulitz's costumes were 15 to 20 pounds each, and it took his team around eight hours to apply day-of. 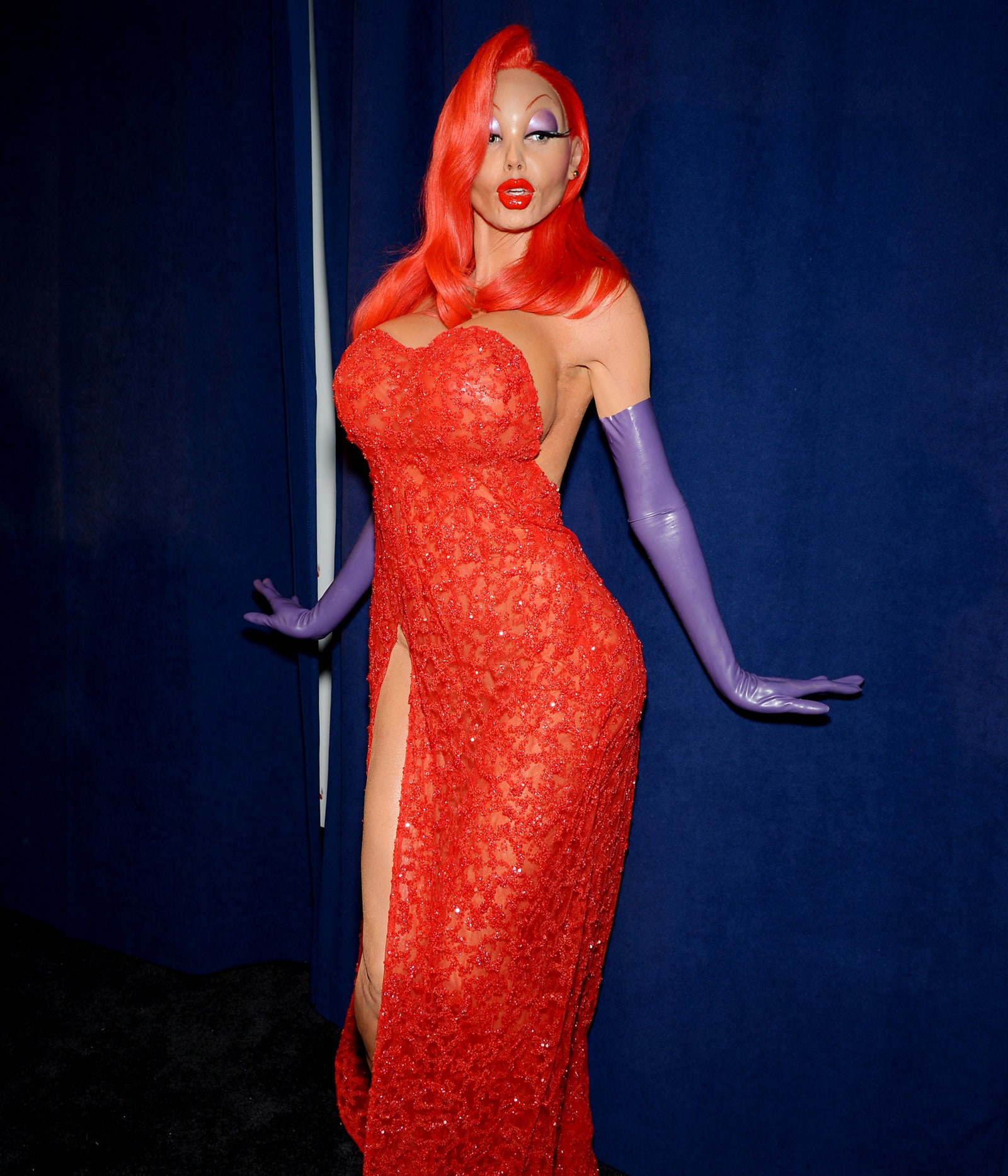 Of all the costumes he created for Klum, Marino says the red-headed vixen from Who Framed Roger Rabbit was his favorite to pull off because of how experimental it was. It's hard to see this costume and not notice her exaggerated bosom and derriere. Marino specifically sculpted these appliances himself to create the animated look.

"I sculpted it to look like the cartoon as much as possible, [pushing] it as far as I could to give a caricature effect. The breasts and heavy parts were sculpted to stay up and elevated," he says. Her dress, made by designer Christian Siriano, was essentially glued onto her body, and the process took 10 hours to apply from start to finish. 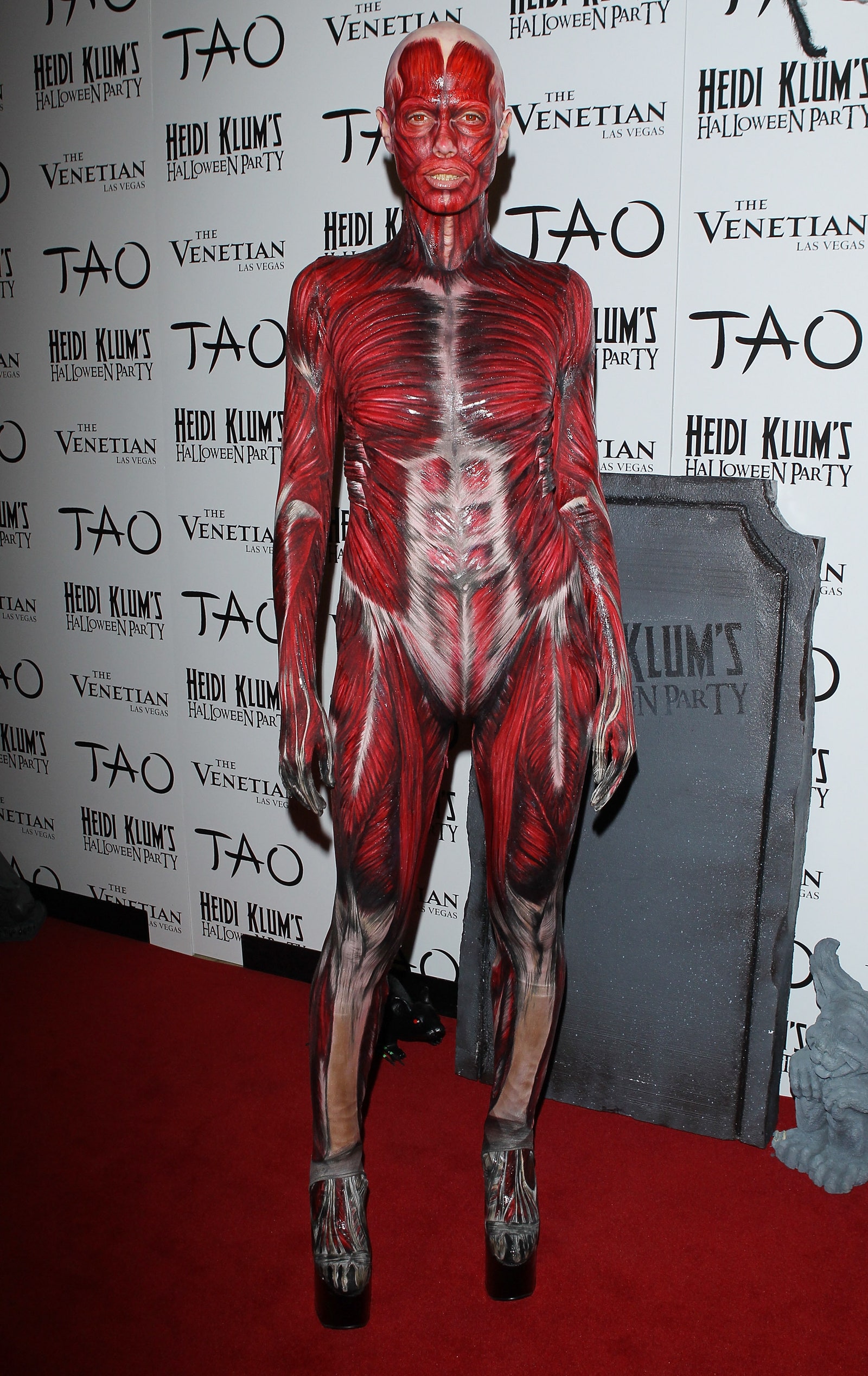 In 2011, Klum arrived at her 12th annual Halloween Party bare bones. Literally. Deemed by Klum as "The Visible Woman," this costume pre-dates Klum's partnership with Marino, but it’s one of our favorites due to the amount of hand-painted detail required. Oscar-winning special-effects makeup artist Bill Corso worked on her makeup while designer Martin Izquierdo made her costume. (Corso actually recommended Marino to Klum when he wasn’t available to work with her.) The way her costume seamlessly blended into her face makeup had us doing a double-take… and wanting a ticket to the Bodies exhibition in Las Vegas. 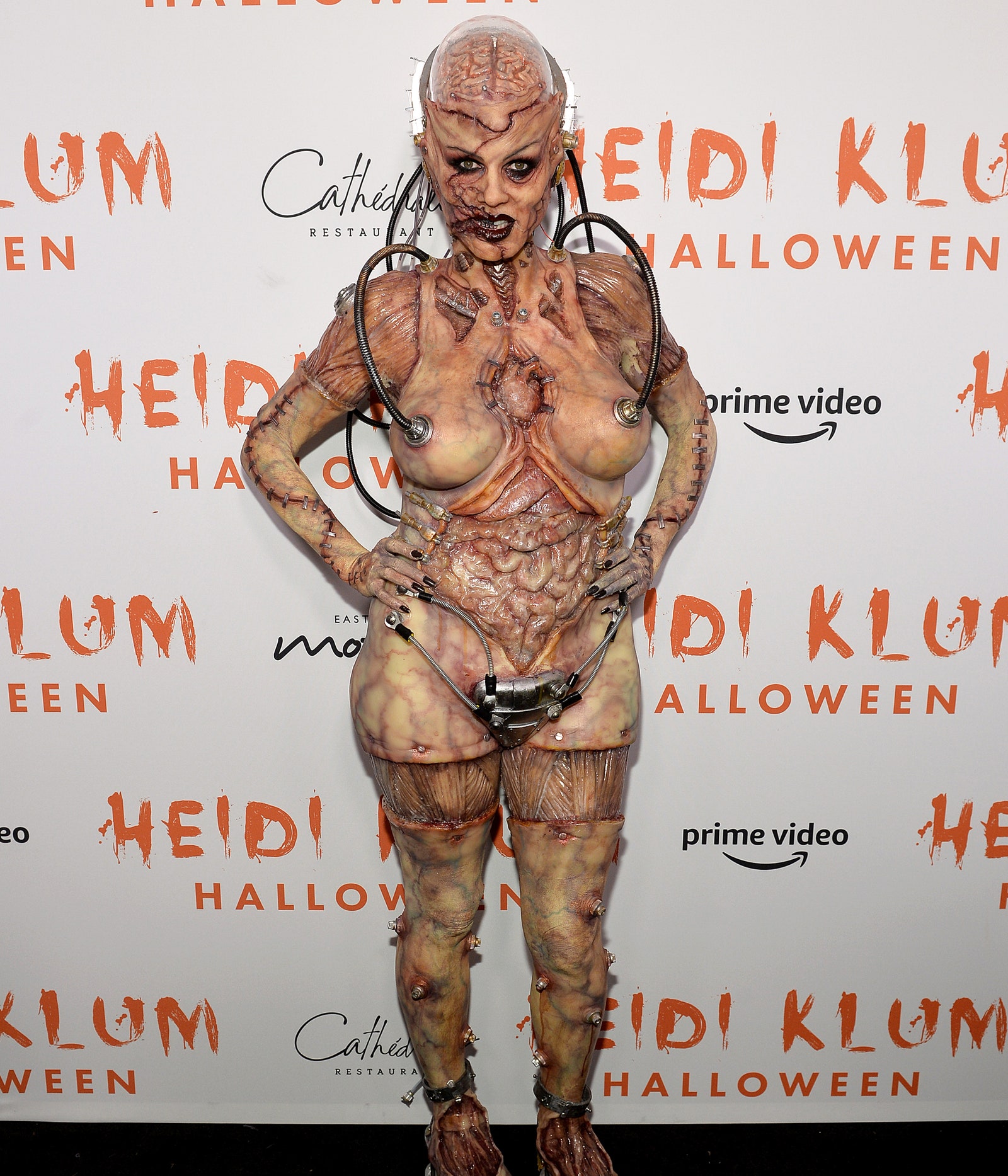 We're not even sure how to describe this costume, which is a reason why it's so great. In 2019, the 20th anniversary of and the last time Klum held her annual Halloween party, the costuming process was displayed for humans who cared to watch at the Amazon store on 34th Street in New York. The process took 10 hours to complete by Marino along with special effects makeup artist Mike Fontaine. The costume itself included steel platform heels, a step-in silicone bodysuit, wires, and a glowing brain. (Cue "out of this world" pun here.)

Klum’s annual party has been on hold for the last two years due to the Coronavirus pandemic, but she's been teasing "#HeidiHalloween2021" for the past week on her Instagram. Showing off gruesome special effects makeup on her back, she captioned a recent boomerang, "Never look back, the past is a wilderness of horrors." In a one-minute video posted on October 24th, the model is shown crawling out of a grave and eating a severed arm while covered in blood. Could #HeidiHalloween this year be a short film? It appears we'll find out soon.