Actor Cory Monteith tragically died of an overdose on July 13, 2013, but at least one person is making sure that he is never forgotten. Monteith’s ex-girlfriend Lea Michele has made it a point to pay tribute to her one-time love and former “Glee” co-star every year. The two met on the set of “Glee” in 2009 and dated for a year from 2012 up until the star’s death.

Monteith was 31 years old when he was found dead in a hotel room in Vancouver, Canada. The cause of death was found to be a “mixed drug toxicity” of heroin and alcohol, per People. Prior to his death, Monteith had publicly struggled with substance abuse and undergone a stint in rehab. Explaining that he’d turned to drugs as a way to “finding a place” in life, the late actor told George Stromboulopoulos, “For me it wasn’t so much about the substances, per se. It was more about not fitting in… I hadn’t found myself at all. I had no idea who I was. I had no idea where I was going.”

Despite his personal struggles, Monteith was adamant that he wanted to inspire young people. “If I can inspire kids to do what they love to do, and follow their dreams … that’s the highest calling,” he told Entertainment Tonight. He’s clearly inspired Michele, who commemorates the anniversary of his death every year. 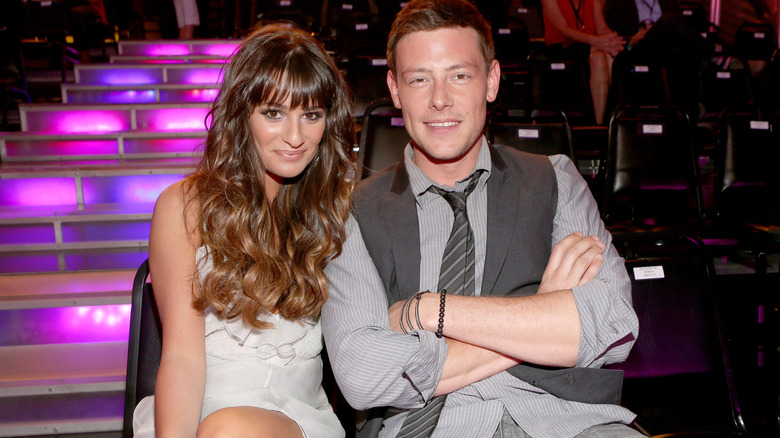 Lea Michele will always love and remember Cory Monteith. She made this clear on July 13, sharing a black-and-white photo of her ex to her Instagram stories (via Us Weekly). In the picture, Monteith appears onstage, wearing his varsity jacket from “Glee,” and waving to a crowd of people. Marking eight years without Monteith, Michele simply added a red heart emoji to her Instagram story. Previously, the “Screams Queens” actor has remembered Monteith through sweet social media shout-outs and even inked him on her skin. According to Entertainment Tonight, Michele has tattoos in Monteith’s honor, including the number “5” (alluding to Monteith’s jersey number on “Glee”), his character’s name, and his last words to her: “if you say so.”

Today, Michele is married to Zandy Reich, and the couple welcomed a baby boy in August 2020. The actor continues to celebrate Monteith, though, even as she’s moved on romantically. “I only have happy memories of Cory. He was not his addiction — unfortunately it won,” she told Seventeen in 2014. “But that wasn’t who he was. Cory made me feel like a queen every day. From the minute he said, ‘I’m your boyfriend,’ I loved every day, and I thank him for being the best boyfriend and making me feel so beautiful.”

If you or anyone you know is struggling with addiction issues, help is available. Visit the Substance Abuse and Mental Health Services Administration website or contact SAMHSA’s National Helpline at 1-800-662-HELP (4357).