As the old saying goes, “Some rules are meant to be broken,” and Queen Elizabeth II did just that following the tragic and untimely death of Princess Diana.

As reported by Mirror UK, it was not long after Diana’s death that the news spread like wildfire. Many immediately took to the gates of Buckingham Palace to pay their respects and create a makeshift memorial for the late princess. As time went on, the bouquets of florals mounted… and so did tensions, unfortunately. But why, exactly? The Britons were not happy about one little detail that Queen Elizabeth had seemingly overlooked — or perhaps, ignored.

Fortunately, the queen heard the people’s cries and made good on their request, even breaking royal protocol in the process. Keep reading after the jump to learn all about the rule Queen Elizabeth broke and a new protocol she set forth following the heartbreaking death of “the People’s Princess.” 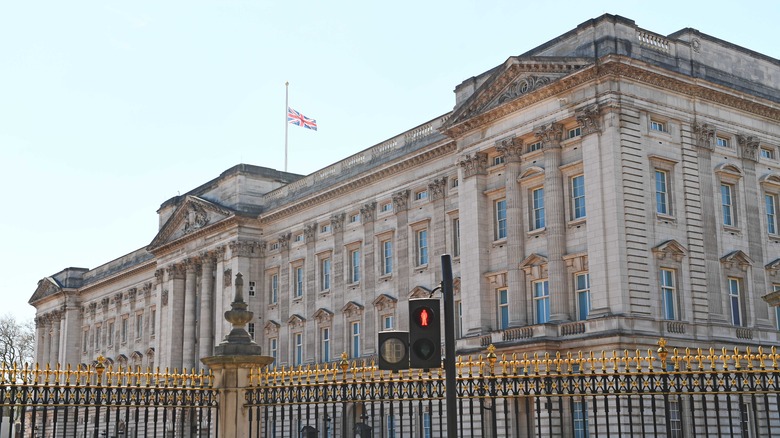 As reported by Mirror UK, during the days after Princess Diana’s death, it became increasingly clear that the public wanted a flag flying at half-mast over Buckingham Palace as a tribute to the late royal.

Unfortunately, according to royal protocol, the Royal Standard flag is only to be flown at the palace if the queen is there. It’s reported that, at the time of Princess Diana’s death, both Prince William and Prince Harry were at Balmoral spending time with the queen. It’s rumored that, after learning of Diana’s death, the queen made the call to stay at Balmoral with the princes as they grieved the death of their mother away from the public eye. Without a doubt, the queen had found herself in quite the predicament.

In the end, however, in a rare and unprecedented move, Queen Elizabeth chose to throw the royal handbook out the window. The queen had spoken: the Union flag would fly over the palace at half-mast on the day of the late princess’ funeral. And on that somber day, the protocol changed forever. It is now customary for the Union flag to fly when Queen Elizabeth II is away, only to be swapped out with the Royal Standard flag when the queen is occupying the palace. The Union flag has also been flown at half-mast several times since Diana’s death to commemorate other mournful occasions, including the death of the Queen Mother.

The times, they are a-changin’…