Supermodel Iman appeared on Naomi Campbell’s YouTube show on April 27 and gave a rare glimpse into her iconic love story with the late David Bowie.

Iman rarely talks about her beloved husband, David Bowie, who she lost to cancer in 2016, but she happily reminisced during an appearance on Naomi Campbell’s YouTube show. During the hour-long video interview Iman revealed that her love affair with the ‘Ziggy Sardust’ singer started with a blind date!

“I just moved to LA, because I just wanted to have a distance,” the founder of Iman Cosmetics shared. “I wanted really to divorce myself from modeling, because you know it is very lucrative, it’s easy to come in and out of it and I just wanted to really have a room to breathe and think, ‘Well, what is my next act, what do I want to do next’.”

“The hairdresser was David’s hairdresser, but David didn’t even know,” the longtime model laughed. “David was told also it was a birthday dinner. And that’s how I met him, that’s how I met him. And it was 29 years ago. It’s literally when people say do you believe in destiny? Yup. Yeah, this could not have happened… I truly in my heart feel it was predestined.” 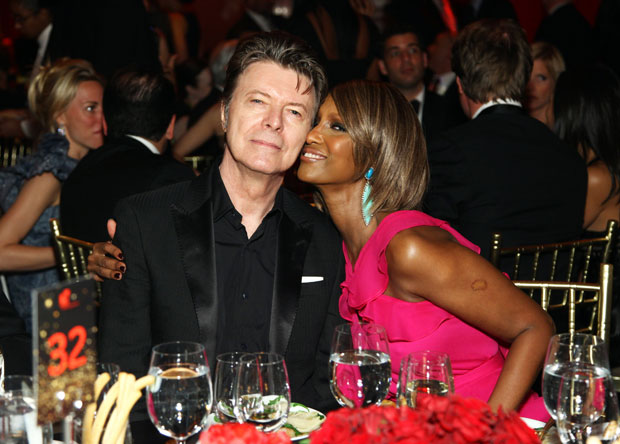 Iman and Bowie married in 1992 and went on the have one child together — a daughter, Alexandria “Lexi” Zahra Jones, 20. David had one son from a pervious marriage, film maker Duncan Jones, 49, whom he shared with his first wife Mary “Angie” Angela Barnett. Iman has a daughter, Zulekha Haywood, 42, who she shares with her first husband, retired NBA star Spencer Haywood.

Imani and Bowie were together until he died at the age of 69, after battling liver cancer. Iman has not remarried since, and it’s clear she still misses him. But the retired model is keeping busy being a grandmother. Her eldest daughter Zulekaha has a 3-year-old daughter, Lavinia, and Iman revealed during her chat with Naomi that she has weekly zoom dates for painting with the tot. So sweet!