John Cleese made a dig at Good Morning Britain’s Piers Morgan after the presenter tweeted about Hugh Grant, who he regularly engages in Twitter spats with. The GMB host told the Four Weddings and a Funeral star to “quit acting then” after The Guardian tweeted the headline: “Hugh Grant: ‘I want to do my bit to prevent a national catastrophe’.”

John used the opportunity to hit out at Piers himself, saying his only talent is “self-promotion”.

The Monty Python star recalled a Twitter exchange from 2015 and said to Piers: “This jibe, from a man whose only talent is self-promotion, remind me of an exchange some years ago…

“PM: When are you going to be funny again, Cleese? It’s been a long time.”

“JC: When are you going to be talented ? It’s been a lifetime.” 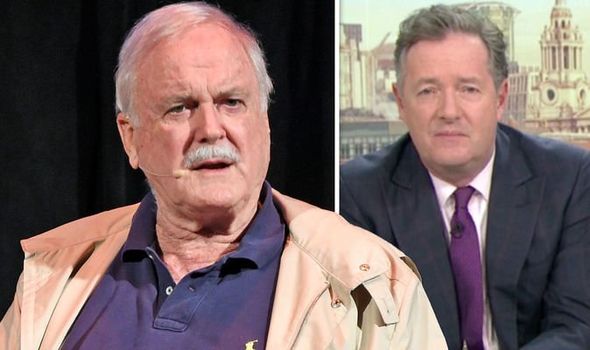 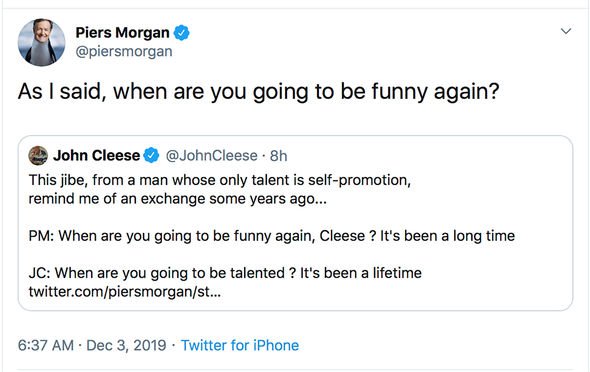 Piers replied with a dig of his own, writing: “As I said, when are you going to be funny again?”

Those who saw the spat commented on who they believed had the better insult, with one person writing: “Cleese 1 – 0 Morgan.”

Another said: “Like you both for different reasons. This round definitely belongs to Cleese. #micdrop.”

A third didn’t want to take sides as they commented: “John Cleese is a legend and a treasure. Piers you’ve earned my respect as well. So, at least one person on this earth loves you both. As you were.” 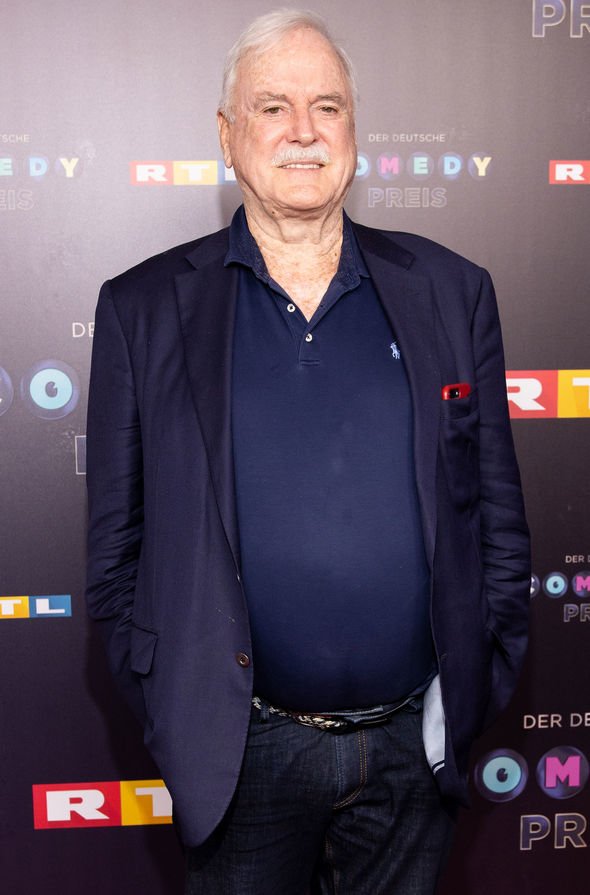 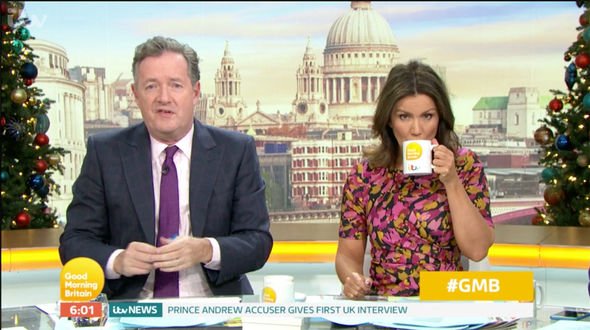 John and Piers have a history of unkind exchanges and two years ago, the comedian called the ITV favourite a “creep”.

“I always thought he was an awful creep,” John told Radio Times.

The actor also recalled an awkward encounter with Piers, saying: “I pretended that I hadn’t seen him in a restaurant but it didn’t work. He then asked me when I was going to be funny again.

“I just didn’t want to have an encounter with him and since then he’s been after me and I’ve been after him.”

Meanwhile, on Good Morning Britain today, Piers had someone else in his line of fire.

The host grilled Alastair Campbell on the programme, alongside Susanna Reid, as conversation soon turned to Brexit.

Addressing his views, Tony Blair’s former press secretary argued: “One of the awful things about the election – the Brexit deal and what follows actually hasn’t been debated, because [Boris] Johnson just does a slogan and [Jeremy] Corbyn doesn’t want to talk about it at all!”

Piers said back: “Johnson’s slogan is to honour the result -“ and Campbell interjected: “Is to get Brexit done!”

“Yes I do,” Campbell remarked.

Piers continued: “You want to defy the way this country voted,” to which Alastair hit back: “No! Well, we’re a democracy.”

The political aide said: “I don’t want this country to take what I think is a terrible step.”

Good Morning Britain airs weekdays on ITV from 6am.