Kanye West looked somber as he sat court side at the NBA game on the same day he posted the sweet throwback of him and ex Kim Kardashian.

Kanye West, 44, appeared to look sad while attending an LA Lakers and Sacramento Kings game at Staples Center. The Yeezy rapper was sitting on the floor for the NBA game on Friday, Nov. 27,  but seemed to have other things on his mind: likely Kim Kardashian, 41. Kanye’s outfit appeared to match his mood, as he opted to go with an all black leather outfit including an oversized leather jacket, snow pants, boots and a baseball cap. 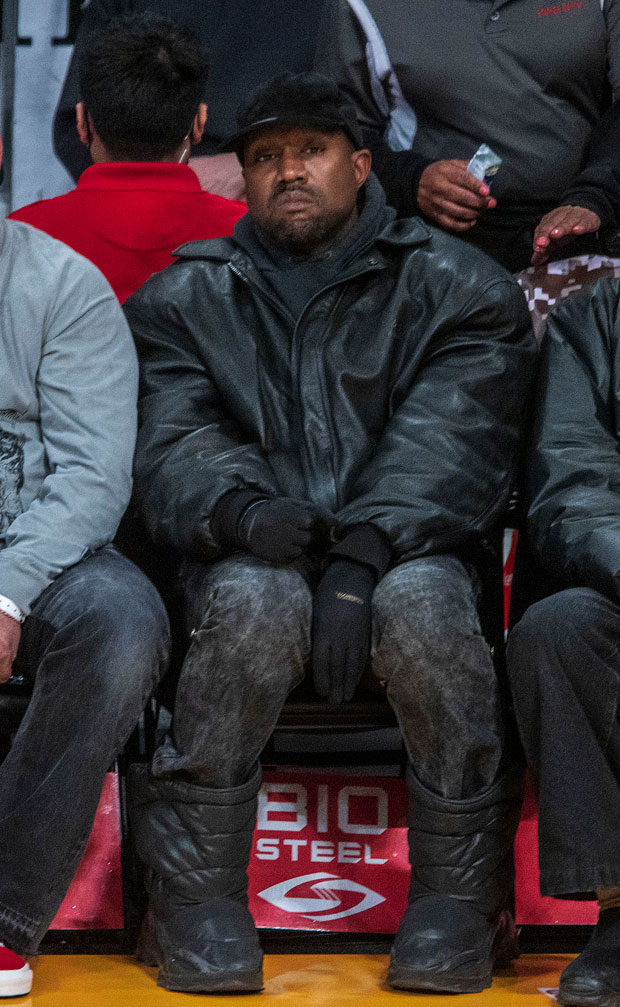 The outing came just after he posted a throwback kiss photo of he and Kim, which was originally shared in 2019 by the SKIMS founder. The two only had eyes for each other in the black-and-white snap as they stopped for the moment by some scenic desert rocks. Kanye’s photo post was attached to a recent headline about his pre-Thanksgiving speech at Skid Row where he said that he believes God will bring him back together with Kim, who filed for divorce in Feb. 2021.

“I’m trying to express this in the most sane way, the most calm way possible, but I need to be back home…we’ve made mistakes. I’ve made mistakes,” Kanye said on Wednesday, Nov. 24. “I’ve publicly done things that were not acceptable as a husband, but right now today, for whatever reason — I didn’t know I was going to be in front of this mic — but I’m here to change the narrative,” he added.

Ye’s was made alongside the CEO of the LA Mission, which is focused on fighting homelessness in Los Angeles. Kanye was set to meet with him to discuss ideas to help improve the situation in Los Angeles.

In recent weeks, Kim — who married Kanye in 2014 — has publicly been dating Pete Davidson, 28. The pair worked together on her Oct. 9 Saturday Night Live debut, which included an on-screen kiss between the pair. Kim and Pete have since been on multiple dates, and spotted holding hands in Palm Springs and at LA hotspot Giorgio Baldi.

“I have to be next to my children as much as possible. So, when I’m out the house,” Kanye also said, referencing his kids  North, 8, Saint, 5, Chicago, 3, and Psalm, 2. “I’ve got a house right next to the house. I’m doing everything to be right next to the situation. I’m not letting E! write the narrative of my family. I’m not letting Hulu write the narrative of my family … I am the priest of my home,” he concluded.