GWANGJU, South Korea — Katie Ledecky won her first gold medal in her final event of an illness-plagued world swimming championships, rallying on the last lap to claim the 800-meter freestyle on Saturday.

Ledecky turned on the jets and completed the last lap in 29.19 seconds to Quadarella’s 30.76.

Ariarne Titmus of Australia earned bronze in 8:15.70. Titmus stunned Ledecky to win the 400 free on the first night before Ledecky got sick and withdrew from the 200 free preliminaries and the 1,500 final.

Caeleb Dressel, an American, won three gold medals in a span of about two hours Saturday night, duplicating his achievement from two years ago in Budapest, Hungary.

Dressel has six golds and seven medals over all with one night remaining in the meet. He tied Michael Phelps’s record of seven medals — all gold — at a single worlds in 2017. 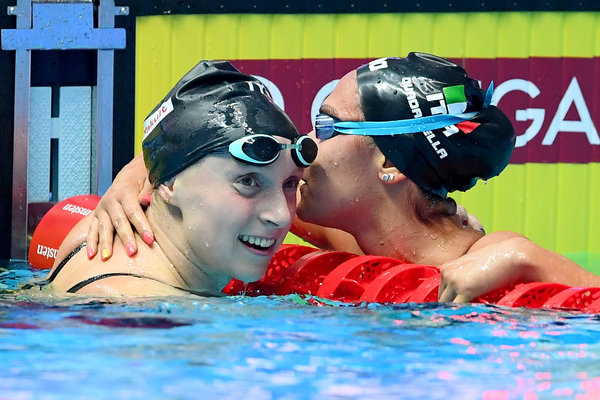 Dressel completed a 50-100 free sweep by winning the 50 in 21.04 seconds, bettering the championship record of 21.08 set by Brazil’s César Cielo at the 2009 worlds in Rome during the height of the rubber suit era.

Bruno Fratus of Brazil and Kristian Gkolomeev of Greece tied for silver in 21.45.

Coming back just 34 minutes later, Dressel won the 100 fly in 49.66 a night after breaking Phelps’s world record in the semifinals.

On trips to the podium, Dressel tied a bandanna belonging to a high school mentor who died onto the ribbon of his medal and stood with his right hand over his heart for the United States anthem.

She set the world record of 2:03.55 in Friday’s semifinals and was on a pace to lower it again before fading on the last lap. Smith still finished a whopping 2.57 seconds ahead of Kaylee McKeown of Australia.