It’s the little things. Kelly Ripa and Mark Consuelos celebrated their 25-year wedding anniversary on Saturday and made fans swoon with their romantic posts. The 50-year-old daytime talk show host shared that she got the “best gift ever” from her husband.

In a series of Instagram Story photos, Ripa wishes the 50-year-old Riverdale actor a happy anniversary. She then shows off a book filled with photos of their lives together and the births of their three kids — 23-year-old Michael, 19-year-old Lola and 18-year-old Joaquin.

In one IG Story, Ripa shows her husband’s romantic note, which reads, “If I were to write a book of our story, these are the 25 places that could have their own chapter. All of these places mean so much to me – and hopefully to you too.” 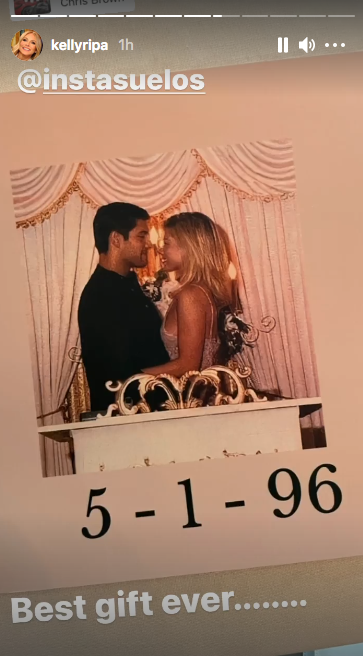 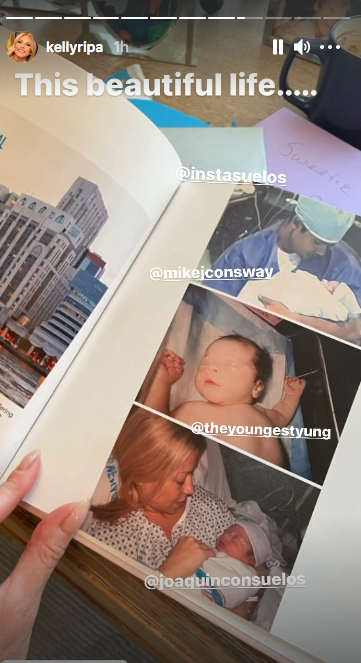 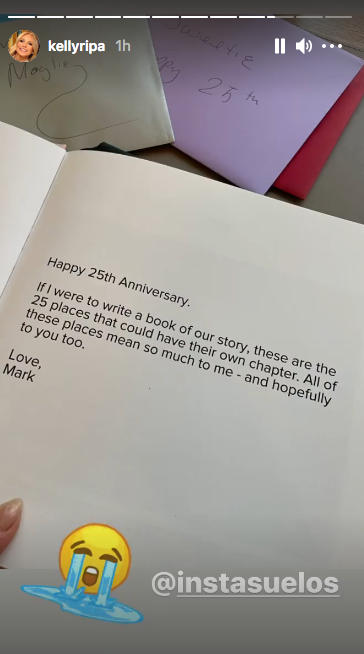 Consuelos also posted a video collage, filled with photos of the two over the years. The clip is set to Steve Wonder’s “As.”

“@kellyripa …”I’ll be loving you until the rainbow burns the stars out in the sky…always”. Happy 25th,” the actor wrote, to which Ripa replied, “Sobbing. I love you so very much. Some of these pics are never before seen. As in, I’ve never seen them before ♥️♥️♥️😂😂😂.”

Ripa and Consuelos met in 1995 when they co-starred together on the popular soap opera All My Children, and eloped in Las Vegas on May 1, 1996. Ripa previously revealed they actually briefly broke up before tying the knot.

“We broke up and we got back together the day before we went off and eloped,” she said during the debut episode of Betches’ Comments by Celebs podcast in 2018. “Yeah, we eloped. We went to Vegas and got married.”

The two recently spoke about their “almost old-fashioned marriage” during their appearance on the Double Date podcast.

“I’ve been able to raise my kids here in this city, in the nest, and he’s always been willing to travel and go to a set and go off here and sometimes he’s had to go live in another country to work on a set over there,” Ripa explained. “What’s funny is I think of us as such a progressive as a couple. I always think of us as politically progressive. Yet, when it comes to our own family and our marriage and our roles, I think of us as very traditional and almost old-fashioned in our roles.”

For more on the couple, see below.