If Kim Kardashian’s pained reaction and loud f-bomb are any indications, La La Anthony can forget a career as a professional ear piercer.

La La Anthony’s journey in the world of professional body modification began and ended on Tuesday (Mar. 23.) In a video posted to her Instagram, La La, 39, is seen with her hands wrapped around the lobe of her client, Kim Kardashian. “LaLa’s re-piercing my ear,” Kim, 40, said to the camera before her eyes go wide. From there, Kim let out a few painful shouts (“Ow! Ow!”) while La La seemed shocked at what she’s done. Clearly, neither Kim nor La La realized that “piercing” would actually involve…piercing the skin.

“Oh my god. Oh my god. She just f-cking re-pierced my ear,” said a shocked Kim. It’s unclear what Kim expected was going to happen, but La La – despite that initial reaction – seemed proud of her handiwork. She even advertised her services in the IG Video’s caption. “If anyone needs their ears pierced…COME SEE ME. my work is nice…quick & to the point…just ask @kimkardashian.” Though, here’s hoping La La uses some professional equipment – and some gloves – for her next client. “New job Alert,” said DJ Clue, one of the many commenters leaving fire emojis and laughing faces in the commenters.

This piercing video appears to be a behind-the-scenes of the recent photoshoot for her SKIMS Soft Lounge and Sleep collection. The slumber-party-themed shoot included Kim, Kourtney Kardashian, Khloe Kardashian, celebrity hairstylist Jen Atkins, La La, and more. La La also shared another candid video taken from the shoot to her Instagram Story. In the clip, Kim and La La are getting ready for the shoot at the makeup station. 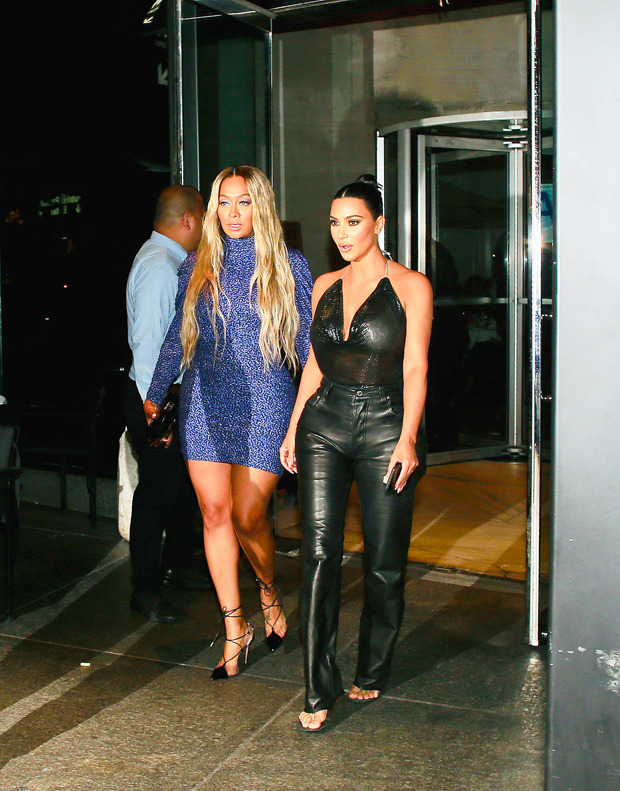 “Guess where we’re at,” says Kim, while La La begins to pose. Unfortunately, there’s a bit of a wardrobe malfunction, prompting Kim to tell her friend that her “whole boob’s out.” Thanks to some clever editing with a cry-laughing emoji, La La kept it SFW. “OMG I’M CRYING @KIMKARDASHIAN. That’s what I get for trying to be cute!”

Kim has recently lived out her full girls’ night/slumber party fantasy, in more ways than one. The SKIMS shoot was clearly inspired by those childhood sleepovers, of piercing ears and watching movies. Kim also recently had all her friends over for a girls’ game night. In the videos posted to her Instagram Story, Kim gets quite competitive with the game. It should also be noted that one of the women invited was none other than Adrienne Bailon, the ex-girlfriend of one Rob Kardashian. Also? The “girls game night” was held on Rob’s birthday. Which is more awkward – having a party with your bro’s ex or having your BFF pierce your ear with her bare hands?