Fans gushed about Kourtney Kardashian and Travis Barker’s interaction in an unearthed clip of ‘KUWTK.’ One fan couldn’t get over ‘the way they looked at each other!’ Check it out!

Kourtney Kardashian and Travis Barker definitely have chemistry, and fans had the chance to see where it all started in old footage from Keeping Up With The Kardashians! In a clip that fans resurfaced on Instagram, the Poosh founder, 42, and drummer, 45, got together with friends like Larsa Pippen, Kourt’s sister Kim Kardashian, and their youngsters to decorate gingerbread houses just in time for Christmas. It was clear that the footage was a few years old, considering that sweet little Reign Disick, Kourt’s youngest child with ex Scott, had long hair! The clip was from an episode from season 14 in 2017.

At one point, Kourt wandered over into the kitchen where Travis was munching on some holiday treats. “Do you want to make a house? A gingerbread house?” Kourt asked Travis while he had some food in his mouth. The drummer nodded with great enthusiasm, and Kourt couldn’t help but giggle. Fans were all about the adorable interaction, and took to the comment section to gush about the two, who took their relationship public in February 2021. 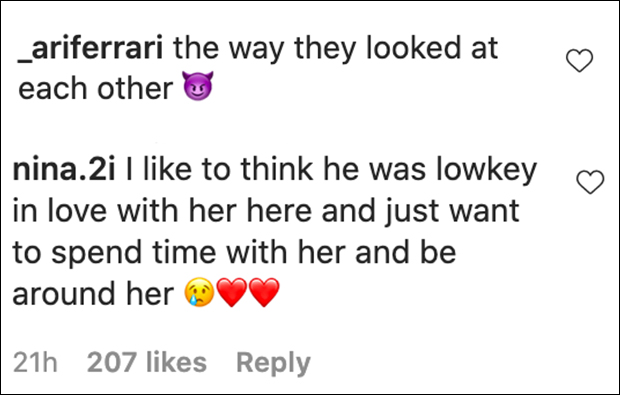 “The way they looked at each other,” one fan wrote, adding a smiling devil emoji. “I like to think he was lowkey [SIC] in love with her here and just want to spend time with her and be around her,” another fan of the couple typed into the comment section. “I love these two together so so much,” one admirer wrote.

Travis and Kourt go way back, and have actually been friends for years! But it wasn’t until this past year that the two decided to take their relationship to the next level. Rumors first started circulating that the two were an item at the beginning of 2021. By February, around Valentine’s Day, the two confirmed the romance by sharing a sweet photo of their intertwined hands.

Ever since then, the couple has been on Cloud Nine! It’s safe to say that Kourt and Travis are absolutely crazy about one another, and their relationship is flourishing. But it’s so fun to see that the strong bond they have now started with their friendship from years ago.