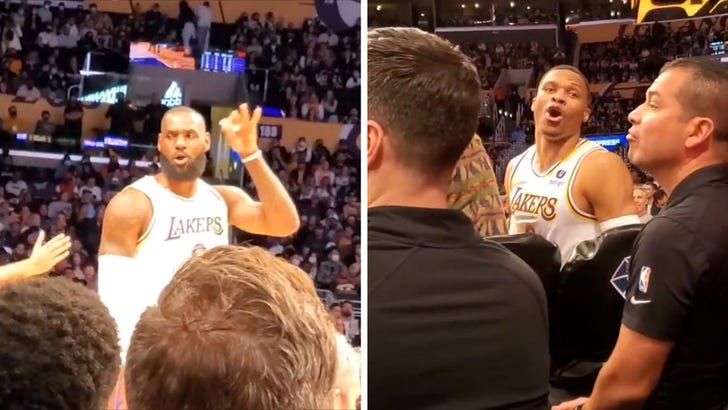 If you thought things couldn’t get worse for the Los Angeles Lakers, here’s proof they’re still approaching rock bottom … ’cause LeBron James is now firing back at fans for criticizing him mid-game — appearing to tell them to “shut your ass up.”

Bron and the Lakers were getting trounced by the Pelicans all Sunday night … and Laker Nation was audibly disgusted by what they were seeing — showering the team with boos throughout the game.

James took exception to one particular fan who apparently had some “advice” for the King … prompting him to clap back as the game was still going on.

“Tell me one thing you know about basketball besides the ball going in,” LeBron fired back at the guy … much to the delight of the crowd nearby.

The video doesn’t show how the fan reacted … but LeBron went about the rest of his night, finishing with 32 points.

James’ relationship with fans has been rocky recently — remember, he had 2 Pacers fans escorted out for heckling him earlier this season.

But, LeBron wasn’t the only Laker to respond to the fans trash-talking him on Sunday — another fan captured a video of forward Trevor Ariza calling someone in the crowd a “bitch” repeatedly.

It appears the guy Ariza had been going back and forth with was ultimately kicked out of the game … getting walked out by security shortly after the interaction.

Tension and frustration were understandably high — the Lakers have looked lifeless coming out of the All-Star break … dropping their first two games to the Clippers and Pels.

Even Lakers GM Jeanie Buss needed a break from watching her team … as video circulated on social media of her leaving her seat as the team was down big, 78-53.

If things don’t turn around quickly, there could be more player vs. fan showdowns to come.