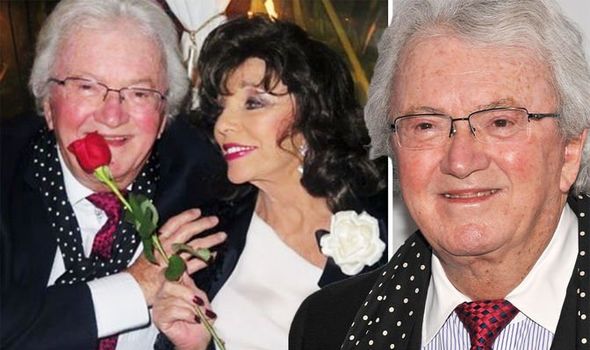 Dame Joan Collins has led tributes to Willy Wonker songwriter Leslie Bricusse, who has died aged 90. The composer was best known for writing the music and lyrics for films such as; Doctor Dolittle, Goodbye, Mr. Chips, Scrooge, Willy Wonka & the Chocolate Factory, Tom and Jerry: The Movie and James Bond’s Goldfinger.

Taking to her Instagram this evening, the actress penned an emotional message alongside a picture of her and Leslie.

She wrote: “One of the giant songwriters of our time, writer of #candyman #goldfinger amongst so many other hits, and my great friend Leslie Bricusse has sadly died today.

“He and his beautiful Evie have been in my life for over 50 years.

David Walliams took to Twitter to pay tribute this evening.

He wrote: “Apart from being a genius songwriter, Leslie Bricusse was the perfect host, the best company, the greatest storyteller, the sharpest wit and the kindest man. I

“I loved him dearly. It was an honour to know him.”

Leslie created the musical Stop the World – I Want to Get Off with Anthony Newley in the 1960s.

Their production was later turned into a film.

The duo went on to write the music for The Roar of the Greasepaint – The Smell of the Crowd in 1965 followed by Willy Wonka and the Chocolate Factory.

With composer Cyril Ornadel, he created Pickwick, a musical based on Charles Dickens’ The Pickwick Papers.

In 1967, he received an Academy Award for Best Original Song for Doctor Dolittle’s Talk to the Animals.