Meghan Markle’s children’s book “The Bench” has finally been released, debuting at the top of The New York Times’ Best Seller list. The book reads as a long poem, with illustrations depicting several different scenes between fathers and their sons, which Meghan says were inspired by her husband Prince Harry and their son, Archie. “… Those lived experiences, from my observation, are the things that I infused in this poem,” she told NPR.

One particular “lived experience” drew ire from British tabloids last month when they reported that an illustration depicted a red-headed man in an army uniform, seemingly returning home from war, lifting up his son while the boy’s mother tearfully watches from the window. An op-ed in The Sun laid into Meghan, as Harry’s military days ended long before Archie was born. Another article in The Sun claimed Meghan was implying that Harry was bitter about being stripped of his military titles. Royal author Phil Dampier told the tabloid, “For Harry, who put his life on the line and then founded the highly successful Invictus Games for injured servicemen and women, losing the titles was the bitterest part of ‘Megxit.'”

But now, Meghan has revealed the real inspiration behind this now-infamous illustration. And the sensational tabloids were way off the mark.

Meghan Markle was inspired by a military dad she met 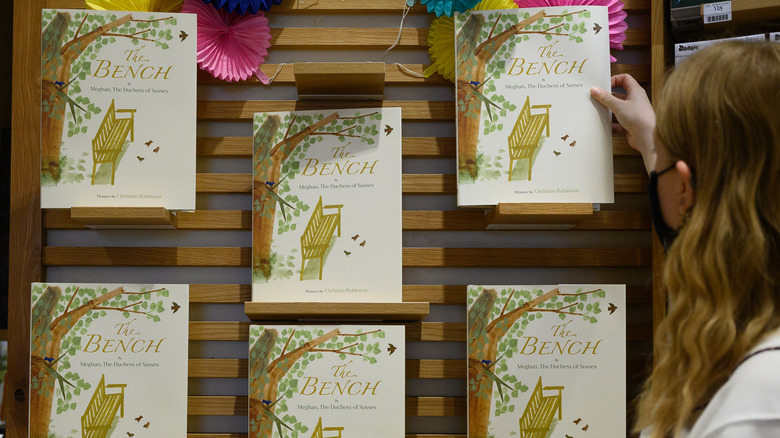 While the military dad depicted in “The Bench” shows a striking resemblance to Prince Harry, Meghan Markle revealed that he was actually inspired by someone else entirely.

In an interview with NPR, Meghan talked about how she wanted to represent all different types of families in her book. “Growing up, I remember so much how it felt to not see yourself represented,” says Meghan. “Any child or any family hopefully can open this book and see themselves in it, whether that means glasses or freckled or a different body shape or a different ethnicity or religion.”

Meghan also said she specifically wanted to include a military family and recounted an encounter she had with a sergeant while she was on a USO tour. “He had told me the story about how he wasn’t able to teach his son how to play catch because he was away,” she said. “And so he and his son would mail this baseball back and forth to each other from Texas to Afghanistan and write the date on it.” She continued, “That page is true to form for him and his family. There are lots of little small moments like that that were personal memories or anecdotes that I wanted infused in there.”