MINNEAPOLIS — The Mets bullpen accomplished something the last two days at Target Field that seemed unlikely as recently as last week.

Not that it took much doing Wednesday afternoon, as the Mets put up 12 runs in the final three innings of a 14-4 rout of the Minnesota Twins. Dominic Smith’s second pinch home run of the season, a three-run shot to right in the seventh, gave the Mets the lead, and after a six-run eighth, the Mets added three more in the ninth with position player Ehire Adrianza on the mound for Minnesota.

Smith’s homer off reliever Trevor May, on an 0-2 pitch, helped him to a career-high four runs batted in, though his teammates kidded him for being the only batter Adrianza struck out.

“My day is ruined,” Smith said with a smile.

Coupled with Tuesday night’s 3-2 thriller, the Wednesday win let the Mets head to San Francisco with their first four-game winning streak since May 23, and with four consecutive victories on the road for the first time since early April.

The bullpen limited the American League Central-leading Twins to one run in eight innings over two days. Two of the Mets’ most beleaguered relievers contributed: Jeurys Familia appeared twice, working one and a third scoreless innings, and on Tuesday night closer Edwin Diaz escaped a bases-loaded jam for his 21st save, getting his former Seattle Mariners teammate Nelson Cruz to foul out on a full count.

“That’s what we’re capable of,” Mets Manager Mickey Callaway said. “It’s very encouraging. Since the All-Star break, it seems to be coming together. That’s how we’re going to win games, that formula.”

Still, the 44-51 Mets have not done nearly enough to jump from being sellers to buyers with the July 31 trade deadline nearing. Their plans, though, may have been complicated by an injury to pitcher Zack Wheeler, widely seen as their best available trade chip.

Earlier this week the Mets placed Wheeler (6-6, 4.69 E.R.A.) on the injured list with what the club said was shoulder fatigue. Speaking with reporters Tuesday afternoon, Wheeler was more specific, calling it a shoulder impingement and adding that he might miss more than one start. That could affect the Mets’ ability to trade Wheeler, since the right-hander most likely will need to pitch before the trade deadline to prove his shoulder is sound. Wheeler is eligible to return July 22 at the earliest. 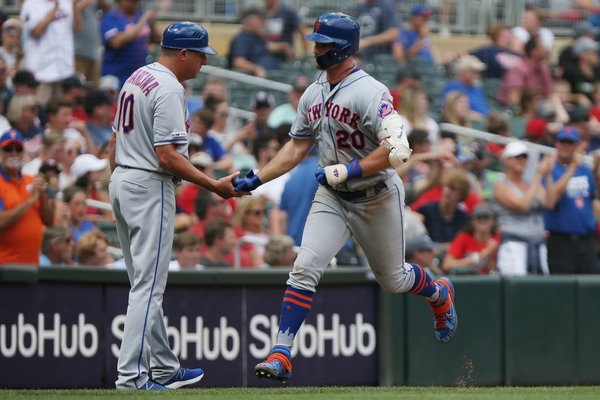 “I don’t really want to set a timetable, because you never know how your body is going to react to it,” Wheeler said. “It could be one start, two, three, I don’t know. I just want to get back as soon as possible and miss only one start.”

Wheeler said he noticed discomfort in a July 2 start against the Yankees when he struck out eight in six and one-third innings. It worsened, he said, five days later in his final start before the All-Star break, an 8-3 loss to the Phillies in which he lasted only five innings and allowed six earned runs. When the shoulder didn’t improve with rest over the All-Star break, Wheeler spoke up.

“I tried to pitch through it, but it got a little too cranky,” he said. “I finally had to say something.” A magnetic resonance imaging exam, he said, showed no structural damage beyond the impingement.

“I don’t think we were totally aware of what he was dealing with, which is good,” Callaway said. “Players play through a lot. He played through it the best he could. Now we’ll take care of it.”

Wheeler has also had to cope with the trade rumors, no matter how much he tried to ignore them.

“Honestly, sometimes you think about it, sometimes you don’t,” Wheeler said. “It could be bad timing, but I’m trying to get back out there as soon as I can. Does it affect whether I pitch sooner or pitch later? I’m just trying to pitch. It’s unfortunate it happened now, I guess.”

The Mets did make one minor deal Wednesday, trading the right-hander Wilmer Font to Toronto for cash considerations. Font, mostly a reliever this season, was designated for assignment July 12.

At the very least, the Mets could take a dose of confidence from two straight wins against one of the A.L.’s top teams. This two-game series was only the second Mets visit to Target Field, but they are 5-0 there, having swept a three-game series in 2013. In addition to the bullpen’s strong performance, two of the Mets’ most important hitters emerged from slumps the last two days.

On Tuesday night Michael Conforto had four singles to break a 6-for-49 slide; one was the game-winning hit to left against a pull shift in the fifth. Conforto went 1 for 5 on Wednesday.

And the rookie Pete Alonso, who was 1 for 17 after winning the All-Star home run derby, blasted his longest home run of the season Wednesday, a 474-foot shot into the third deck in left field, with a man on in the eighth. It was his 31st homer and 54th extra base hit, both Mets rookie records. Alonso said he watched the homer the whole way.

“I still think the one I got the best was the one I hit into the fountain in Atlanta,” Alonso said, referring to an April homer to dead center at SunTrust Park that carried an estimated 454 feet. “But that one felt really good and had really good trajectory. Hopefully I can hit one farther than that.”