Most people probably didn’t have Nicki Minaj praising Tucker Carlson on their 2021 bingo card, but it’s the world we’re living in. On Sept. 13, Minaj faced widespread criticism after tweeting, “They want you to get vaccinated for the Met. if I get vaccinated it won’t for the Met. It’ll be once I feel I’ve done enough research. I’m working on that now.” (The rapper later tweeted that she skipped the Met Gala because she “didn’t want to travel” with her young son.)

While many fans took issue with Minaj’s tweet about the Met Gala and the COVID-19 vaccine, she faced even more criticism (and plenty of jokes) after sharing an anecdote about her cousin’s friend’s supposed vaccine side effects. “Just pray on it & make sure you’re comfortable with ur decision, not bullied,” Minaj tweeted.

That wasn’t the end of Minaj’s vaccine-related tweets, though. On Sept. 15, Minaj tweeted a Fox News clip of Carlson suggesting that what upset people about her tweet was her suggestion to “pray on it” before making a decision about getting vaccinated. “It’s the last part of Nicki Minaj’s tweet that enrages them. The part where she says you should pray on it, make the decision yourself, like a free human being, and, quote, ‘don’t be bullied,'” Carlson said. Minaj retweeted the clip with a bullseye emoji — and fans weren’t amused. But the rapper didn’t stop there. 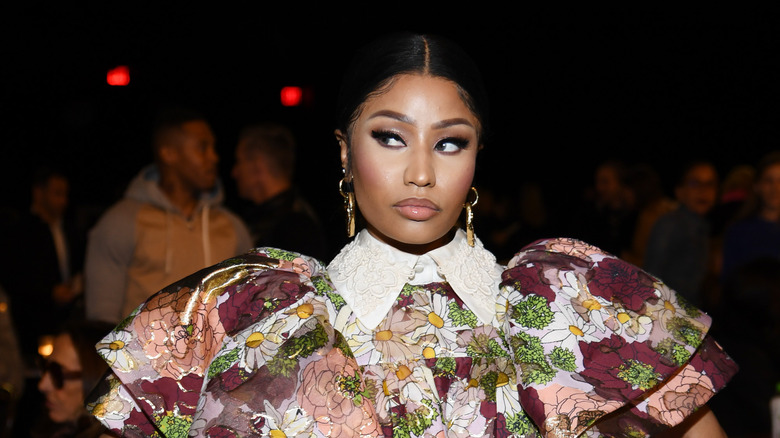 After facing widespread backlash for sharing a Tucker Carlson clip on Twitter, Nicki Minaj doubled down, responding to the criticism of her surprising stance. When Twitch streamer Hasan Piker responded to Minaj’s tweet about Carlson, writing, “you know he’s a white nationalist right?” Minaj claimed that “ppl aren’t human any more.”

“Right. I can’t speak to, agree with, even look at someone from a particular political party. Ppl aren’t human any more. If you’re black & a Democrat tells u to shove marbles up ur a**, you simply have to. If another party tells u to look out for that bus, stand there & get hit,” Minaj quote-tweeted Piker’s message.

Fans responded to Minaj’s tweet, trying to convince her to change her stance (or at least to stop tweeting). “Nicki please put the phone down,” one person wrote. “Nicki, my queen, surely you know ‘white nationalist’ isn’t a political party,” another tweeted. Still, some fans agreed with Minaj’s defense of Tucker, with one writing, “THIS RIGHT HERE is using your platform correctly.”

Minaj later shared another message about the racism of many other prominent figures in U.S. history. “You know how many US Presidents were white supremacists? Oh please. Just stay on topic. Y’all can’t do that. The topic is: asking questions is OK. but let’s make the topic: Nicki talks to white racists so that you can all sleep better tonight. Dummies,” she tweeted. 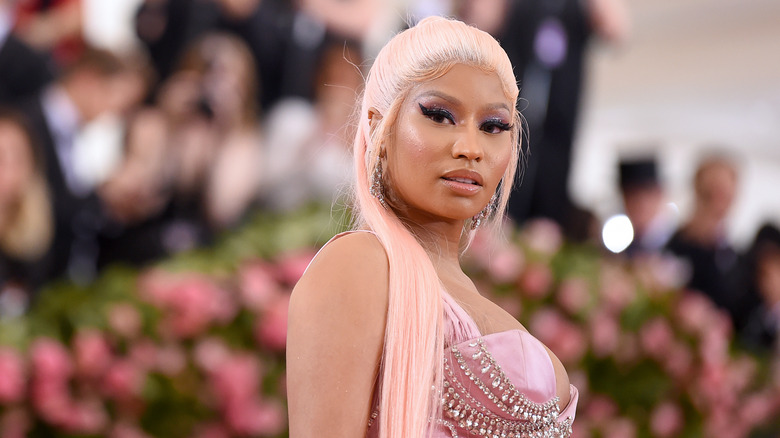 Olivia Rodrigo visited the White House in July to encourage young people to get the COVID-19 vaccine. So it’s not out of the question that Nicki Minaj could visit the White House for a vaccine-related event, too.

After defending her tweet about Tucker Carlson, Minaj tweeted on Sept. 15, “The White House has invited me & I think it’s a step in the right direction. Yes, I’m going. I’ll be dressed in all pink like Legally Blonde so they know I mean business. I’ll ask questions on behalf of the ppl who have been made fun of for simply being human.”

But in a statement provided to the New York Daily News, a White House official explained that Minaj was offered a call with a doctor “to answer questions she has about the safety and effectiveness of the vaccine,” not a visit to the White House. Via NBC News, Dr. Anthony Fauci also said on CNN on Sept. 14 that “there’s no evidence” the COVID-19 vaccine will make men impotent, as Minaj suggested happened to her cousin’s friend.