Rihanna officially has a new beau in her life, but longtime fans of the pop star and business mogul shouldn’t be all that surprised by her latest romantic selection.

According to People, Rihanna is dating rapper and longtime friend A$AP Rocky, following months of romantic speculation surrounding the two stars. The confirmation of the new couple comes after Page Six reported yesterday that the pair were spotted over the weekend at the Beatrice Inn in New York City.

This recent outing, of course, isn’t the first time the two have stepped out publicly together. Over the summer, A$AP Rocky appeared alongside Rihanna for the mogul’s debut campaign of her skincare venture, Fenty Skin. The rapper joined a roster of talent including Lil Nas X and model Paloma Elsesser to launch the gender-neutral line, and even helped Rihanna with a series of campaign videos and interviews promoting the brand.

Rihanna and Rocky’s friendship dates back even further than their recent campaign, however. Back in 2013, Rocky opened for Rihanna as a part of her Diamonds World Tour; he also joined the singer on her 2011 track “Cockiness” from her Talk That Talk album.

Further, Rocky has been a mainstay at events with Rihanna over the years, including at the singer’s glamorous annual Diamond Ball, the 2019 British Fashion Council Awards, and a 2018 Louis Vuitton runway show in Paris. 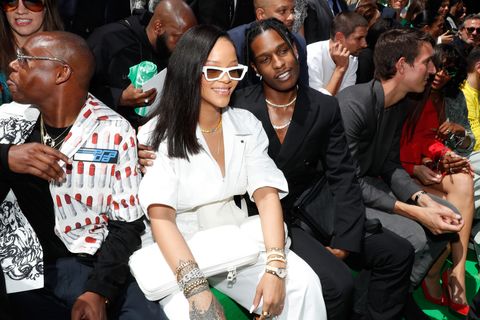 News of the pair going official follows Rihanna’s breakup from Toyota heir Hassan Jameel at the beginning of this year. Rocky has previously been linked to models Daiane Sodré and Kendall Jenner.