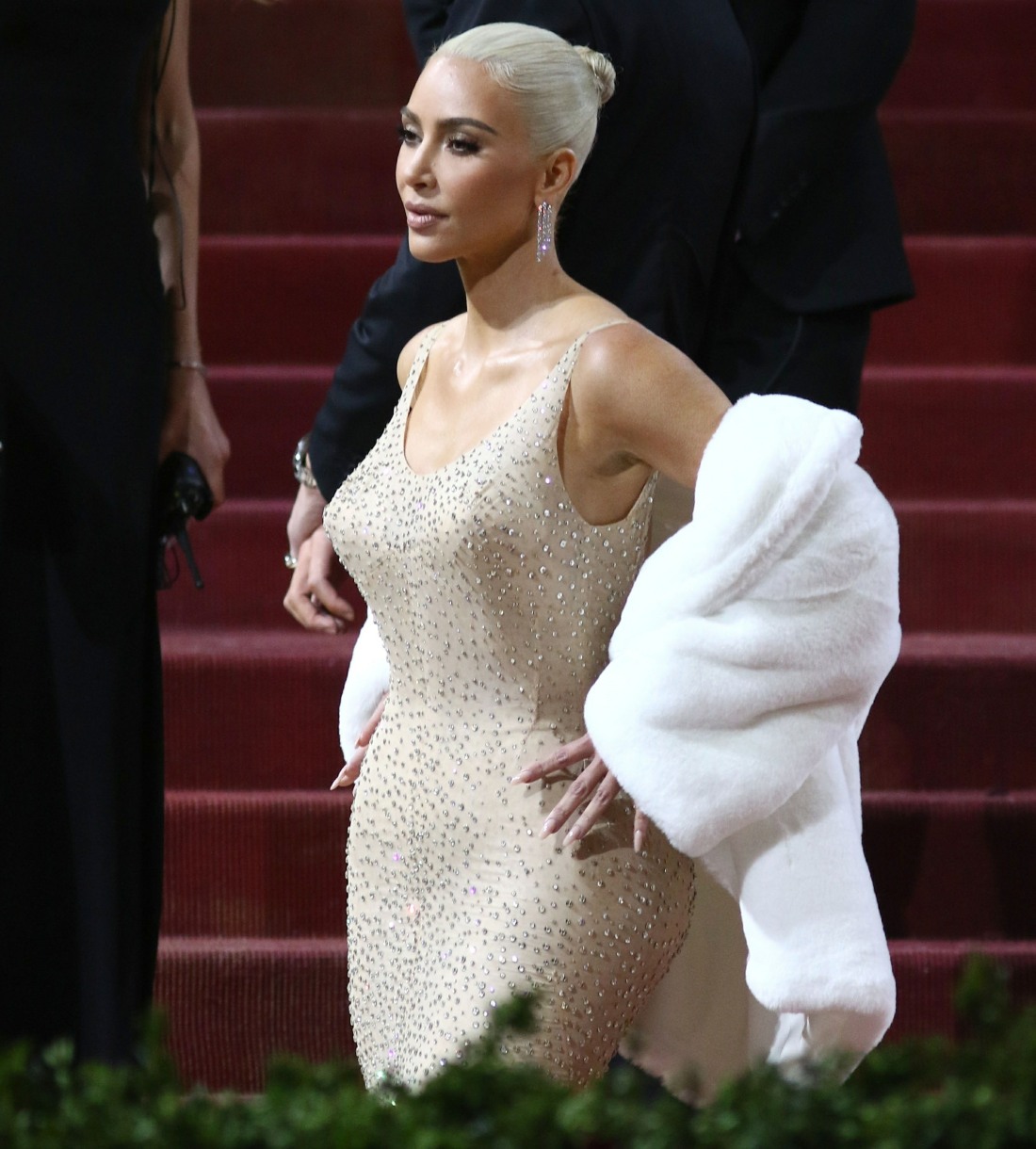 Earlier this week, the Marilyn Monroe collection posted before-and-after photos of Marilyn’s famous Jean Louis dress, the one she wore to sing “Happy Birthday, Mr. President” to JFK. Kim Kardashian borrowed the dress from the Ripley’s Believe It Or Not Museum in Florida. Ripley’s purchased the dress at auction in 2016, and the dress had already been bought and sold a few times before then. Ripley’s lent out the dress to Kim Kardashian for the Met Gala, despite the fact that she couldn’t fit her ass, thighs or boobs in it. Kim reportedly left the dress unzipped for the red carpet, then changed into a replica for the actual gala (once the red carpet was done).

I wondered how the MM Collection even got their hands on the dress to monitor it for damage, considering one would think that Ripley’s has their own in-house restorers/costume-repairers. But the MM Collection did seem to get a look at the dress after Kim wore it and they were beyond pissed at the damage Kim did to it. Several of the crystals were lost/popped off. The fabric was stretched and frayed. The zipper was f–ked. But now Ripley’s claims that actually, it’s fine? Ripley’s posted this press release “debunking” the MM Collection’s claims:

Kim Kardashian’s walk up the Metropolitan Museum’s stairs at this year’s Met Gala caused quite the stir, but one thing Ripley’s Believe It or Not! can say with confidence is that it did not cause damage to Marilyn Monroe’s famed “Happy Birthday” dress from 1962.

Ripley’s Believe It or Not! is not the first owner of this dress. It was acquired at a Julien’s Auctions event in 2016 for $4.8 million. A report written on the dress’s condition in early 2017 states, “a number of the seams are pulled and worn. This is not surprising given how delicate the material is. There is puckering at the back by the hooks and eyes,” among other instances of damage.

Kim Kardashian wearing the “Happy Birthday” dress has been hotly contested, but the fact remains that she did not, in any way, damage the garment in the short amount of time it was worn at the Met Gala.

“From the bottom of the Met steps, where Kim got into the dress, to the top where it was returned, the dress was in the same condition it started in,” noted Ripley’s VP of Publishing and Licensing, Amanda Joiner, who was continuously with the dress the day of the Gala and during transport from Orlando to New York.

Yeah… what?? “Ripley’s VP of Publishing and Licensing, Amanda Joiner”? Is Ms. Joiner a costuming expert or professional fashion archivist? Does she have a professional background in seamstressing, fabric preservation or clothing repair? When you’ve got your VP of Publishing swearing up and down that the dress wasn’t compromised in the least, you’re panicking.

The MM Collection responded with a lengthy IG statement and the before-and-after photos, which they say were taken 52 days apart, before and after the gala. Kim damaged the gown. 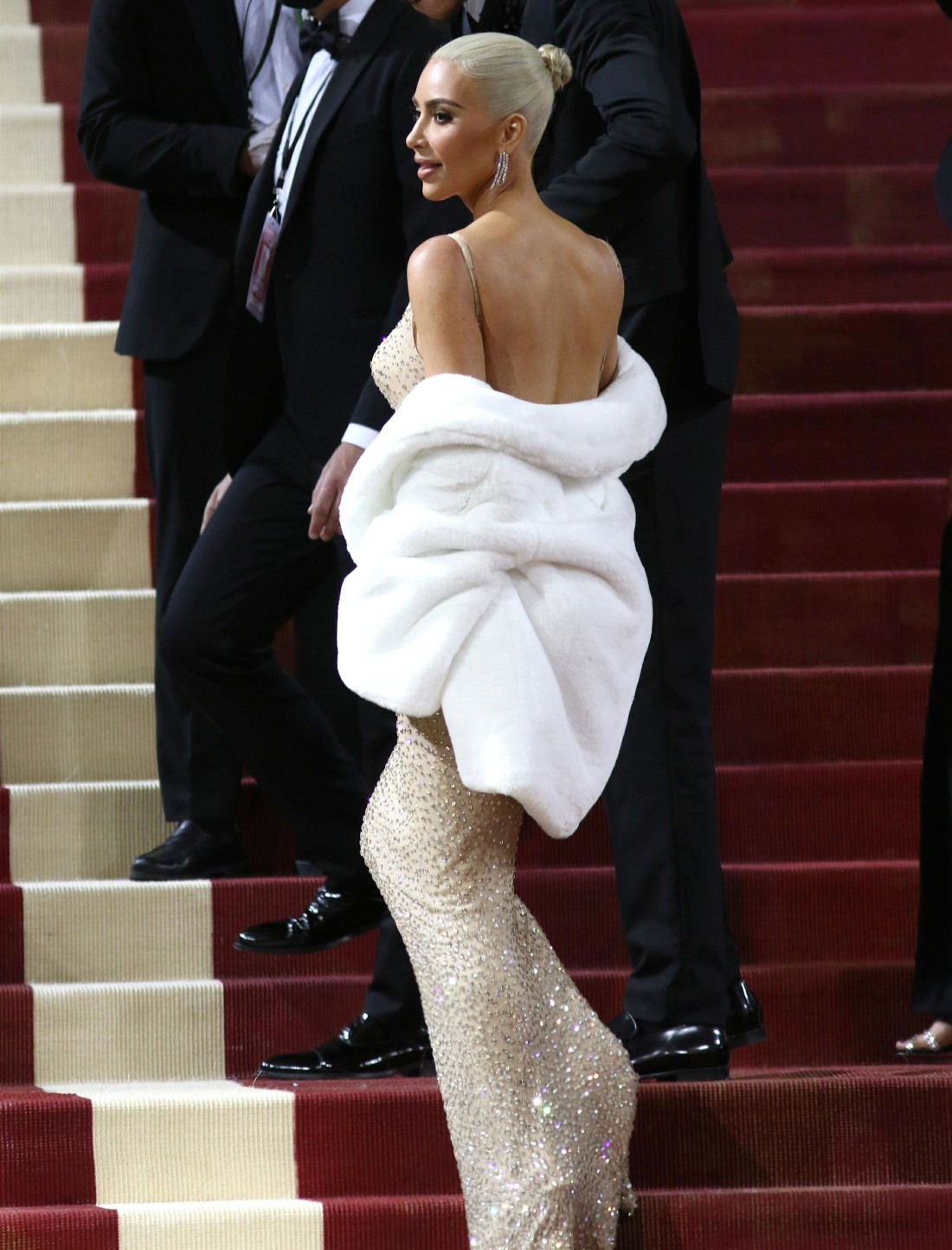