Robbie Williams, 46, has opened up about his brush with death after he was warned by doctors to change his seafood orientated diet or risk putting his life in the balance. The former Take That band member was told he had high levels of mercury poisoning in his body which could have caused him to “drop dead” at any moment.

Mercury poisoning can lead to a metallic taste in the mouth, sickness and muscle weakness.

Recalling the terrifying news, he spoke about his ordeal in a recent interview on Radio X, where he said that the octopus, squid and tuna he enjoyed to eat regularly were doing his body a lot of harm due to the contaminants within the food.

He only came to find out how close he was to suffering a potentially life threatening emergency after undergoing a routine blood test.

The results showed that the singer was in trouble as a build up of the levels of toxicity in his system could lead to more serious illnesses. 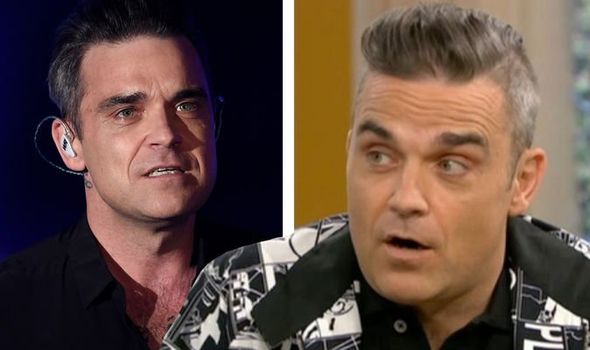 We will use your email address only for sending you newsletters. Please see our Privacy Notice for details of your data protection rights. Alex Jones branded ‘awful’ by Robbie Williams after Take That insult

Remembering the worrying time, he said: “I was eating fish twice a day and I’ve got the highest mercury poisoning the doctor has ever seen.

“Do you know what I thought when I heard that? ‘I’ve won!’ That’s how my ego works, ‘I’ve got the highest…did you say the highest? Thank you.’

“I literally won the mercury award.”

But he noted it was down to the fact that his wife Ayda Field’s own health issues that he found out he was in trouble at all.

Robbie continued: “I got my mercury tested because my wife’s neurotic and she gets all sorts of tests all the time.

“Anyway, thank God, coz I could’ve dropped dead of mercury and arsenic poisoning.”

He added: “I went plant-based the next day,” something he first tried back in 2017.