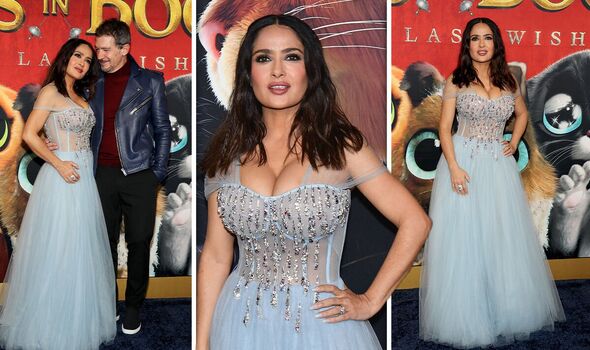 Salma Hayek, 56, dresses like a princess in busty Cinderella-inspired gown for premiere

Salma Hayek looked like a princess as she took to the red carpet last night for the premiere of her latest Hollywood movie in a Cinderella-inspired busty blue gown.

Salma Hayek, 56, looked better than ever as she took to the red carpet in New York on Tuesday night for her latest Hollywood blockbuster.

The actress showed off her incredible figure in the Cinderella-style corset bodice sheer gown.

Salma put on a very busty display in the low-cut number, which boasted short and sheer sleeves, as well as rhinestones.

The actress’s waistline was accentuated due to the corset midsection of the gown, which broke into a softly pleated skirt.

Her dark tresses were styled in a waved middle parting, not distracting from her show-stopping number.

She also showed off her flawless complexion as she beamed for snaps alongside her co-star Antonio Banderas.

Salma Hayek took to the red carpet last night at the Puss in Boots: The Last Wish New York premiere in a show-stopping number. The Hollywood actress stunned in a blue Cinderella-inspired gown, showing off her ample assets and trim waist.

Salma Hayek made sure to make an appearance

Salma Hayek made sure she was the talk of the night as she showed off her elegant sense of style in the pale blue number. Salma put on a very busty display in the low-cut gown, which boasted short and sheer sleeves, as well as rhinestones.

Salma Hayek showed off her ample assets in the corset-style dress which accentuated her curvaceous figure. Her trim waistline was also accentuated due to the midsection of the dress flaring out into a pleated skirt.

Salma Hayek posed alongside her co-stars including Antonio Banderas

Salma Hayek was at the premiere of her latest Hollywood movie, Puss in Boots: The Last Wish. She posed alongside her co-star and pal Antonio Banderas who went more casual for the event in a blue leather jacket paired with a maroon turtleneck and smart black trousers.

Salma Hayek admitted in a recent interview that her long friendship with Antonio Banderas “means so much” to her, calling the actor her “good luck charm”. The Frida star, who has since starred in 81 films, was just 27 when they did a screen test for her breakout role in director Robert Rodriguez’s Desperado, with the actress praising Antonio for her career.