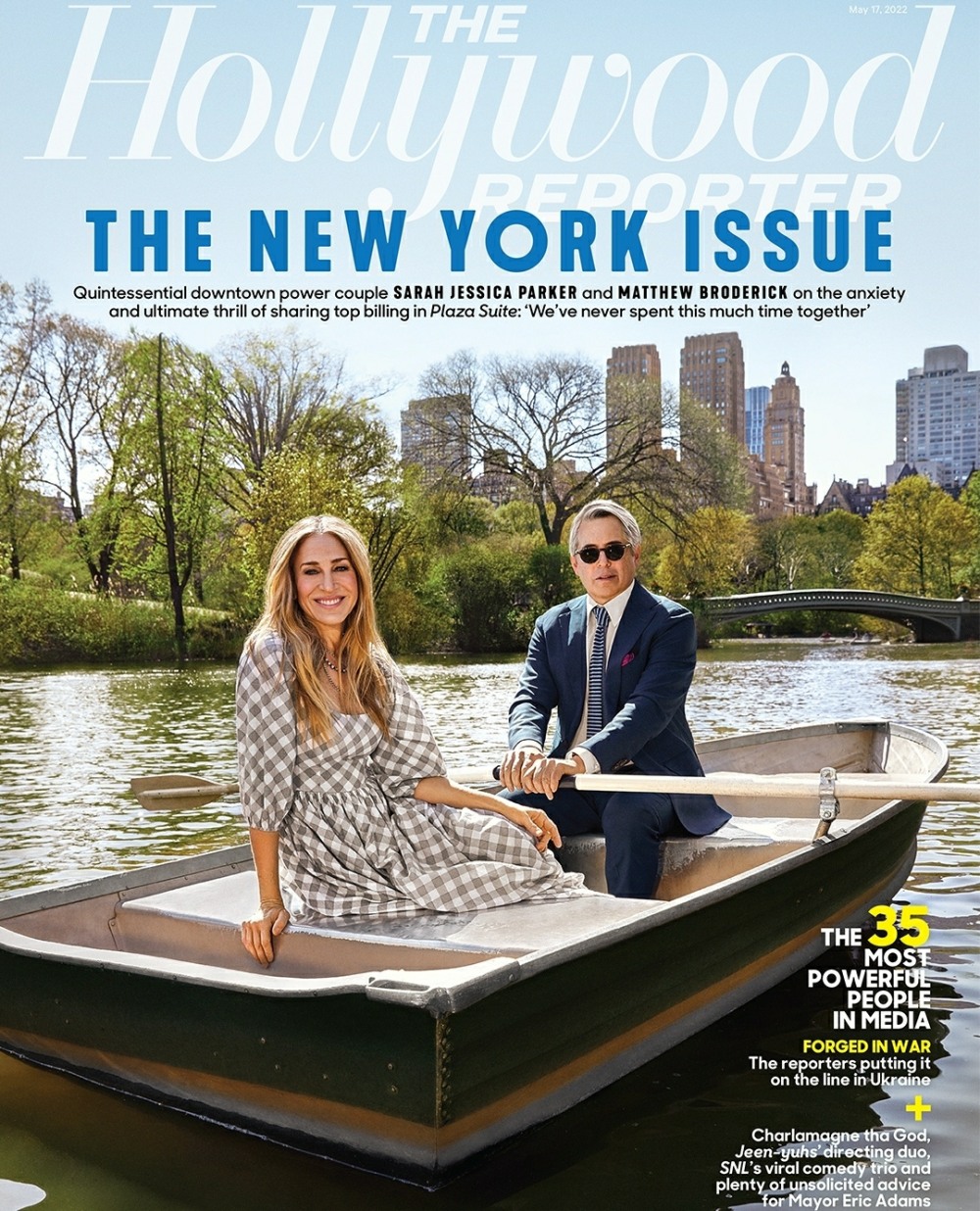 Sarah Jessica Parker and Matthew Broderick cover the latest issue of the Hollywood Reporter. Not only are they one of the most successful couples in entertainment, they’ve managed to be working actors in film, television and theater throughout their whole careers. And they’ve always been based in New York. They’ve been married for 25 years! They’re currently working together on stage in a revival of Neil Simon’s Plaza Suite. The Broadway run was supposed to start in (gulp) March 2020. Two years and two months later, they’re finally back. They both promptly got Covid soon after the production restarted, but both are fine now. Anyway, while I think SJP was a giant brat about Kim Cattrall, I actually enjoyed this piece a lot. It was a window into SJP and Matthew’s marriage. They’re very comfortable with each other and like-minded. I mean, it would be weird if it was the opposite, but still. Some highlights:

SJP on having to cancel when they caught Covid: “We’ve both been much, much, much sicker and performed. It’s anathema to what we’re taught as actors, which is that you perform literally with a 102.3 fever, you vomit in the wings, you come back. It’s very odd to basically not have any symptoms and not be allowed to return to work.

SJP on whether they worried about working together on stage: “Not consciously. I think we were more so thinking about the play, like, “How are we going to do this?” And I only thought about being concerned when people ask us, “Are you concerned that this is going to be harmful to your marriage?” And then I was worried. “Well, should we be?” We’ve never spent this much time together ever, even before we had kids. [The couple has three children: James, 19, and twin daughters, Tabitha and Marion, 12.] Even when we were just dating. But it’s a very different kind of time. It’s not like we’re spending more time together talking. We’re spending time together working in an alternate universe. We’re not ourselves. And we don’t always go out together after the show. And now our days are freed up again. So we still have our autonomy during the day. So it’s feeling more kind of like it used to. But it’s been great.

SJP on how they’ve learned how to talk about each other while still being private: “I think we’ve kind of figured out how we can talk about the work and also be coy about us. Because it seems fair and right: If I was a person interviewing us, and we were doing a play about marriages and relationships, it would be awfully difficult to not ask where it overlaps with our lives. I’ve always said one of the reasons we’ve had success is because we don’t talk about our marriage. I’m not flattering myself that anyone’s discussing my marriage, but we’re certainly not going to add to it by saying, “Well, this is why it works.” Next thing you know, there’ll be a very public divorce. So we just try to respect each other. I think I learned early on when I was talking too much. I was like, “I’m in love. When’s he going to marry me?” Oh my God, I’m so sorry about that. I’m still apologizing for that.

SJP on the credible accusations against Chris Noth: “I don’t even know if I’m ready to talk about it, but I don’t think … I wasn’t reacting as a producer. I should have worked on this because I’m just … it’s just …[THR: Have you spoken to him since then?] No.”

Broderick on whether New York has lost its mojo: “It feels like we’re not sure what it is yet. “Great city if they ever finished it.” That’s what they always say about it. This whole city’s always about to fall apart in some way. [9/11] was very different. Because it was like, “Come outside, come eat, come sit next to other people.” And this time it’s been like, “Don’t come out, don’t help. Don’t spend money.” It’s a little harder to figure out how to come back.

What Broderick misses about New York in the ‘90s: “The ’90s were a little less gentrified, I guess. It was still more neighborhoods. They all start to get a little the same.

The excerpts make it seem like SJP did most of the talking but that’s not really how it was, Matthew was chatty. I think SJP just talks a lot more in general, regardless of who is around. When she apologized to Matthew again for talking too much about him early on in their relationship, he stops her and says “don’t do that.” There really is a sweetness to their marriage. Hm. Anyway…re: New York in the ‘90s, the complaint at that time was that Manhattan had turned into corporate and too safe and gentrified. Back then, people would talk about how much fun the 1970s were. Now people are nostalgic for the less-gentrified ‘90s. Hm.