Both Selena Gomez and Hailey Bieber were guests of the Academy Museum for their second annual gala on Saturday night. The two are often linked by their connection to Justin Bieber, who dated Gomez on-and-off for years before eventually marrying Hailey. The pair seem to wish to put rumors of ongoing conflict to rest, because they posed for pictures together for the first time in public while at the event.

The photos were taken by photographer Tyrell Hampton, which he shared on Instagram. In the first photo, the girls have their cheeks pressed together and are both looking stunning in the camera flash. Hailey liked the image from her account. In another photo shared on a Selena Gomez fan account, they can be seen embracing. 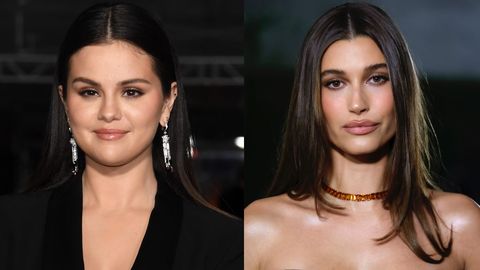 The images come just a few weeks after the entire saga was brought up again during an interview with Hailey on Call Her Daddy. There have been rumors that the timeline of her relationship with Justin overlapped with Gomez’s, which she denied.

“When him [Justin] and I ever started like hooking up or like anything of that sort, he was not ever in a relationship ever, at any point,” Hailey said. “It’s not my character to mess with someone’s relationship.”

She continued, “A lot of the hate, and the perpetuation, comes from the misperception, ‘Oh, you stole him.’ It comes from the fact that they wished he had ended up with someone else and that’s fine. You can wish that all you want but that’s just not the case.”

Hailey said of Justin’s relationship with Gomez, “It’s hard for me to talk about this because I don’t want to talk on either one of their behalf, again, because it was their relationship, and I honestly respect that very deeply.”

She added, “I just feel like there’s a little bit of that anxiety of people will probably take it the wrong way or I just don’t want to say something that is being disrespectful or bringing up something that can stir up feelings for someone. I know that we’re just all so moved on from any type of drama, and I’m so happy for that so I get nervous about talking about it because I don’t want to like stir anything up or bring anything up that is going to be like a thing.”

Hailey also stated that she and Gomez have spoken since her wedding to Justin, adding, “There’s no drama, personally.”

After the podcast release in late September, Gomez did a TikTok Live in which she commented on fan response to the former love triangle saying that “some of the things that I don’t even need to be aware of are just vile and disgusting, and it’s not fair, and no one, ever, should be spoken to in the manner that I’ve seen.”

She ultimately asked her followers to “be kind.”