Shanna Moakler has doubled down on her claim that she caught Kim Kardashian and Travis Barker having an affair years ago—which multiple sources close to Kim have completely denied. The model and former reality star spoke to Us Weekly, saying she was “never” friends with the Kardashians because “I divorced my ex because, I saw them—I caught them having an affair.”

She clarified that she was talking about Kim, alleging, “Someone sent me all their [text] conversations and I’m also close friends with people who were there, while things were happening.”

Shanna went on to claim, “He had already had an affair with Paris Hilton. And…at the time Kim was Paris’s closet organizer, they were best friends. And he started using [Kim] as a model for [his clothing company], Famous Stars and Straps.” She continued to allege that she asked Travis “not to use” Kim as a model because of her ties to Paris, and that “We were working on our marriage and trying to heal through that affair, that infidelity, [but] he continued to [work with her]. And then I received all the text messages and the other third parties kind of let me know. It’s something I was well aware of.”

Shanna also added, “He is dating her sister [Kourtney] now, so I think that would be really weird.” 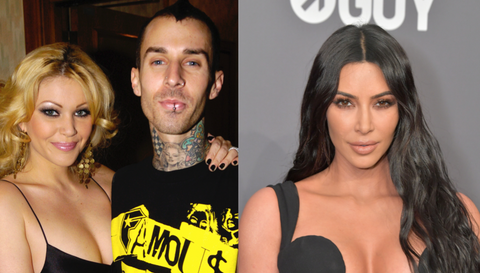 None of the Kardashians have commented on Shanna’s claims publicly, but an insider told Page Six that “Travis and Kim have never had a romantic relationship” and “They were friends who met through Paris Hilton and that is also how Kourtney and Travis were introduced.” Kourtney and Travis have also been neighbors for years at this point.

Another source told the outlet “It’s a shame that [Shanna] continues to spread lies because she is clearly bitter her ex is happy and has moved on. It’s extremely hurtful to her kids how she is behaving. Hopefully she gets the help that she needs and can eventually find happiness.”

You love all the deets on celeb news. So do we! Let’s overanalyze them together.