Is there beef between The Kid LAROI and his former manager Scooter Braun?! It seems like it, at least according to the singer’s new TikTok video!

On Wednesday, the 18-year-old performer took to the social media platform to upload a short snippet of his upcoming single Thousand Miles, which features the lyrics:

It was the “mistake” line that fueled the apparent shade.

The video shows LAROI bopping his head to the track while encouraging his followers to “show me ur last mistake.” Then as the song continues to play, the Without You artist flashes multiple photos of Scooter across the screen! DAMN!

Ch-ch-check out the seemingly shady AF video (below):

In case you didn’t know, LAROI originally signed with Scooter’s SB Projects back in June 2021 before leaving four months later to sign with Adam Leber at Rebel Management. While the Australian rapper has not spoken publicly about why he said goodbye to SB Projects, Billboard previously reported that he switched to a new management team because he thought Scooter wasn’t involved enough in his career despite making “a promise” to be.

For his part, the 40-year-old manager told the publication that things ended between them amicably. He said in a statement at the time:

“LAROI is a brilliant artist, and I wish him and his family nothing but the best. I’m proud of the historic success we had together in our short time – I am rooting for him always, and he knows that.”

LAROI also collaborated with the record exec’s favorite client Justin Bieber on the popular track Stay, so it did seem like they were on good terms. So what happened between them to make their relationship seemingly take a turn now?

Plenty of Scooter haters were quick to buy into the feud narrative — especially Taylor Swift fans! It’s certainly easy for them to believe LAROI might have some regrets about working with the manager. One Swiftie posted a comment referencing her highly-publicized feud with Scooter that read:

“Welcome to the Taylor swift team”

And more evidence of a feud? The Kid LAROI liked it!

Very telling if you ask us!

Or is it all just for show?? Variety reported that sources for both guys claimed that the Schoolboy Records founder gave LAROI permission to be included in the video. And they both plan on releasing some follow-up videos soon.

In fact, Scooter himself took to Instagram Story on Thursday morning and posted proof — images of texts between the two, showing that LAROI sent him the video first to get his blessing, which he gave! 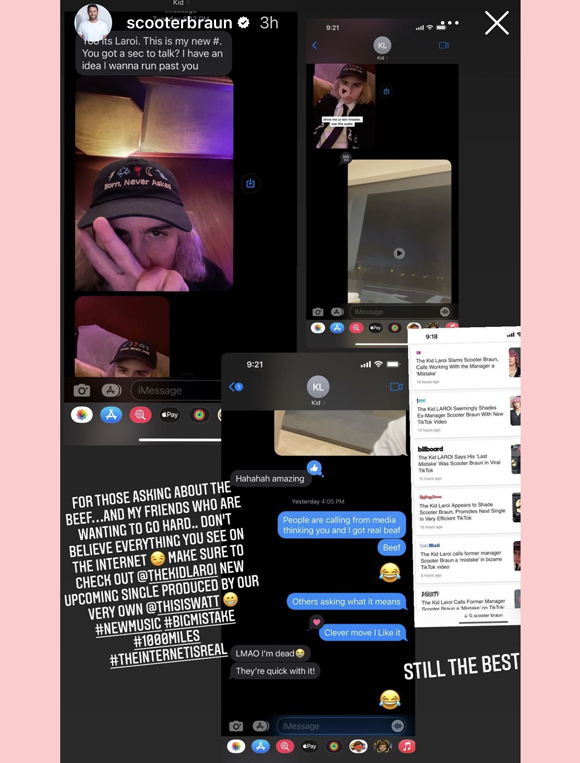 Wait, so if it’s all a stunt, isn’t it kind of self-defeating to give the game away immediately like this? Basically telling us there’s nothing to see here? That suddenly seems so much less intriguing… Seems like maybe this was the most recent mistake??