What Was the 2nd Most-Watched TV Channel on Super Bowl Sunday?

Are Twitter and Netflix Taking a Hit for Overperforming in New Subscribers Early in the Pandemic?

Aside from the fact they’re both tech giants based in the San Francisco Bay area, Twitter and Netflix don’t have a ton in common. But Twitter’s fourth quarter earnings report on Tuesday revealed the two companies have both been impacted by what Netflix has previously called the “pull-forward effect.”

When the coronavirus pandemic first hit, it accelerated user adoption of certain services — in essence, pulling forward demand so they nabbed more subscribers than expected early on. That led to some financial quarters with turbo-charged user growth early in the pandemic, with millions of people deciding to add certain apps to stay entertained while sitting inside all day. The tradeoff, though, is that user growth in future quarters may be underwhelming, since people signed up earlier than expected.

This clearly impacted Twitter during the second half of 2020. Twitter on Tuesday said it added 5 million daily active users (DAUs) during Q4, bringing the company to 192 million DAUs overall, but falling short of the 6 million users Wall Street had expected during the holiday quarter. That was coming off a lackluster Q3 for Twitter, when the company added only 1 million daily users and also failed to meet analysts’ expectations. The 6 million combined DAUs added during Q3 and Q4 stood in stark contrast to Twitter’s big second quarter, when it added a company-record 20 million daily users. 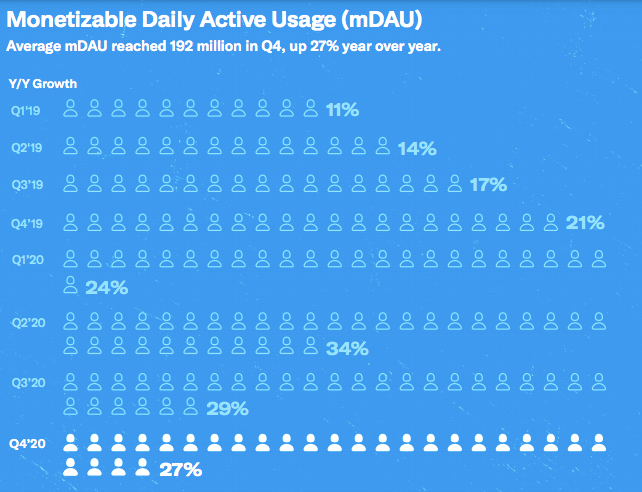 The Q2 spike, Twitter explained at the time, was “primarily driven by external factors, such as continued shelter-in-place requirements for many people.” On Tuesday, Twitter struck a familiar tone, saying its 2020 growth had benefited from several factors, including the “increased global conversation around COVID-19” and the news surrounding U.S. elections.

This wasn’t unique to Twitter. Netflix saw much of its projected 2020 user growth pulled forward early in the year due to the pandemic — while new subscriptions lagged in later months as the quarantine period dragged on. (The company announced last month that it hit 203 million subscribers worldwide, though earnings fell under expectations.)

This isn’t necessarily a bad thing — grabbing customers sooner rather than later has its advantages.

That was evident on Tuesday, when Twitter topped analysts’ Q4 revenue and earnings estimates, including posting its second-ever quarter with at least $1 billion in sales. More users drive more ad revenue, which makes up about 90% of Twitter’s total sales.

Twitter investors didn’t seem to mind that the company fell a bit short of user growth projections, with the company’s stock jumping 3% in after-hours trading to $61.90 per share; if those gains hold through Wednesday morning, Twitter will set a new 52-week high on Wall Street.

Still, the pull-forward effect has been one of the more interesting subplots for tech companies.

The pandemic forced millions of people to make decisions — whether it was adding Twitter to check on breaking news, or subscribing to Netflix while simultaneously cutting the cord — that companies hadn’t necessarily expected to happen as soon as they did.