DAVIS, Calif. — One slouchy, soft-spoken teenager will be conspicuously absent in Gwangju, South Korea when the world’s best swimmers audition to replace the retired Michael Phelps in his franchise event, the 200-meter butterfly.

Gianluca Urlando, a 17-year-old American who wasn’t alive when Phelps’s global reign began in 2001, last month recorded a faster time in the event than Phelps clocked to break his own world record at the same age. The effort vaulted Urlando to third in the 2019 world rankings, more than two seconds ahead of his next-fastest American rival.

“The kid has talent,” Phelps, a three-time Olympic champion in the event, said of Urlando, who will be wrapping up summer school in his hometown, Sacramento, when the first two rounds of the 200-meter butterfly are contested Tuesday at the World Championships.

“Honestly, I’d love to be going to Korea,” Urlando said after a workout this month.

Urlando, who goes by Luca, is one of the rising stars affected by U.S.A. Swimming coaches’ collective decision not to approach the World Championships as an Olympic dress rehearsal. Another is Regan Smith, a 17-year-old who sat out the 100-meter backstroke Monday despite clocking a time last month that was a second faster than either of the two American entrants posted in the preliminaries.

Despite the latest best times, U.S.A. Swimming selected its squad for this year’s World Championships off last summer’s results, the better to keep the athletes’ training focused on peak performances next summer, not now. Lindsay Mintenko, the managing director of U.S.A. Swimming’s national team, conceded, “It’s a totally different philosophy from the rest of the world, but it works for us. It gives our athletes the opportunity to put in that full year of work before the Olympics.” 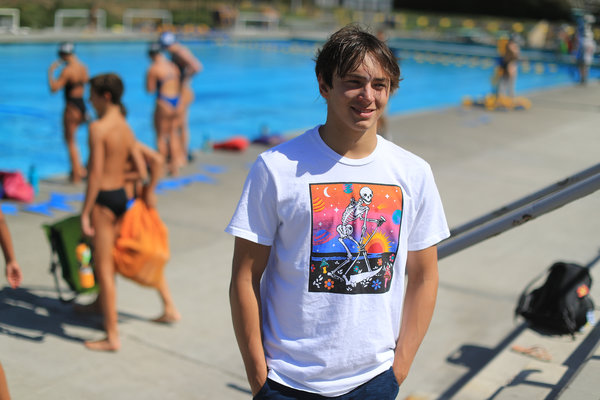 At least Smith, who qualified in the 200-meter backstroke, will get a taste of racing in Gwangju. Urlando’s big meet this year will be next month’s junior World Championships in Budapest. That team will be picked based on performances at the junior national championships at Stanford later this month, where Urlando has qualified in multiple events, including the 100-meter butterfly, 200-meter individual medley, and 400-meter freestyle, where, to his surprise, he recently surpassed 3:53.00.

Neither Phelps nor Katie Ledecky had any major international experience before they made their first Olympic teams as teenagers. So Urlando’s coach, Bill Doughty of the Davis (Calif.) Aquadarts, isn’t worried about Urlando not getting to race the world’s best this summer.

Neither is Dave Durden, the 2020 American men’s head coach, who said Saturday in Gwangju, “Billy knows Luca better than anybody else. I’m 100 percent supportive of how he’s handling this.”

Urlando crashed the podium in the 200-meter butterfly at last summer’s national championships in Irvine, Calif., when he lowered his time more than two seconds to finish third in 1:55.11. The meet felt less like a competition than swimming’s version of “The Price is Right.” All-expenses-paid trips to exotic locales were on the line: berths to the 2018 Pan Pacific Championships in Tokyo and the junior Pan Pacs in Fiji, and international berths this summer to South Korea, Peru and Italy.

Urlando was named to the Pan Pacific team and joined the other qualifiers for a parade around the pool deck. Later that night, the U.S. coaching staff realized his spot on the team rightfully belonged to another swimmer in a different event. Urlando felt forlorn, but not powerless, in the face of the clerical error. They could take his spot, but Urlando insisted on not returning the official Pan Pacs team T-shirt.

Doughty viewed the mistake as a blessing in disguise. Watching Urlando interact with team members, he recognized a teen who matched his peers physically but not socially.

Doughty has been mindful of the age gap since. He directed Urlando to decline a berth on the Pan American team that will travel to Peru later this month because he would have competed only in the 200-meter butterfly. With Urlando improving in other strokes and exploring different events at the senior level, Doughty decided Urlando would be better off taking part in multiple races. Also, Doughty wondered how the shy high school senior would fit in on a men’s team anchored by two swimmers at least a decade his senior — Nathan Adrian, 30, and Tom Shields, 28.

“We have to keep him comfortable,” Doughty said. “I don’t need to throw him in with 30-year-old men.”

Urlando learned the basic strokes as a toddler from his mother, Milissa, who in high school belonged to the same Sacramento-area U.S.A. Swimming team as Summer Sanders, a two-time gold medalist at the 1992 Olympics. Urlando’s father, Alex, is an Italian-born track athlete who starred in the throwing events at Georgia, where he and Milissa met as students and where Urlando plans to enroll in the fall of 2020.

Like Phelps, who played other sports as a child, Urlando tried water polo, basketball, soccer and tennis. He even dabbled in tap dancing. Urlando decided to focus on swimming when he was 11, roughly the same age that Phelps dropped his other activities.

Urlando entered his first 200-meter butterfly after someone mentioned to his mother that it offered the easiest path to the final because so few swimmers liked the event. He developed an affinity for the race as he perfected the timing of the double-arm pull and kick.

“Once you get the rhythm of the stroke down, I think it’s the easiest of all the 200s,” he said.

Urlando can make the race look effortless even when he is feeling the strain. He was in heavy training before a Grand Prix meet in Clovis, Calif. last month and entered the race with leaden limbs. The somnolent atmosphere on the deck did little to fire him up. “I’m not feeling this two fly,” Urlando recalled saying to Doughty before the final.

That got the attention of Phelps, who said he was lucky. Phelps’s breakout swim had come only a few months before his first Olympic trials, in 2000. To manage expectations, Phelps’s coach, Bob Bowman, forbade anyone from uttering the word, Olympics, in front of Phelps, who, at 15, qualified for his first of five Olympic teams in the 200-meter butterfly.

The race goes by fast but a world-class career can span a decade or more. Phelps sent Urlando a congratulatory message along with a few technical tips about improving his kick so he can go faster, no matter where he races next.