In their new Netflix docuseries, Murder Among the Mormons, filmmakers Jared Hess and Tyler Measom recount the 1985 Salt Lake City bombings, including their impact on the Mormon Church and the involvement of document dealer Mark Hofmann, who begins the series—and the case—as a victim, before emerging as its prime suspect.

On October 15, 1985, twin bombings in the Salt Lake City area killed Steven Christensen and Kathleen Sheets. The explosive devices were pipe bombs delivered in a box to Christensen’s office and Sheets’ front door. Christensen was a documents collector. Sheets was the wife of Christensen’s former business associate.

The news reports at the time speculated about “disgruntled investors,” financial dealings that would have led someone to assassinate both Christensen and Sheets. It soon came to light that both had been involved with document dealings—particularly the Salamander Letter, a controversial document that was purchased by Christensen and given to the Mormon Church. It was believed Christensen was in the process of buying another document even more damaging to the Church.

Anyone involved with Mormon document business now looked like a potential target for future killings. The next day, on October 16, the document dealer Mark Hofmann, who had found both the Salamander Letter and this new collection of documents—called the “McLellin Collection”—was driving his Toyota MR2 when the car exploded. Hofmann survived.

But the third bombing victim soon became the case’s primary suspect. After a witness identified a jacket worn by the Christensen bomber—and after an associate of Hofmann recognized the item as the document dealer’s—police knocked on Hofmann’s door. The police found the jacket, but no evidence of bombing supplies. They did find documents and financial records which revealed Hofmann was in serious debt and waiting on large document payoffs. Later, police found a document signed by “Mike Hansen,” an apparent alias for Hofmann, who was now believed to be using an organization to forge some of his acquired historical documents. The discovery marked the beginning of the end for Hofmann.

Who is Mark Hofmann?

Hofmann was born in Salt Lake City into the Mormon Church, but accounts by friends indicate that Hofmann had abandoned his faith as early as his teens after discovering inconsistencies in Church teaching. Hofmann dropped out of school after selling his first historical document—a Bible page supposedly written on by Mormon founder Joseph Smith.

Over the next two decades, Hofmann would discover scores of historical documents, related to the Church or otherwise. His biggest “find,” the McLellin Collection, a group of documents that questioned the primary account of Joseph Smith, was reportedly pursued by the Mormon Church for as much as $300,000.

After the bombings and the discovery of Hofmann’s alias, investigators began taking a closer look at Hofmann’s historical documents. Investigators soon determined that Hofmann’s documents were, in fact, forgeries. Hofmann was forging coins as early as his teenage years. He had developed several techniques for aging documents and ink and forging handwriting. 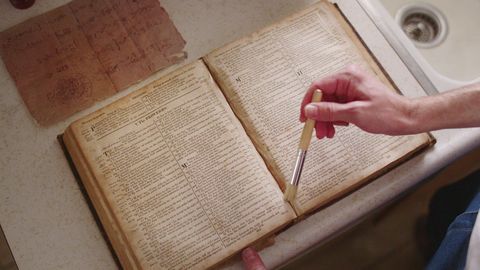 However, Hofmann was in debt. By October 1985, he was still waiting on one forged document to be sold—the “Oath of the Freeman,” reportedly the oldest printed document in American history and worth over $1 million—and hadn’t yet completed his forging of the McLellin Collection. His time was running out, as Christensen supposedly suspected Hofmann’s duplicity and reportedly threatened to have him arrested.

Hofmann would later take a plea bargain with prosecutors after the bombings, agreeing to explain why and how he performed his crimes.

“The bomb parts for the first two bombs were purchased a week or two before they were constructed,” Hofmann told police in an interview, played during the Netflix documentary. “My idea at that point was to have those materials to keep my options open. So probably the same day I made that purchase is when I first considered taking life to get myself out of the jam that I felt I was in. I felt at that time like drastic measures were called for. Someone would have to die. But I didn’t know who.”

Hofmann told police he was always fascinated with why people believed what they believed—how if something was believed to be true, it became, in some way, true. “Fooling people gave me a sense of power and superiority,” Hofmann said.

Hofmann was sentenced to five-years-to-life, though in a parole hearing the following year, he was ordered to spend the rest of his life in prison.

Where is Mark Hofmann now?

Hofmann is still serving out his prison sentence in Utah. In 2016, he was moved out of maximum security. He had, by then, allegedly attempted suicide twice. The Salt Lake County investigator on the Hofmann case, Michael George, explains what happened to Hofmann: “Mark had been stashing sleeping pills that he was getting from other inmates. And when he went unconscious, his arm got folded underneath him and it cut off the blood supply to the point that he never used it to forge another document again.”

The forgeries, George goes on to say in the interview, were never fully documented. “Who the hell didn’t he forge? I mean it went from George and Martha Washington, to Abraham Lincoln, to John Quincy Adams, to Betsy Ross. He had penned a poem by Emily Dickinson. It was everybody. The list was unbelievable. And we have no idea what the extent of Hofmann forgeries are out there in our communities.”