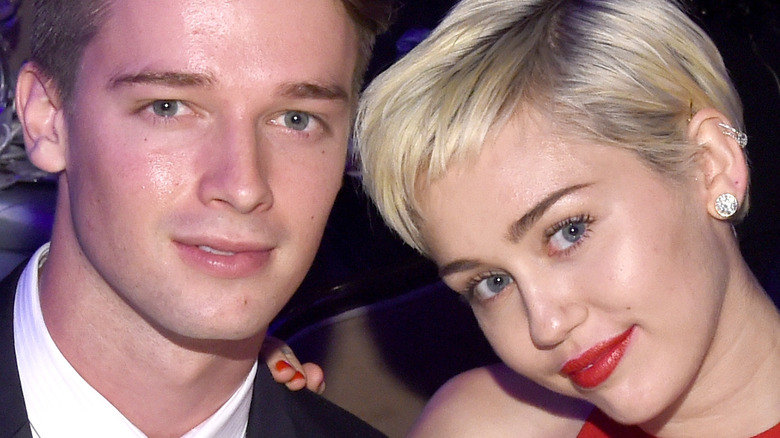 Miley Cyrus has had several highly publicized romantic relationships throughout the course of her career. Most notably, she had an on-and-off relationship with her “The Last Song” co-star Liam Hemsworth for over a decade. Cyrus and Hemsworth were married in 2018 and amicably separated less than a year later, per People. Since the two broke up and got back together numerous times between 2009 and their separation, there were pockets of time in which they both started seeing other people. During one of Cyrus and Hemsworth’s “off” periods, Cyrus began dating Patrick Schwarzenegger, the son of Arnold Schwarzenegger and Maria Shriver.

Cyrus and Schwarzenegger began dating in 2014 and were photographed together for the first time at a college football game that November (via Los Angeles Times). The two were spotted laughing and kissing, and it seemed like they were genuinely smitten with one another. Cyrus and her new beau experienced some ups and downs during their relationship, with Schwarzenegger coming under fire for some questionable photos that emerged of him and an ex-girlfriend on vacation for spring break while he was still dating Cyrus (via Daily Mail). It came as no surprise when the pair broke up less than five months after they first started dating.

The history behind Miley Cyrus' relationship with Patrick Schwarzenegger 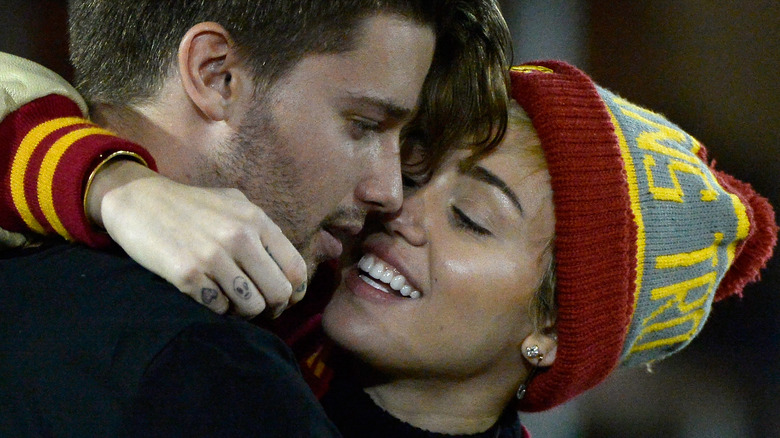 Miley Cyrus and Patrick Schwarzenegger started dating in 2014, but Schwarzenegger had his eye on Cyrus for at least three years before he got the chance to make a move on his celebrity crush. In an interview for Details back in 2011, Schwarzenegger was quoted as saying, “My eye … is set on Miley” when asked about his dating life (via Us Weekly). The two were allegedly introduced by mutual friends, with a source telling Us Weekly, “They have a ton of common friends so they have run in the same circles for years.” With Cyrus splitting from Hemsworth in 2013, the opportunity for a closer relationship with Schwarzenegger finally presented itself.

For a while, it seemed like Cyrus and Schwarzenegger were really happy together. TMZ even reported that the two were considering the idea of marriage! Cyrus gained the approval of her beau’s family, and apparently still remains close to his father, famous actor and former California governor Arnold Schwarzenegger (via ET Online). The pair hit a rough patch, though, when the younger Schwarzenegger was photographed looking extremely cozy with another woman while on vacation for spring break (via E! Online). Schwarzenegger swears the interaction was strictly platonic, but Cyrus clearly thought otherwise. The two tried to make it work before eventually parting ways in 2015 (via People).

So, where do the former lovebirds stand now? After Miley Cyrus and Patrick Schwarzenegger broke up in 2015, it appears as though any foundation of friendship they once shared crumbled with their dreams of romance. There was a brief period where Schwarzenneger was trying to win Cyrus back while still pursuing other women (via The Things). A source told HollywoodLife at the time that “Miley wasn’t convinced Patrick was trying hard enough to win her heart back after the spring break scandal,” and really, who can blame her?

Cyrus eventually reunited with her former flame Liam Hemsworth, and the rest is Hollywood history. It doesn’t appear as though Cyrus and Schwarzenegger harbor any ill will toward one another, but neither has publicly commented on their 2015 split nor the current status of their friendship. Hopefully they found a way to stay civil toward one another, especially if they still share the same friend group.