If you didn’t know Kaitlynn Carter’s boyfriend, Kristopher Brock, then buckle up, because it’s time to take a deep dive into the reality star’s romance. Not only is Kristopher the “Hills” star’s beau of one year, but he’s also her future baby day! Kaitlynn announced she’s expecting her first child with Kristopher, revealing the news via Instagram on Thursday, June 17.

Simply captioning her post with a single black heart emoji, the pregnant TV personality uploaded a pic of the couple as they appeared in the shadows of a stone wall. Kaitlynn and Kristopher could be seen holding hands, but all eyes were on the silhouette of the social media influencer’s baby bump. The pair snapped the photo during a vacation to the Esperanza Resort, a five-star luxury resort and spa in Los Cabos, Mexico, according to the tagged location.

Kaitlynn has been dating Kristopher for the past year, and their relationship comes after the MTV star’s high-profile romances with Miley Cyrus and ex-husband Brody Jenner. Though she hasn’t divulged much about Kristopher, Kaitlynn revealed she “[has] a boyfriend” during an appearance on “Scrubbin’ In With Becca Tilley and Tanya Rad” in December 2020.

“We’ve been dating since May and everything is going really well,” she gushed on the podcast (via E! News). “A lot of friends will ask me, ‘How is everything going?’ and all I can ever say is, ‘It’s going really well,’ because it’s like the most seamless, chill relationship.” For more on Kaitlynn’s beau, keep scrolling! 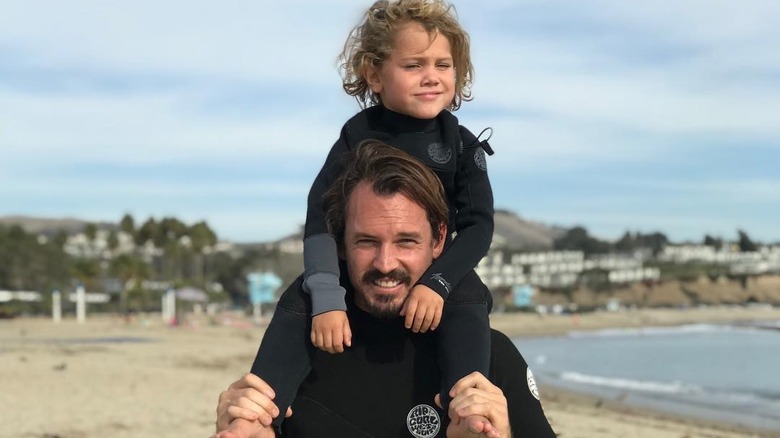 There’s no doubt Kaitlynn Carter is going to be the best mom when she welcomes her baby, and it seems she found the perfect partner, Kristopher Brock, to start a family with. During her appearance on the “Scrubbin’ In With Becca Tilley and Tanya Rad” podcast, the expecting mom-to-be marveled over how happy she was to be in a relationship with such a “mature” guy. “I’ve never had a relationship that was just easy and I don’t want to put anybody else down, but I feel like he’s the first adult I’ve ever dated,” Kaitlynn shared in December 2020 (via E! News), pointing out the reason she hasn’t been “overly” public with Kristopher. “I don’t want to have a relationship that is in the tabloids.”

It’s been a little easier for Kaitlynn to conceal their love affair to the public as Kristopher isn’t a reality star. Instead, he’s a fashion designer, who co-founded his company, Brock Collection, with his ex-wife, Laura Vassar. The “women’s luxury ready-to-wear label” was launched in 2014 after the two met at Parsons School of Design in New York City, per their website.

Aside from Brock Collection, the exes are the parents of their son, Charlie Rose. Kristopher announced the birth of his son via Instagram in December 2014, writing, “#CharlieWrightBrock” alongside a pic of the newborn. We can already imagine how cute Kaitlynn and Kristopher’s blended family is going to be!