While Prince Harry and Meghan Markle have both claimed that they were set up on a blind date by their mutual friend, British designer Misha Nonoo, but before that magical meeting, they were busy playing the field. The Duke of Sussex had many high-profile relationships with ex-girlfriends such as Cressida Bonas and Chelsy Davy, but he was still considered one of the most eligible bachelors in the world when he met his future wife.

Although Meghan Markle’s dating history didn’t receive quite as much media attention as Prince Harry’s earned, the former Hollywood actor also had her fair share of romances. She was married to producer Trevor Engelson for two years before pulling the plug on their marriage in 2013, supposedly sending her wedding ring back to him by mail, as alleged in the book, “Meghan: A Hollywood Princess” (via Hello! Magazine). After their breakup, Markle reportedly wanted to find an “English boyfriend,” as her supposed former friend Lizzie Cundy claimed to Grazia UK. Cundy also said she tried to set Markle up with UK soccer star Ashley Cole. She told the outlet, “I tried to find her a boyfriend – Ashley Cole wasn’t so keen – but I did try to fix her up, which is funny looking back.”

But there was one relationship that Meghan Markle had at around the same time that she met Prince Harry that she seemingly kept under the radar, and he’s also someone she hasn’t spoken about to this day. Read on below to find out who he was.

Meghan Markle and her rumored BF shared this interest 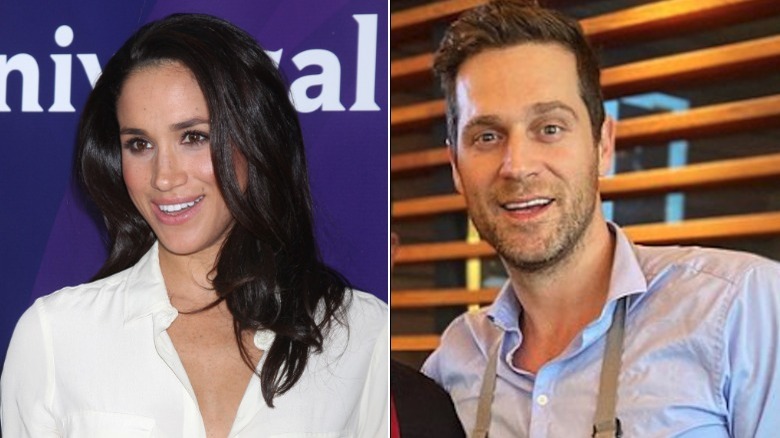 Before Prince Harry even laid eyes on Meghan Markle, he was already interested in her, as according to the royal biography “Finding Freedom: Harry, Meghan and the Making of a Modern Royal Family,” authors Omid Scobie and Carolyn Durand said that both Harry and Meghan did their research about each other before their first day, per The Sun.

However, there was one crucial detail that Prince Harry might have missed in his research. Reports say that Markle was linked to Toronto-based chef Cory Vitiello at the time, per The Telegraph. Considering the star also loves to cook, this could have been a match made in the kitchen!

Yet, Markle and Vitiello broke up the same month that things began to heat up between her and Prince Harry. To this day, Markle has never spoken about her relationship with Vitiello, and when he was asked whether Prince Harry played a role in their breakup, he simply said, according to The Telegraph, “I can’t comment on that.” Fair enough, as no one would want to admit that they were dumped for a royal prince!