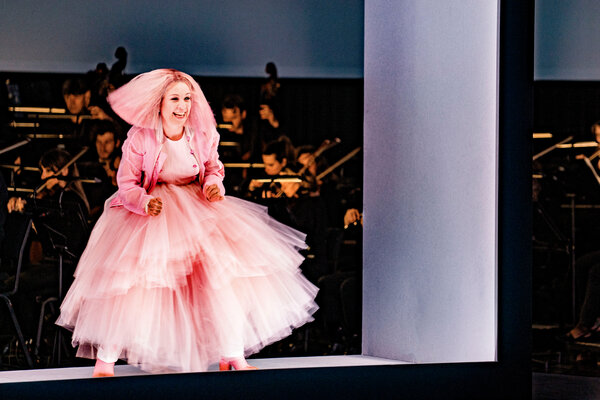 Alexander Zemlinsky’s music bridged the late 19th and early 20th centuries: pushing harmony to new places, while remaining lushly lyrical. And though his catalog fell into neglect after World War II, it has been enjoying a sustained revival campaign in recent decades, thanks to the efforts of conductors like James Conlon.

And the past few years have brought particular attention to his compact, satisfying opera “Der Zwerg” (“The Dwarf”), adapted from an Oscar Wilde short story. The director Tobias Kratzer notched a success with his staging at the Deutsche Oper Berlin in 2019. And now the director Nanouk Leopold has taken on the piece for the Dutch National Opera this season.

That new production’s filmed premiere is free to stream on the Operavision.eu platform (and its YouTube page) until December. Though this staging takes some time to open up, Leopold’s cinematically inspired concept makes a strong case for itself over its 90-minute span. And the music is rapturously handled, thanks to the conductor Lorenzo Viotti, the heldentenor Clay Hilley and the soprano Lenneke Ruiten.
SETH COLTER WALLS

Fall Is Full of Characters

Any young bibliophile can soon enjoy multiple opportunities — all of them outdoors and free — to dive deeply into the world of books, and not just by investigating what’s between their covers.

On Sunday from 11 a.m. to 4 p.m., the Brooklyn Museum will present its annual Brooklyn Children’s Book Fair on the building’s plaza. Thirty local writers and illustrators, whose creations range from picture books to graphic novels, will sign their work and chat with fans. Attendees can make sidewalk chalk drawings and watch the experts sketch: Author-artists including Jon Burgerman (“Splat!”) and Hannah Salyer (“Packs: Strength in Numbers”) will give pop-up demonstrations.

More tales await from New York City Children’s Theater, which is celebrating its 25th-anniversary season with “Storyland Cabaret.” Touring through Oct. 3, this show features numbers from the company’s musicals, many of which were adapted from books. Catch the hourlong performance on Saturday at 1 p.m. outside the Brooklyn Central Library and on Sunday at 11 a.m. and 1 p.m. at the New York Botanical Garden in the Bronx. (Garden admission is required.)

Eager for another literary weekend? Details are online for the Brooklyn Book Festival, which offers its Children’s Day on Oct. 2 and its young-adult presentations on Oct. 3.
LAUREL GRAEBER

Crossing Borders Into the Future

Two River Theater’s Crossing Borders festival celebrates its 10th anniversary with an extraordinary lineup. The four new plays by Latinx artists will be presented in an all-digital edition through Oct. 10.

Paz Pardo’s “Ciertas Astillas,” which is structured like a Russian doll, explores artistic identity and stars Irene Sofia Lucio of “Slave Play.” “Syzygy or, the Ceasing of the Sun” by juliany f. taveras is a rumination on what the future might be like. A delicate tale of youths bonding in a virtual world, “Optional Boss Battle” by Nick Malakhow features moving performances by Reynaldo Piniella and Jake Ryan Lozano.

Lozano also stars in Francisco Mendoza’s “Machine Learning,” which comments on inhuman immigration policies and challenges old-fashioned notions of masculinity. This powerful sci-fi drama is about a son who will go to unimaginable lengths to help his ailing father stay alive.

To get an access link to all four works, R.S.V.P. at tworivertheater.org. Admission is free, but donations are encouraged.
JOSE SOLÍS

Taking His Covers on the Road

With a catalog of vivid songs about struggle, sobriety and the South, Jason Isbell has cemented his status as one of Nashville’s most admired songwriters. But with a new project — “Georgia Blue,” a collection of covers he promised to fans last year based on the outcome of the presidential election in that state — he is turning his focus to the work of other great writers, including Cat Power, Indigo Girls and James Brown.

Out on tour ahead of that album’s October release, Isbell has been road-testing his version of R.E.M.’s “Driver 8.” Venture to one of his shows with the backing band 400 Unit at Pier 17 this weekend, and you’re likely to hear it live, along with songs from Isbell’s solo career and throwbacks from his days as a guitarist with the alt-rock group Drive-By Truckers. The folk-soul singer Joy Oladokun will open.

Performances begin at 7 p.m. on Friday and Saturday; tickets are available at pier17ny.com.
OLIVIA HORN

A Trove of Classical Indian Works

For millenniums, the sacred city of Varanasi in northern India has been the site of ceremonial cremations believed to release the deceased from the reincarnation cycle. In “Fires of Varanasi: Dance of the Eternal Pilgrim,” the esteemed Ragamala Dance Company, led by the mother-daughter artistic directors Ranee and Aparna Ramaswamy, evokes these rituals through the classical Indian dance form of Bharatanatyam. Though the work was conceived before the pandemic to honor the passing of the Ramaswamys’ father and grandfather, its narrative portrayal of life, death and rebirth — at once solemn, celebratory and sublime — is a fitting choice for the Joyce Theater’s first in-person shows since March 2020. “Fires of Varanasi” will be performed at 8 p.m. through Saturday and at 2 p.m. on Sunday. Tickets start at $26 and are available at joyce.org.

Additionally, the 14th edition of the Indo-American Arts Council’s Erasing Borders Dance Festival continues through Sunday with online performances by other acclaimed practitioners of Bharatanatyam and additional classical Indian dance forms, including Kathak, Kathakali and Odissi. For more information on the free livestreams, go to iaac.us.
BRIAN SCHAEFER