How can you get your cultural fix when many arts institutions remain closed? Our writers offer suggestions for what to listen to and watch.

About a Love Letter to the Apollo 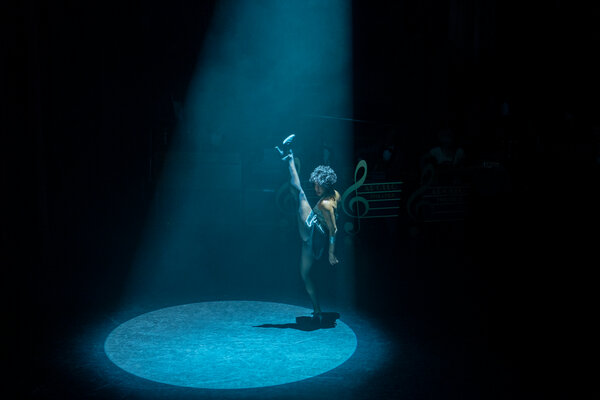 In the recently released video “A Marvelous Night at the Apollo,” members of the team behind the Season 3 finale of “The Marvelous Mrs. Maisel” discuss the making of the episode, “A Jewish Girl Walks Into the Apollo …” The show’s creator, Amy Sherman-Palladino, describes it as a love letter to the Apollo Theater and reveals a personal connection: Her father, the comedian Don Sherman, opened for Dinah Washington at the storied Harlem institution. Washington advised Sherman to drop his act and just joke with the crowd about working with her.

“It was an interesting story that always stuck with me, because I thought, ‘Well, geez, that’s sort of the power of stand-up,’” Sherman-Palladino says.

The “Apollo” episode is nominated for four Emmy Awards, including a guest actress nod for Wanda Sykes, who portrayed the comedy legend Moms Mabley. A fan of Mabley, Sykes recalls in the video her own debut at the Apollo. “I remember not even hearing myself do the jokes because it was, like, I’m looking at the audience, but I kept my eye on Sandman. ‘Where’s Sandman?’” Sykes says, referring to Howard Sims, who steered performers who displeased the crowd offstage.

Catch “A Marvelous Night at the Apollo” on Apollo’s Digital Stage before its fall season starts with a performance by Wyclef Jean on Wednesday.
SEAN L. McCARTHY

Supporting the Bands on Bandcamp

It’s no secret that for all but a rarefied few musicians, record sales alone can no longer pay the bills. Back in March, when tour cancellations wiped out many performers’ livelihoods overnight, Bandcamp took action. This week, the music platform will continue its new custom of waiving its revenue share on purchases made the first Friday of every month, so fans can put more money directly into artists’ pockets.

Have a few dollars to spend this Bandcamp Friday but unsure what to spring for? Among this week’s new releases are several worthy candidates. “Hannah,” the third full-length album by the Texan singer-songwriter Lomelda, continues her project of condensing sprawling musical ideas into bite-size bits. On one standout track, she name-drops herself alongside Frank Ocean and Frankie Cosmos, two artists with whom she shares a knack for poignant introspection.

Consider, also, a second Hannah: Hannah Georgas, whose new album, “All That Emotion,” was produced by Aaron Dessner. Like his recent collaboration with Taylor Swift, “All That Emotion” boasts sweeping orchestration and cozy melodies. For those seeking something with a bit more edge, “Hanging Garden,” the debut LP from the punky Philadelphia trio Corey Flood, should satisfy. Its energetic guitar work makes it somewhat peppier than the group’s first EP, “Wish You Hadn’t.”
OLIVIA HORN

What good is it Zooming alone in your room?

Remember nightclubs? Remember tiny tables, low lights, spilled cocktails and the promise that Bridget Everett might fall into your lap? Cabaret collapsed when theaters and restaurants shut down, as did the alternative cabaret scene, its rounder-heeled, wilder, boozier cousin. Unless someone suddenly discovers that chardonnay has anti-Covid properties, it may be a while until we can again watch Cole Escola play Everett’s fetus or Molly Pope act out artificially inseminating herself to Kesha’s “Your Love Is My Drug.”

But screens provide some comfort. The Stage streaming platform, an eclectic mix of movies, original series and performance documentation, has “Kiki & Herb: Live at the Knitting Factory.” A double act courtesy of Justin Vivian Bond and Kenny Mellman, Kiki and Herb began as fright drag comedy and then evolved almost immediately into something weirder, lovelier and defiantly moving. In this video, which celebrates, as Kiki says, “The Year of Magical Drinking,” the duo, in trashy old-age makeup, play originals and covers — “Boulder to Birmingham,” “The Rhythm Divine.”

A Festival of Interventions

For fans of obscure operas — and lesser-heard symphonies and chamber pieces — the Bard Music Festival is one of the best reasons to stick close to New York in late summer. That’s because the conductor and Bard College president Leon Botstein’s annual event is your best shot to catch rare works by Erich Wolfgang Korngold or Franz Schreker (in North America, anyway). The atypical offerings represent an intervention in American classical programming.

Bard continues this advocacy despite the pandemic: For four weekends in September, it will be streaming live concerts (sans audiences) through its website. And you have to plan to attend on time, too, since festival organizers currently have no plans to archive these gigs. They’ll be free to see in the moment, however. (All you need to do is register online ahead of time.)

First up, on Saturday at 5:30 p.m. Eastern time, is a program featuring music by Mendelssohn and George Walker, as well as two pieces by William Grant Still, often called the “dean” of Black composers. Botstein and James Bagwell will conduct the players in the Orchestra Now, Bard’s pre-professional ensemble that last year delivered stirring performances of Webern and Morton Feldman at the Metropolitan Museum of Art. On the orchestra’s YouTube channel, you can hear its take on Still’s “Afro-American Symphony” from a 2018 concert.
SETH COLTER WALLS

Focusing on Their World

Nine weeks after 15 teenagers enrolled in the Studio Museum in Harlem’s eight-month program Expanding the Walls: Making Connections Between Photography, History, and Community, lockdown began, and the walls (at least figuratively) contracted. The 10 adolescents in the Project: Identity Photography 12-week intensive course at the Bethel Woods Center for the Arts in Bethel, N.Y., faced a similar challenge: They had met only briefly when quarantine started.

These free annual programs equip accepted students with digital cameras and offer them training, mentorship and a final group exhibition of their work. Despite the pandemic, the institutions fulfilled their commitments.

The Studio Museum’s virtual show, “Hearts in Isolation: Expanding the Walls 2020,” which is online through July 2021, features 30 images: desolate streets and shadowy interiors; still lifes of objects, food and clothes; intense portraits of urban solitude. On Sept. 23, the museum will begin Teen TALKS, Instagram Live interviews with some of the participants.

The 49 photographs in Bethel Woods’s “Captured at a Distance” virtual gallery depict a more rural seclusion, with sunsets, forests and flowers. Online through December, the show also has starker images, like those of empty store shelves and parents in scrubs, ready to work hospital shifts.

Accompanied by the students’ statements, the exhibitions reveal expansive creativity even during a time of limits.
LAUREL GRAEBER

In a normal year, the Detroit Jazz Festival would be the world’s largest unticketed jazz event, drawing hundreds of thousands to a free four-day celebration across four stages in downtown Motor City. The performers would range from international stars to local stalwarts for whom this represents the grandest stage there is.

This year, unable to convene a crowd, organizers are presenting a livestreamed version of the festival while still leaning in to its typical blend of local identity and large scale. From Friday through Monday, the festival will offer concerts on three separate indoor stages at the Detroit Marriott. They’ll be shot by a professional crew, broadcast on local TV and radio stations and streamed all weekend on the festival’s Facebook and Instagram pages and YouTube channel.

Opening night will feature the saxophonist and spiritual-jazz doyen Pharoah Sanders, who turns 80 next month; the fusion innovator Robert Glasper will close out the festival on Monday night. In between, a parade of the city’s finest will perform (Rodney Whitaker, Robert Hurst, Joan Belgrave), as well as more stars, like the pianist Joey Alexander and the vocalist René Marie.
GIOVANNI RUSSONELLO

Over the past six months, as so much performance has migrated online, it’s been hard at times to keep up with the sheer volume of digital dance from around the world. A short break is not a bad thing. Labor Day weekend brings a lull in new virtual dance offerings and a moment to explore what’s already out there.

While some institutions have commissioned new works for the screen, others have reached into their archives to release rarely seen recordings of past events. One rich collection is on the Brooklyn Academy of Music’s website: Love From the BAM Hamm Archives, which currently includes more than two dozen talks and performances from the past 12 years.

Two videos in the multigenre collection will be of particular interest to dance lovers: John Jasperse’s enigmatic “Remains,” presented at the 2016 Next Wave Festival; and the luminous 2011 edition of DanceAfrica (an annual spring celebration), titled “Expressions and Encounters: African, Cuban, and American Rhythms,” with appearances by multiple dance and drum ensembles. Click on the credits for each video, and you’ll find troves of related archival materials: posters, photographs, program notes, audio recordings, more performance footage. It’s easy to get lost here, in the best way, and end up far from where you started.
SIOBHAN BURKE