Muddling along for four decades in a nondescript former department store, the Mid-Manhattan library, at Fifth Avenue and 40th Street, served a growing swarm of local residents and commuters even as the branch steadily became a dilapidated “embarrassment” to the New York Public Library system, as Anthony W. Marx, its president, put it.

After three years of construction and $200 million, the library system was ready to reopen its largest circulating branch in spring 2020. Instead, the pandemic extended the closure. The Stavros Niarchos Foundation Library, or SNFL, as it is now known (after a $55 million gift), finally threw open its doors to unlimited browsing in June.

Its theatrically expressive heart is a dramatic atrium billowing upward from the second floor, where book lovers will delight in a vista of the vast circulating collection of up to 400,000 volumes. The branch is phasing in its extensive programming over the coming months. (On July 6, the New York and Queens library systems fully reopen, and Brooklyn will follow days later.)

Libraries have taken on the great task of helping people acquire knowledge, whatever the means of delivery, and have become more central to community life. The sociologist Eric Klinenberg made libraries Exhibit A in his 2018 book, “Palaces for the People: How Social Infrastructure Can Help Fight Inequality, Polarization, and the Decline of Civic Life.” He argued that “social infrastructure” — public places where people mingle and interact — can help reduce crime, isolation, and even strengthen communities. 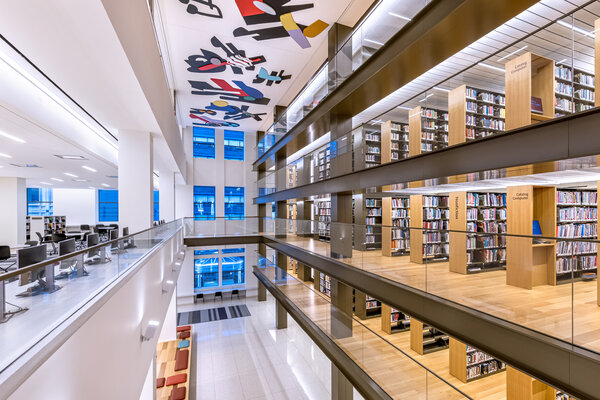 That’s why the Stavros Niarchos now delights book obsessives but also offers lines of computers atop long tables and a dizzying array of technology training, career exploration, life-skills help, and personal enrichment in its 180,000 square feet. Marx called this “a more proactive model of the library” on a recent walk-through.

The Stavros Niarchos has risen from the ashes of a much grander $300-million plan in 2012 by the London architect Norman Foster to bring the circulating library into the main library, the Stephen A. Schwarzman Building, diagonally across Fifth Avenue, and sell off the Mid-Manhattan building.

Foster would have emptied a dense network of stacks in the flagship and carved out a grand atrium uniting the circulating collections with elaborate stairways. Inconveniently, the stacks also held up parts of the building and the cost to intricately insert replacement supports, as well as researchers’ vehement resistance to moving most of the material in the stacks offsite — and blowback by critics — caused the plan to implode in 2014.

Marx, who fought tenaciously for the Foster plan, now professes approval for the decision to renovate rather than replace the Mid-Manhattan. The two libraries work together, he said. The main library remains devoted to on-site research, while visitors seeking less rarefied materials can find them shelved in the Stavros Niarchos.

The architect of the transformed Mid-Manhattan is Francine Houben, founding director of Mecanoo, based in the Dutch city of Delft. Houben is known for such challenging library designs as a largely subterranean facility at the Technical University, Delft, in which a wedge-shaped roof covered in grass erupts from the ground to form a sloping lawn popular for lounging and sunbathing. For the Mid-Manhattan branch, she partnered with Elizabeth Leber, the managing partner of the New York architecture firm Beyer Blinder Belle.

Houben sometimes underplays her hand. Without bright-orange banners suspended from the nondescript limestone envelope of what was once the Arnold Constable & Co. department store, you would never know the SNFL was a library. (Its original architect was the little-known T. Joseph Bartley.) No one would expect the Mid-Manhattan to compete with the flamboyance of the Carrère and Hastings flagship. But is it too much to ask that the library more expressively invite in those with a love of learning?

The airy daylight-filled ground floor is appealing but focuses too much on the checkout desk, where those who have chosen their books online “grab and go.” Wouldn’t Houben want patrons to linger? The redesign could have done more to invite people to discover the extent and richness of the collections and programs above and below street level.

After all, the dramatic atrium, only one floor up, amply rewards a visit. Houben and Leber painstakingly cut 85-foot-long by 17-foot-wide openings through the third and fourth floors so that visitors could see into all three floors of the circulating collection at once. These floors are expansive, with sleek white walls, low book stacks and an abundance of seating filled with daylight by the oversize store windows.

In clearing the library of the detritus of decades, Houben turned an inconvenience, the building’s forest of columns, to advantage by cladding them in varying materials to create a hierarchy that helps people find their way around and provides a variety of places to sit: around long, broad mixed-hardwood tables attached to the columns or work surfaces that run along the perimeter enabling contemplation of the city through the big windows (or just procrastination). Each floor has separate rooms for group work. Bridges connect these areas across the atrium to five levels of floor-to-ceiling stacks that the architects have squeezed into the atrium’s three stories. This wall of volumes forms a glowing shrine to the book accessible to all.

Abstract colorful shapes dance across the ceiling, an invented 31-character alphabet by the artist Hayal Pozanti.

For the many who find libraries obsolete in a point-and-swipe era, such devotion to paper pages and cloth covers seems anachronistic. After all, as we emerge from our Zoom caves, don’t books feel … old? Do we even remember what libraries are for?

The New York Public Library is having none of that.

Above the collection floors the spaciousness and daylight is leavened by a corporate sobriety in three floors devoted to programming that helps people address essential knowledge gaps. A smaller version of the atrium is reproduced to join a fifth-floor Business Center with the sixth floor Learning Center. The fifth floor hosts stacks and reading spaces for the circulating materials brought over from the Science Industry and Business Library, a nearby branch that has been closed.

Like many of the neighborhood branches, the Stavros Niarchos programs will address community needs. The sixth-floor classrooms and breakout spaces offer business basics, career advancement, and networking opportunities. The importance of such programs has grown rapidly in recent years, with attendance doubling to two million since 2012.

A sleek new suite of glass-partitioned rooms for hosting public events has been mounted on the old roof. It is topped by a wedge-shaped green-painted penthouse that Houben referred to as the Witch’s Hat, an angular form that gracefully disguises mechanical equipment.

Here, there’s a coffee shop and an outdoor public terrace that opens to views of the main library and the skyscrapers that hem in Bryant Park. Visitors will discover a lush little “secret” garden tucked into a back corner.

A visitor may need help finding the enormous yet sober children’s area one level down from the street. (I’m assured furniture yet to be installed will cheer things up.) A teen center includes a recording studio and computers loaded with photo and imaging programs. The rest of the library could use more of the nutty exuberance of murals designed by Melinda Beck.

The best architects of the branch libraries understand that their designs must explicitly welcome people to the full range of offerings within. Sandro Marpillero and Linda Pollak attached cubes of glass to their East Elmhurst branch to showcase activities inside. The stunning Hunters Point library in Queens, by Steven Holl, lures patrons to every collection via gorgeous stairways, light-bathed ramps, and intriguing passageways. Just-opened renovations to Brooklyn’s Central Library by Toshiko Mori prominently include a Civic Commons that connects people to a variety of services and community events.

Improvements to the Schwarzman building are intended to clarify its relationship to the circulating collections, including a planned entrance and terrace on 40th Street, where it is closest to the Stavros Niarchos. A Center for Research and Learning will be built in the main building, where children and students will learn about research techniques and the value of engaging with archival sources. “Peoples’ lives will take them to one building or the other according to need,” Marx said.

Those improvements could lead to a more explicit architectural signaling of the extraordinary resources available at the Stavros Niarchos. Librarians throughout the system know that many people who need their extensive services don’t know they exist. This library will truly come to life when passers-by can gaze into those monumental windows and see people studying, talking, arguing or simply sitting with a book open, staring dreamily at the city.