EL PASO — The young migrants often arrived at night. They were teenagers from Central and South America, brought by border agents to the Tornillo Detention Facility and led to rows of metal bunk beds in military tents ringed by barbed wire. Human touch, even a simple hug, was rare inside this secured temporary city, where nearly 3,000 unaccompanied minors at a time were confined between June 2018 and January 2019. In this harsh environment, the Chihuahuan Desert, imagination and faith helped them make it through.

The Rev. Rafael Garcia, a Jesuit priest from South El Paso, got his first inkling of the creativity within the camp when he noticed a cross with a red Sacred Heart entwined in yarn, handmade by incarcerated youngsters. Seeking asylum from El Salvador, Honduras and Guatemala, they would go on to create ingenious tableaus inspired by their homelands: a miniature soccer field with pipe-cleaner players kicking a polka-dot cotton ball, for instance. Or an elegant church with a crepe paper dome resting on a painted sign that read “Female UAC” — unaccompanied alien children. Someone had borrowed it from the restroom.

The inventive artworks by children who wound up in Tornillo are the subject of a haunting exhibition, “Uncaged Art: Tornillo Children’s Detention Camp,” at the Centennial Museum and Chihuahuan Desert Gardens at the University of Texas at El Paso, through Oct. 5. Crafted from memory, the scenes were fashioned from humble materials like bottle caps and Popsicle sticks as part of a social studies project in which a few creative teachers assigned to the camp asked the children to commemorate their native cultures. Birds — especially the emerald-tailed quetzal, the national bird of Guatemala and a symbol of freedom — were a recurring theme. 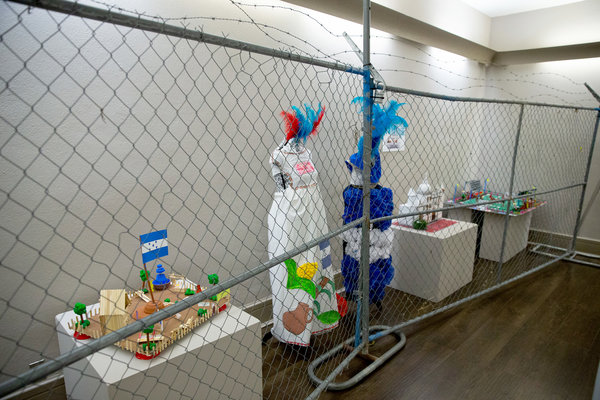 “If you cut the wings of a bird, it is no longer free,” explained a 17-year-old Honduran youth who gave his name only as Freddy. He spent two and a half months at Tornillo and is now living with a family member in Texas, awaiting an asylum hearing. Freddy traveled alone by foot, bus and car from his rural village. Through a translator, he spoke of swimming across the Rio Grande, and said it took him five hours to locate border agents to request asylum. For him, the most difficult moments were seeing children faint or weak from hunger left behind en route. Freddy said he wondered whether he might at Tornillo for the rest of his life.

Tornillo was opened to help the federal government manage an influx of children entering federal custody, those who had traveled alone as well as those who became “unaccompanied” after being separated from parents at the border under the Trump administration’s “zero tolerance” immigration policy. The temporary tent shelter was operated by Baptist Child & Family Services under contract with the Office of Refugee Resettlement; typical stays were between 60 and 70 days. But some detentions stretched into months, in violation of the Flores settlement agreement, which limits the length of time children can be held in an unlicensed facility to 20 days.

While no one is claiming that art saves lives, professionals working directly with detained youths in Texas and elsewhere have pointed to the healing properties and confidence art can engender in those who have felt powerless and alone. Attorneys and human rights activists routinely use art as a vehicle for communication that is independent of language and literacy. Crayons and paper “can be the portal into the child’s brain and what they’ve seen,” said Holly S. Cooper, a co-director of the University of California, Davis, Immigration Law Clinic, who frequently uses art to elicit information about traumatic incidents from detained migrant children.

The design of the “Uncaged” exhibition recalls the Tornillo confinement down to the chain-link fences and bunk beds that teens enlivened with bits of yarn. The show’s 29 paintings, drawings, costumes and elaborately detailed dioramas were salvaged before the camp was closed in January. Among them is a Honduran national park with a fountain crafted from upside-down cups, and a cut-cardboard cathedral wrapped in vibrant aqua tissue paper with Popsicle stick pews for the faithful.

That any art survived is due largely to Father Garcia was one of a handful of priests allowed inside the facility to say Mass. As the tents were taken down, the staff threw away hundreds of artworks. The pieces now on view were destined for the trash heap, too, until Father Garcia intervened. He contacted Dr. Yolanda Chávez Leyva, an associate history professor and director of the University of Texas at El Paso’s Institute of Oral History. When the rescued art arrived there, most of the creators’ names had been redacted. The only identifications were the military-style nicknames organizers gave the children’s tents and units — “Charlie 1” and “Bravo 20.”

“These are unaccompanied minors,” Father Garcia said, in an interview in Duranguito, a historically immigrant neighborhood of El Paso. “But they are also talented children who have a desire to be productive human beings.”

Despite their circumstances, the children's’ work was often infused with buoyancy, wit and prideful affection for landmarks of their native countries.

“There’s a sense of joy and beauty in the art that reflects everything in the environment they were being denied,” said Camilo Pérez-Bustillo, the former director of advocacy and research for the Hope Border Institute, a human rights organization in El Paso, who interviewed children at Tornillo. “They could recover their identities and not be reduced to numbers on a wristband.”

Recent drawings by three children at the Catholic Charities Humanitarian Respite Center in McAllen, Texas, showed figures in border patrol custody in cages, some of them upside-down. “The drawings express a lot of darkness,” said Sister Norma Pimentel, who oversees the center as director of Catholic Charities of the Rio Grande. But she also pointed out that most of the art generated by youths was hopeful — full of hearts, houses and “I (heart) you’s.”

“It shows their resilience,” she said.

Tornillo closed after a federal watchdog warned of serious health and safety concerns at the facility. The Trump administration said last week that it planned to open a new, 2-500-bed facility for adults on the same site. The camp’s scale has been replicated in Homestead, Fla., where some 2,200 unaccompanied children are currently being held. And, six miles from the Centennial Museum, hundreds of migrants sleep huddled together on caked dirt in an outdoor holding camp on the Mexican side of the bridge linking Ciudad Juárez and El Paso.

In “Uncaged Art,” Ms. Leyva and her co-curator, David Dorado Romo, a historian, draw parallels between Tornillo and detention environments including the Japanese-American internment camps of World War II — where detainees beautified their surroundings with found materials. They made furniture, teapots and other objects. “Making art, which they sometimes exhibited within the camps, provided both children and adults a way to escape their dreary circumstances and to express their humanity,” the curators write in the exhibition text.

Historical comparisons, especially to concentration camps, have become a fraught tripwire in the national debate over immigration. The recent influx of migrant families has drained existing resources and led to the kind of overcrowded, unsanitary conditions found at a border station in Clint, Texas. But many, both inside and outside the Trump administration, argue that the migrants, whose chances of winning asylum are not good, should not even be making the trip and that parents who send their children off alone are doing them a grave disservice and even endangering their lives. Parents have said that they are facing gang violence and extreme poverty.

From El Paso to Phoenix, art has been a tool used in the healing process for young people who have been released by U.S. Customs and Border Protection and are waiting to connect with sponsors who can help with transportation.

“It’s the non-endingness of it,” said Ruben Garcia, the director of Annunciation House, a nonprofit here that provides shelter, showers and hot meals to hundreds of asylum seekers who have been processed and released by Immigration and Customs Enforcement. Most stay a day or two before boarding a bus or plane to join relatives elsewhere in the United States.

The nonprofit recently took over a Walmart-size warehouse, christened Casa del Refugiado, whose Red Cross cots can accommodate up to 1,100 migrants To make the site more welcoming, young local artists were enlisted to spruce up the 125,000-square-foot space with vivid murals. One includes the word “esperanza,” or hope.

Even half a crayon can offer a calming, absorbing activity for children when their parents are speaking with attorneys in crowded trailers, recounting the violence that led them to seek safety in the United States. “These things give a degree of normalcy,” said Dr. Anita Ravi, a family physician in New York who specializes in sexual violence. “I think kids ache for that.”

Trauma manifests itself in different ways, said Dr. Ravi, who has assisted asylum seekers at the South Texas Family Residential Center through the Dilley Pro Bono Project. “The older adolescents, especially the girls, would sometimes sit there and quietly cry,” she said.

At a day center for asylum-seeking families in Phoenix run by the International Rescue Committee, a 7-year-old Guatemalan girl asked to borrow a Post-it note. During 15 minutes of conversation between her mother and an interviewer, the girl transformed five hot pink Post-its into tiny, floral-patterned canvases.

“You can almost see the moms exhale seeing the kids enjoying themselves,” said Ellen Beattie, the I.R.C.’s senior director for program quality and innovation in the United States. “They’ve been gripping them, holding them close, afraid to let them out of their sight.”

In El Paso’s Duranguito neighborhood, banners with images reproduced from “Uncaged Art” were displayed along a chain-link fence in this heavily Mexican neighborhood, which many historians consider the city’s birthplace. The idea was to bring the children’s art “to the people to whom it matters most,” said Daniel Carey-Whalen, the director of the Centennial Museum.

But one day last month, city officials, citing strong winds and sign ordinances, ordered the banners to be taken down, much to the chagrin of residents like Frank Mendez, an 80-year-old retired laborer.

“Those kids from Tornillo way over there wanted to show the world how to paint,” he said, with a pained look on his face. “Those designs came from their brains. That’s the future they took away.” 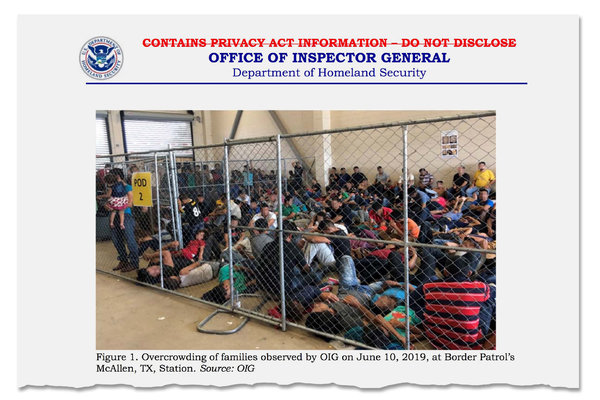 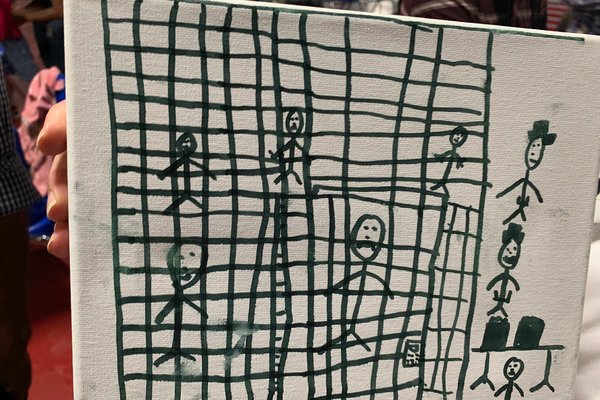