And Legend’s wife, the model and cookbook author Chrissy Teigen, wasted no time in poking fun at her husband’s new title.

She first tweeted about fulfilling “my dream of having boned People’s sexiest man alive!! an honor!!!!!”

Teigen later revealed the couple’s children, Luna, 3, and Miles, 1, “do not care” about the accolade:

Teigen joked she “cannot WAIT for people to get mad” about the announcement, quipping it’s “all downhill from here.”

She also changed her Twitter bio to inform the world she is “currently sleeping with people’s sexiest man alive.” 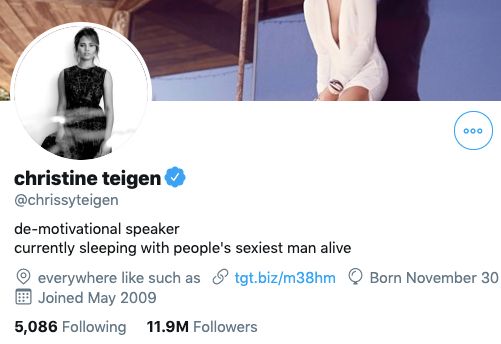 Legend does not appear to have publicly responded to his wife’s wisecracks.

But he did suggest that the 1995 version of himself “would be very perplexed” to follow in British actor Idris Elbas’ footsteps with the win:

Legend also showed off a chain featuring his new acronym, given how he has previously won Emmy, Grammy, Oscar and Tony awards.

“I was excited, but I was a little scared at the same time because it’s a lot of pressure,” Legend told People. “Everyone’s going to be picking me apart to see if I’m sexy enough to hold this title. I’m [also] following Idris Elba, which is not fair and is not nice to me!”

Elba, who won the magazine’s title in 2018, congratulated Legend with this dig at fellow actor Dwanye “The Rock” Johnson, who won the award in 2016. (Legend’s “The Voice” co-judge Blake Shelton won in 2017.)