Stars of Four Weddings and a Funeral reunited for the first time in 25 years to help Comic Relief raise £63m.

In the mini sequel, Rowan Atkinson returned as the bumbling vicar – this time presiding over the daughter of the two original leads, Carrie (Andie MacDowell) and Charles (Hugh Grant).

The show also saw the return of Keeley Hawes in a Bodyguard spin-off. 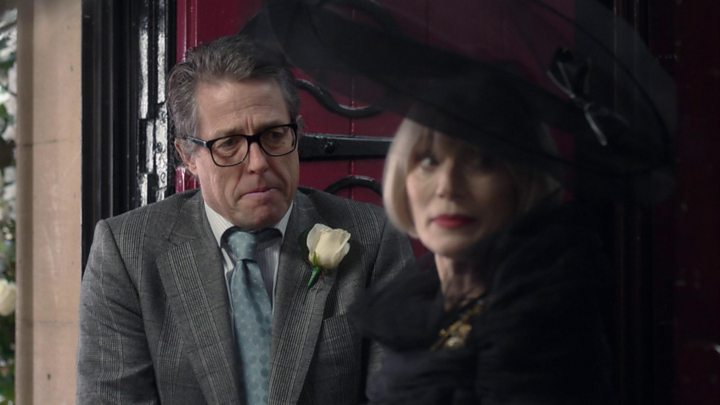 The Four Weddings sketch – One Red Nose Day and a Wedding – also starred Alicia Vikander, who won an Oscar for her role in The Danish Girl, as Miranda’s new wife.

Sam Smith made a cameo as one of the wedding singers in the short film, presided over by Comic Relief co-founder Richard Curtis, writer of the original film.

There were plenty of jokey references to Four Weddings, including its most-quoted line – as Grant’s character claimed that he “hadn’t noticed” it was raining.

The segment featured many of the returning cast – and a special mention was made of Scarlett, played by actress Charlotte Coleman, who died of an asthma attack in 2001.

Her co-star Richard Madden had already been given a new job – protecting a new prime minister played by Joanna Lumley – and was with her in a car when Montague was found in the boot.

Hands up if you loved our Body Guard sketch on tonights #RedNoseDay2019?! 🙋‍♀️🙋‍♀️ pic.twitter.com/OJC9k1ejBU

This year’s Red Nose Day telethon also saw a dip in ratings, with an average of 5.6 million people tuning in – 600,000 fewer viewers compared to 2017.

The highest amount the event has raised so far was £108.4m in 2011, once all the pledges had been redeemed.

Half the money raised from Comic Relief goes to causes in the UK and half to those around the world.

The fundraising TV show also featured an appearance from Little Mix – who looked less than impressed when former shadow chancellor Ed Balls had a go at singing one of their biggest hits, Shout Out To My Ex.

The chart-topping band and the Strictly Come Dancing favourite were among a number of celebrities who climbed Africa’s highest mountain Kilimanjaro to raise more than £2m towards the show’s final total.

Former England football captain David Beckham again teamed up with James Corden to poke fun at his own previous fashion choices, in a comic video monologue at the start of the night.

But One Direction star Louis Tomlinson pulled out of his planned performance following his sister Felicite’s sudden death. this week.