The Detroit Institute of Arts is taking steps to improve its workplace culture following a critical review by outside investigators who said they had fielded employee complaints of retaliation by the director whose autocratic leadership style, they said, had fostered an environment that led a disproportionate number of women on staff to leave.

The findings of the review by the law firm Crowell and Moring, which was hired by the museum, were presented to members of its board in November but were not made public.

The investigators, from the Washington, D.C., office of the law firm, also said that current and former staff members they had spoken to complained that the director, Salvador Salort-Pons, demonstrated a “lack of facility with race-related issues,” according to an audio recording of the board meeting at which the investigators presented their findings.

The museum said Monday that it had taken a number of steps in response to the findings, including establishing a new board position to be a liaison between staff members and the board of directors. It has also set up a confidential hotline for reporting discrimination, retaliation or other workplace issues.

“The Board wants anyone with concerns, new or lingering, to come forward, and be heard,” the museum said in a statement. “The creation of the new Board Employee Relations Liaison position and regular availability to staff who wish to directly communicate via the hotline underscore the D.I.A.’s commitment that any adverse conditions or experiences identified and reported by D.I.A. staff will be addressed going forward.”

The law firm’s review included interviews with 22 current and former staff and board members and a review of attrition data going back to 2016, according to the audio recording of the discussion. The recording was obtained by Whistleblower Aid, a nonprofit law firm in Washington that represents some museum staff members, and was reviewed by The New York Times. 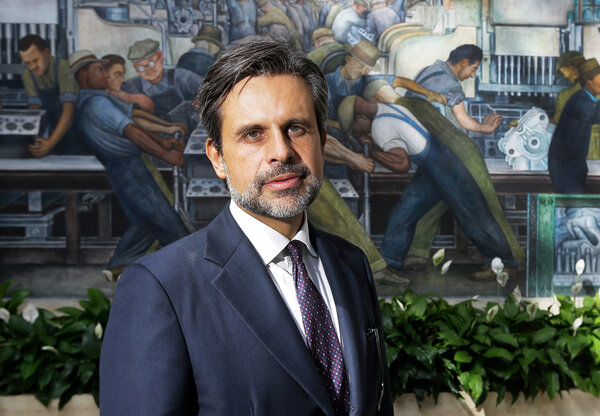 The investigators said employees complained that Salort-Pons was intolerant of dissent and said he had punished staff members for disagreeing with him or making complaints, leading to some being excluded from meetings or demoted. The fear of retaliation, the investigators said, had made some former staff members unwilling to come forward to talk to them, and they said that this fear of retaliation was more pronounced than among many other nonprofit organizations with which they had worked.

“The former employees and current employees described the leadership as frankly one that did not give them the direction that they needed,” a Crowell and Moring lawyer, Preston L. Pugh, told the board at the meeting.

In a statement, Salort-Pons did not directly address the criticism, but said, “I appreciate the opportunity to continue this important work in partnership with our staff and Board to shape a culture for the D.I.A. that reflects our values and shared vision for the future of the museum.”

The museum did not address a question that asked whether the director, whose five-year contract had been scheduled to expire at the end of last year, had signed a new employment agreement. In its statement, the museum said: “Salvador’s role and responsibilities as D.I.A. Director, President and C.E.O. will continue in 2021. His performance is regularly monitored by the Board’s Executive Committee to ensure progress continues to be made in fostering a workplace where all employees can thrive.”

The investigators raised a concern about a lack of consistent oversight of Salort-Pons who they said, in one instance, had conducted his own performance review, which they said was unusual for someone at his level.

The museum said that since September, the director had been working with a leadership coach “to support his efforts in creating a work environment where all employees feel valued for the talents, skills and unique perspectives that they bring to the D.I.A.”

Salort-Pons has been credited with helping to secure the ongoing financial survival of the museum following a turbulent period when the institute was saved by the infusion of nearly a billion dollars from foundations, private donors and the State of Michigan. The investigators said employees they spoke to said they respected his efforts in this regard.

He has retained the support of the board, and last year the institute persuaded three surrounding counties to agree to continue a property tax surcharge that helps support the museum.

But morale was so low in 2017 that nearly half of museum staff said in a survey that they did not believe the institute provided a work culture where they could thrive, citing disrespect and a sense that their opinions were ignored. The review by Crowell and Moring found those problems had not been addressed in a meaningful way.

Last year, just as issues of culture and diversity roiled museums across the country, current and former employees came forward publicly with complaints, particularly about the institute’s treatment of its Black employees.

In September, the institute hired a Chicago-based diversity and inclusion consultancy. The consultancy, Kaleidoscope, has carried out a survey of employees and is organizing staff focus groups on issues such as equity and diversity. “The Board is fully committed to addressing these concerns and shared that commitment with our staff in December,” Christine Kloostra, a spokeswoman, said of the review’s findings. “At all levels of our organization, we’re working hard together to make the D.I.A. a better place for all of our team members.”

Reviewing employment data, the investigators found that a greater number of women in managerial and professional positions than men had left the museum in recent years. In 2018, for example, it found that 27 percent of women employed by the museum in managerial and professional positions had departed that year, compared to 2 percent of men. In some cases, Ellen Moran Dwyer, one of the investigating lawyers told the board, women said they had left even though they had no other job “because they were unhappy with the environment.”

Whistleblower Aid said the outside review’s findings showed there is a need for more substantial change to address serious problems their own clients brought forward several months ago.

“It’s got to the point where people are so desperate for accountability and change that they are taking this kind of step” to leak the recording of the board meeting, said John N. Tye, the founder and chief executive of Whistleblower Aid.

Some staff said they would wait to see whether the steps the institute is taking would make a difference in addressing the challenges.

“There is a glimmer of hope that something is being done,” said Margaret Thomas, house manager of the Detroit Film Theater, which is part of the institute. “This whole situation should not be swept under the rug.”

She added, “I want to believe that something is going to be done about this.”