But by one measure, the Trump presidency ended in mid-November, when online conservatives went bonkers over a picture of Harry Styles in a dress.

The photo of the British singer on the cover of the December Vogue prompted the YouTube personality Candace Owens to tweet, “Bring back manly men.” To Ben Shapiro, the photo shoot was an assault on the concept of manhood itself: “Anyone who pretends that it is not a referendum on masculinity for men to don floofy dresses is treating you as a full-on idiot.”

What does all this have to do with the president’s impending exit? First, it suggests that other conservatives are retaking the role of Troll-Warrior-in-Chief that Mr. Trump conferred on himself.

But it’s also a reminder that the kind of button-pushing cultural politics that predated him — that in many ways helped make a President Trump possible — will survive his tenure.

A million years ago in the Obama era, proxy wars over culture were handled on the periphery of conservatism, in social media and right-wing talk. It was the era of the Gamergate attacks on feminists in the video gaming community, of umbrage over the foreign-language lyrics of a Coca-Cola commercial and over a female-cast reboot of “Ghostbusters.”

With the election of President Trump, a pop-culture figure himself who intuited the connection between cultural fandom and political tribalism (he himself made a “Ghostbusters” outrage video the year he announced his campaign), the political and culture-war wings of conservatism merged.

For four years, we had a president whose portfolio of concerns included protests at N.F.L. games, speeches at TV awards ceremonies, the loyalty of Fox News and the reboot of “Roseanne.” He scoured and fretted over Nielsen ratings — his own and those of shows he saw as allies and enemies — with the intensity a wartime president might devote to troop movements.

Now, with a waning Mr. Trump self-soothing with OANN and Newsmax and tweeting out the elaborate sci-fi serial that the election was stolen from him, command of that battle is returning from the White House to the field. 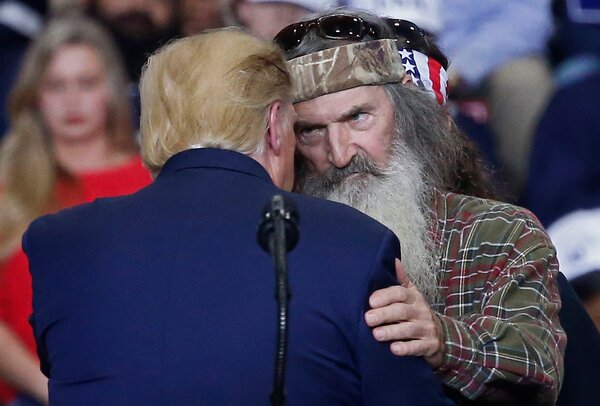 For decades, the expression of politics through culture war has been a staple of conservative media. Andrew Breitbart, the right-wing online publisher, declared that “politics is downstream from culture” (borrowing an idea from Marxist theorists like Antonio Gramsci). Fox News made an annual production of the “war on Christmas” (with occasional spinoffs like “Santa Claus and Jesus are white”).

The appeal was emotional; people have a personal connection to family holidays and their favorite shows that they don’t to, say, marginal tax-rate policy. But it was also a way to appeal to a specific audience in a country where, increasingly, people had not just different political beliefs but entirely different cultural experiences.

As far back as the early 1970s, the “rural purge” in TV — which eliminated bucolic sitcoms like “Green Acres” to make room for urban ones like “All in the Family” — reinforced the idea that there were different Americas with different, and even competing, popular cultures. This dynamic only spread with cable TV and the internet, which sliced and diced us into a nation of niche demos, sharing a geography but occupying different psychic spaces.

As the historians Kevin M. Kruse and Julian E. Zelizer write in “Fault Lines,” their study of American polarization since the 1970s, all this led to “a world with fewer points of commonality in terms of what people heard or saw.” This was true in politics and in entertainment, and the two often overlapped.

There was now identifiable red and blue pop culture. A 2016 Times study found a TV divide that mirrored the rural-urban split in the election. “Deadliest Catch,” the reality show about Alaskan crab fishing, was popular in red America; in blue zones, “Orange Is the New Black,” the Netflix drama and critique of the prison system.

A 2014 poll found that 53 percent of Democrats, compared with 15 percent of Republicans, believed “Twelve Years a Slave” should win the best-picture Oscar. Neither party had taken a position on the movie; the culture war was just well-enough ingrained that people could intuit where their side would land, just as the Iraq War movie “American Sniper” became a conservative favorite and liberal target.

Knowingly or not, audience members enlisted in the culture war as volunteers. For conservatives in particular, the liberal tilt of Hollywood was a useful font of grievance, allowing them to claim cultural victimhood no matter how much political and judicial power they held.

And people increasingly saw their favorite stars as their proxies and champions. When Phil Robertson, the bayou patriarch of “Duck Dynasty,” was briefly suspended from the reality show in 2013 for homophobic and racist comments, one America saw it as political correctness taking down a beloved star for speaking his mind. Another America — if they had ever heard of “Duck Dynasty” at all — saw a bigot getting what he had coming to him.

All of this, in retrospect, was an advance trailer for the it-came-from-“The Apprentice” Trump era.

Politicians, especially on the right, have dabbled in culture war before: George H.W. Bush vs. “The Simpsons,” Dan Quayle vs. “Murphy Brown,” Bob Dole vs. rap. But their forays tended to be awkward, tone-deaf and often as not, self-defeating.

But Mr. Trump, a child of TV who made himself into a TV character as an adult, understood media instinctively. It was where he lived, ever since he gave up his youthful fantasies of running a movie studio, vowed to “put show business into real estate” and forged his tabloid persona in the 1980s.

Having used media to build a reality-show career and a business-success myth, having experienced the rush of primetime celebrity, he knew that culture makes the kind of gut connection that mere politicians can only dream of. Ordinary politics argues: Those other people don’t believe what you believe. Culture-war politics argues: Those other people don’t love what you love.

So Mr. Trump’s campaign, as much as it was about wall-building or Islamophobia or “law and order,” was also about a promise to defend and uphold his followers’ culture over the enemy’s. His rallies combined a concert vibe with the theatrics of pro wrestling (another genre Mr. Trump had experience with).

To an audience that had been told for years that showbiz celebrities disdained their values, here was one of their celebrities, a real celebrity from TV, taking their side. An alt-rightist essay on Breitbart.com hailed the erstwhile NBC host as “the first truly cultural candidate for President” since Patrick J. Buchanan, the CNN “Crossfire” co-host who declared a “cultural war” for “the soul of America” at the 1992 Republican National Convention.

Trump’s 2016 RNC didn’t have a lot of high-profile politicians, but it did have a “Duck Dynasty” star. As president, he gloried in inviting conservative celebrities like Kid Rock and Ted Nugent (who once called President Obama a “subhuman mongrel”), as well as the newly conservative-curious Kanye West, to take photos in the Oval Office.

The pictures felt like spoils of war, a political end-zone dance. And his fiercest celebrity critics often played into his me-vs.-Hollywood narrative, cursing him out at the Tony Awards or feuding with him on Twitter.

He praised Western culture as superior because “we write symphonies,” tooting a white-nationalist dog whistle from the orchestra pit. And he threw himself wholeheartedly into fights like the one over ABC’s reboot of “Roseanne,” whose star, Roseanne Barr, had become a real-life, vituperative Twitter Trumpist, and which worked her politics into the story lines.

He didn’t, like previous presidents attending the Kennedy Center honors or sharing a something-for-everyone Spotify playlist, see culture as a way to find common ground. He saw it as a battleground with winners and losers, and one full of opportunities to inflame divisions.

When the “Roseanne” premiere dominated the ratings, he crowed about it as his team trouncing the enemy. “It’s about us!” he told a crowd of supporters.

Later, when ABC fired Ms. Barr from the show over a racist tweet, Mr. Trump joined the argument, not to condemn Ms. Barr’s remarks but to accuse the network of hypocrisy because of “HORRIBLE statements made and said about me on ABC.” It echoed his Twitter attack on the network in 2014 when it picked up the sitcom “black-ish”: “Can you imagine the furor of a show, ‘Whiteish’! Racism at highest level?”

His fixation on ratings (dating back to “The Apprentice,” whose ratings he routinely lied about), vibed with his worldview of competition and scorekeeping. Fights about representation, American identity and the boundaries of acceptable speech aligned with messages expressed, in more blunt and ugly ways, by Mr. Trump’s campaign and supporters — especially the insidious language of “replacement.”

“Now they’re making ‘Ghostbusters’ with only women. What’s going on!” was a way of telling men that he would protect them from becoming superfluous. “We can say ‘Merry Christmas’ again” was a way of saying: Your culture used to be the assumed default in America, and I’m going to bring that back. The enemy wants to demote you to a supporting player; I’m going to make you the star again.

Much of this, of course, was a reaction to the expansion of the American story implied by the election of America’s first Black president and by the representative pop culture of Obama’s era, like “black-ish” and “Hamilton.” Often, there’s a sense (at least in retrospect) of a new cultural era beginning with a new presidential administration: JFK, the New Frontier and youth culture; Reagan, “Family Ties” and “greed is good.”

Though the Biden administration has yet to begin, it doesn’t feel like that kind of definitive shift at the moment, so much as the flag moving to the other side of the centerline in a continuing tug of war. Things may get quieter on the surface; Mr. Biden is neither as big a pop-culture guy nor as zealous a culture warrior as the president he’s replacing.

But as every tempest over a Vogue cover proves, the fight goes on. The divides are too deep, the incentives for widening them too great. Whether Mr. Trump continues to have a major part in this after he leaves office, or whether his ratings ragetweets simply echo in some musty corner of the internet, the ongoing narrative he has left us with will continue.

The secret of a long-running show, after all, is that it can survive a cast change.