One recent afternoon, the curator Cosmin Costinas was discussing the challenging past year from Para Site, the nonprofit gallery he leads on the 22nd floor of a building in the Quarry Point area of Hong Kong.

“When everything that we took for granted was upended,” he said in a video interview, his team asked: “Why should we survive as an institution? What are art institutions for in the first place?”

They thought about how Para Site could respond directly to the urgent moment. For art organizations “to really justify their presence,” said Mr. Costinas, the gallery’s curator and executive director, “they need to be embedded in the community.” 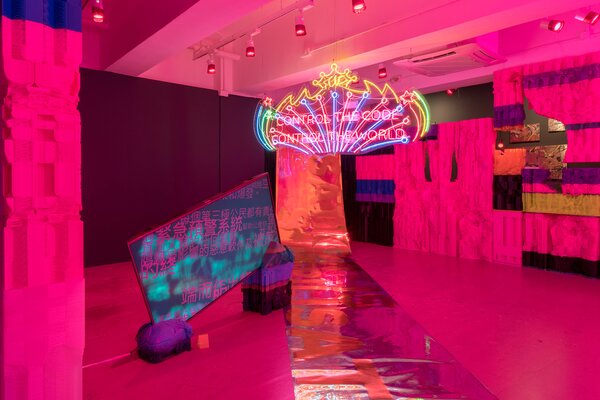 During the pandemic, Para Site, one of Hong Kong’s oldest independent galleries, formed a coalition with 16 other nonprofit art groups — big and small, established and just starting out, many artist-run — under the name Hong Kong Collective Independent Art Spaces. In exchange for individual donations of 400 Hong Kong dollars (about $52), it offered posters that artists had made as part of 2020Solidarity, a global initiative, and divided the proceeds equally among its members.

As in other art capitals with big-league art dealers and art fairs, such independent galleries “allow for less-mainstream talents to be seen,” said John Tain, head of research at the Asia Art Archive in Hong Kong. “What’s distinctive about the scene here is that real estate is notoriously expensive, but artists have found ways to support these spaces.”

Each group in the sale got the equivalent of about $490 — not a fortune, but “for us, it’s a big deal,” said the artist Kay Mei Ling Beadman, whose four-year-old Hidden Space was a recipient. “We don’t have any funding. We work on air.”

Hidden Space occupies 300 square feet of Ms. Beadman’s studio in an industrial building in the Kwai Hing area. She and two fellow artists, Isabella Ng and Katie Ho, invite peers to do ambitious projects there.

“Hong Kong artists have small studios, and the only time they go big is when they can realize a show,” she said. One, Ayumi Adachi, filled the gallery with a delirious installation of tracing paper covered with ink lines.

Hidden Space is by no means the most compact such location in town. The artist Man Tin has organized shows since 2017 at Précédée, a shallow, glass-faced storefront on a busy stretch of the Yau Ma Tei neighborhood. It is just big enough for a few people to stand inside, and its exhibitions — by Ip Wai Lung, Kacey Wong and others — can be viewed from outside 24 hours a day (ideal during a pandemic).

Mr. Tin teaches digital art at the Open University of Hong Kong and puts the money he once used to rent a studio toward his pocket-size gallery. “I want to show my students that if they want to have changes, they need to act,” he said.

Which is to say that such spaces frequently adopt unusual operating models, not just new artistic ideas. The veteran 1a Space, in a former slaughterhouse in the To Kwa Wan area, organizes shows, residencies and a mentorship program for art critics, and is starting a performance festival.

“Part of our mission is making contemporary art accessible and fun,” said Juliana Chan, 1a’s gallery manager. In normal years, it has given students tours of Art Basel. This week it will host open studios with its six artists in residence.

Para Site, which has a multigenerational group show called “Curtain” on view, now offers dental and health insurance to artists while it collaborates with them (largely unheard-of in this precarious field). It also awards no-strings-attached grants to local artists. (It is well positioned to do so, with an auction gala, donations and public money supporting its 4,500-square-foot operation — an impressive rise from its humble beginnings as the creation of seven enterprising artists 25 years ago.)

While Art Basel can be an ideal time for local outfits to draw attention, not everyone gets in on the action. Hidden Space does not even stage shows during the fair. “We don’t aspire to be part of the art-market circus,” said Ms. Beadman, who was to talk about independent spaces on a panel at the Basel satellite fair Art Central.

Others keep a fairly low profile year-round. On Lamma Island, 25 minutes by ferry from the bustling Central District, the artist Tiffany Sia has created a venturesome project space and residency program called Speculative Place in the house she shares with her husband.

It’s “an elastic space for artists, writers and filmmakers to work together and live together,” said Ms. Sia, who was born in Hong Kong and returned in 2018 after about 20 years in the United States.

Financed by the couple’s day jobs, Speculative Place has hosted artists like Carolyn Lazard, of Philadelphia, and Joshua Gen Solondz, of Brooklyn. With travel halted, Ms. Sia has shifted programing online and started a press.

This flurry of activity comes amid an uncertain time for Hong Kong, as China’s new national security law reshapes civil society, curtailing freedom of speech. At the same time that the South China Morning Post has reported that a downturn in retail has boosted scrappy art spaces, there is talk that artists with the ability to leave might head elsewhere.

Yet a certain transience has always been part of the local scene. In addition to that formidable rent, people have long come and gone during political shifts in this immigration hub. Some spaces “can be fly-by-night — they don’t last so long,” Mr. Tain said. But while they operate, they can foster vital communities.

“The public-facing things are kind of half the story,” Ms. Beadman said of Hidden Space. “Being able just to be together and talk and be open, that is one of the critical things that we want to do.”

Ms. Sia said that Ms. Beadman had pointed out to her that the names of some of these freewheeling enterprises are revealing. Beyond Hidden Space and Speculative Place, there are Rooftop Institute, Floating Projects and Parallel Space. Each is, she said, “almost self-conscious about the fact of its possible ephemerality or just its clandestine nature.”

“We’re part of a history and a scene that is people trying to do things for as long as they can do them,” Ms. Sia said.